Never in the history of the world has it been easier to get incredible content inexpensively and conveniently.  Warner Brothers seems to think that is a dumb trend and is headed in the opposite direction. 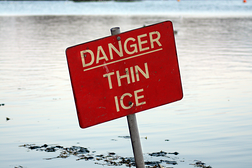 night when a Warner Brothers marketer decided to deliberately and abruptly interrupt me.  After hitting “play” to watch the movie Invictus , instead of South African rugby I was greeted with a barrage of unskippable movie trailers.

I tried in vain to push all the buttons on the remote that might enable me to get past the unwanted nuisances.  I pushed “Top Menu”; no luck.  How about “Pop-Up Menu”?  Nope.  A simple message would appear on the screen saying: “cannot operate”.  Did the DVD magically and suddenly forget what the menu button is supposed to do?

Fine, I figured I would just skip the trailers one-by-one by pressing the skip chapter button; “cannot operate”.  Some swearing ensued followed by a desperate attempt to outsmart the DVD by ejecting the disc and then restarting it while pushing the menu buttons really fast.  No dice.  The only thing I could do was play each trailer at 3x speed, one-by-one, as each new trailer would put an end to my fast forwarding.  There is nothing more emasculating than not being able to control your own DVD player.

In a world with ever increasing choice of quality content, Warner Brothers has made a decisive move to worsen the user experience of their product.  There is only one reason to disable the DVD functions during the previews; to try to force people to watch ads that they don’t want to see.  Where is my “unsubscribe” button?  Where is my do not call list?  Why can I not opt out of this unwanted advertising?

Warner Brothers decided they wouldn’t just settle for a degraded user experience, they also wanted to make inroads in decreasing the distribution of their product.  Back in January, Warner successfully executed an agreement with Netflix (a company that has experienced huge success by making it easier to rent DVDs) that prevents Netflix from renting Warner movies until four weeks after they have been released.  A similar deal was signed in February with another innovator in the movie distribution space, Redbox, also preventing them from renting movies until four weeks after the initial release.

Then in March, Warner Brothers decided to embrace the least innovative movie distributor in the space, Blockbuster, by actually signing a new contract allowing them to continue to rent DVDs immediately after they are released.  It’s almost as if they noticed that Blockbuster lost $435 million in the fourth quarter of 2009 and thought: maybe we shouldn’t hurt the people who distribute our product.

Is it really good for business to force DVD renters to watch movie trailers?  Is 2010 the year to start clamping down on the distribution and availability of your content?  In a world that gives movie enthusiasts a plethora of ways to view movies, some legal and some illegal, I would argue; “no”.

The DVD business is struggling right now.  According to the LA Times , first quarter of 2010 data show that “U.S. DVD rental revenue fell 14% from a year ago” and DVD sales were down 13% in 2009. The economy is being blamed, and of course piracy is always an easy excuse.  In any event, forcing customers to watch commercials they don’t want to see on DVD’s they could only rent from one store cannot be helping.

Today, huge quantities of content are available free of charge everywhere.  To compete, create high quality content and then give people a great user experience by making it easy to find and consume the content.  There are plenty of options out there and anything less will send potential customers elsewhere to get a more gratifying experience.

Warner Brothers, go read Inbound Marketing and I want my 5 minutes back.

I would also like to give a special shout-out to Philips for inventing the technology specifically designed to prevent you from skipping DVD ads, patented here: http://bit.ly/9MFNe0 .  Thank you for helping to make the world just slightly worse.