In the world of advertising and outbound marketing, TV has been the undisputed king in large part because of an ever-growing audience. For the first time in the history of cable television, the industry is seeing a decline in paid subscribers. This chart from Business Insider illustrates the decline as reported by the firm SNL Kagan. 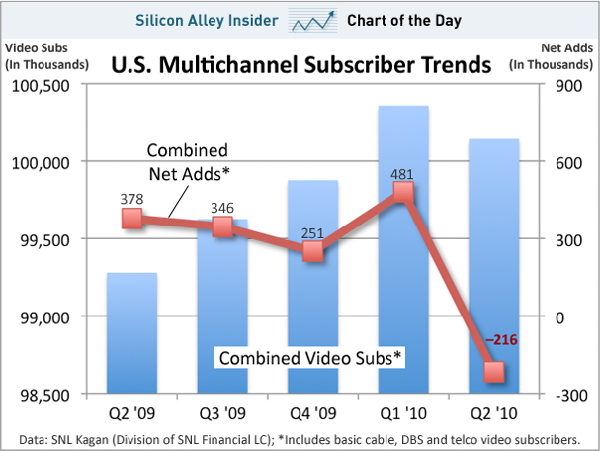 According to Kagan, the firm believes the decline in subscribers is due to poor economic conditions and not the rising online video market. This is despite the rise in the amount of video consumed on YouTube and Hulu and an economic downturn that began long before this reported decline.  Apple is rumored to be on the verge of releasing a new product that will bring video streaming and web applications to television sets. Should cable TV companies be worried about the future of their industry?

As more and more people consume content online through desktop and mobile devices, marketers will have to shift strategies to engage with changing audiences. As marketers, it is important to monitor customers' and prospects' behavior to determine how they are consuming information.

Have you noticed a changed in your customers' information consumption habits?