How a Senator Uses Social Media At 29, Benjamin Downing is Massachusetts’s youngest current State Senator, and serves the largest Senate district in the Commonwealth, representing 48 communities in Berkshire, Hampshire and Franklin Counties. He is also the Chair of the Joint Committee on Revenue, Vice-Chairman of the Joint Committee on Higher Education, and is an active member of the Senate Committee on Ways & Means and the Joint Committees on Economic Development & Emerging Technologies, Consumer Protection & Professional Licensure and Veterans & Federal Affairs. 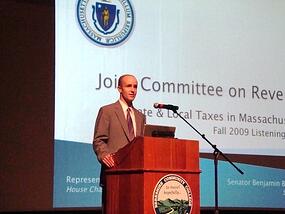 While the Senator’s legislative agenda for the 2009-2010 session focuses on promoting reform and recovery throughout the state , his day-to-day agenda always includes communicating with his constituents, a task he relies heavily on social media for. We recently got a chance to sit down with Ben to discuss his Facebook and Twitter usage (among others), and why he feels it is so important.

What Social Media channels do you currently use and how long have you been on them?

I use the platforms each in different ways, but the unifying theme/goal would be transparency. Very few people know what their elected officials do. Sure, they know we vote, give speeches, & campaign. But those are only small slivers of our day-to-day work. For instance, each day on Facebook, I sketch a rough outline of my daily activities. I generally do the same on Twitter, but in real time. On both, to varying degrees, I share articles about issues I am involved in, or I think merit passing along to my constituents/followers. Twitter serves the dual function of allowing me to connect with constituents & aggregating political news in one easy to follow place. Finally, social media helps close the distance between the 48 communities in my Senate district, which are the furthest communities from the state capital/major media market. I use my YouTube channel to post floor speeches from the Senate, so my constituents can see me debating with my colleagues and better understand why I voted how I did. For instance, during the 2010 budget debate, I posted every tax vote that was taken and why I voted for or against each one.

As I referenced previously, connecting with constituents through social media is important because traditional media rarely covers the legislature, because my constituents are so far from the capital, and because it provides another access point to me for the people & communities I represent. My constituents get a better Senator out of this, because I know better what their concerns are, and they are more informed about what I'm doing, which helps bridge the gap between the government & the people its supposed to represent.

At what point in your political career did you start thinking to yourself, "this is something that I need to do?"

After I was first elected (11/2006), I started to think I needed to do more to communicate through new media. It began with a weekly email to constituents who signed up and slowly I became more interested about how social media was evolving. It was at the same time that I was struggling with how to represent 48 communities, while learning the ropes in Boston, and there was, for lack of a better word, an "ah ha" moment, where I realized social media could help demystify my job & help me better serve those communities.

How could Social Media evolve to better help you spread your messages?

Social media still seems very clicky, very insular and based on "likes" or "following" or "friends" ... it's a lunch table in middle school and some people still aren't comfortable sitting down at it. I've seen a lot of campaigns, especially in tumultuous political environment like this, get on a media, build a list, then use it just like a press list. Thats the worse case scenario. The best case scenario is the social media is a means for constant conversation & feedback to improve your business, government, etc. I'm not sure what this all means, but it seems like thats the direction we're headed & the faster we get there the better off we'll all be.

1. Know Where Your Customers Are – Make an effort to understand what social media channels your customers use and why they use them. Some may be on Twitter, and not Facebook. Others might just use LinkedIn. Some may use all of the above. It should be your goal to have a presence wherever they are, and provide valuable information on those sites.

2. Transparency is a Sticking Point – Voters are just like customers, in the sense that the more they know, the better they’ll feel about doing business with you. Giving them the play-by-the-play of your decision-making processes, news and inner workings will create strong relationships and establish trust.

3. Unify on a Scale that Makes Sense – Senator Downing uses his social media accounts to bring all his constituents together. His “customers” all “purchase” the same way, by punching holes that correspond with their values and beliefs on Election Day. Your customers may all fit into one bucket. If they do, his strategy is spot on. If they don’t (maybe you have small business customers and medium size business customers), consider creating separate social media accounts for each of your segments, and tailor the messaging and communication accordingly.