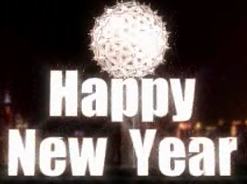 As the famous New Year's Eve Ball descends from the flagpole on top of One Times Square, there will be an estimated one million people in Times Square , over a billion watching as the clock strikes midnight.

A global tradition, where did the idea start and how has it continued?

2. There have been eight balls that have dropped in New York City's Times Square on New Year's Eve since 1907, when the ball dropping tradition began.  The previous four years had fireworks displays to bring in the New Year, also in Times Square.

3. The original ball weighed almost 700 pounds. It was made of iron and wood, but has since gone through many changes to become more lightweight and easier to maneuver.

4. Made of aluminum from 1955 to 1998, the ball was later replaced with Waterford Crystal and metal.

5. The ball was replaced by a giant apple in the early 1980's and was changed back to a ball after much debate.

6. The current ball, on duty since 2008, measures 12 feet tall, is embellished with 2,668 Waterford crystals, and has 32,256 LEDs to light its downward way. Too flashy for you?  Not in Times Square, where buildings are required to have at least one illuminated sign that stays lit until 1 a.m.

As a Times Square alternative, Scotland celebrates Hogmanay on December 31.  Hogmaney (no one is certain of the holiday's origin) traditions include fireworks and torch-lit processions in the cities and bonfires in the rural areas.  "First footing" is still observed; it is believed to be good luck for the first foot over the threshold to be that of a dark-haired stranger bearing a piece of coal, shortbread or whiskey.

What are you doing to bring in the New Year?