Twitter’s Population Growth: Where is everyone coming from?

In early December, Twitter posted that in 2010 alone they added more than 100 million new registered accounts and saw 25 billion Tweets. This impressive growth begs the question – where are all of these new users coming from?

Earlier this month, I posted an article about usage in the US with a map that illustrated how states compared to each other in terms of Twitter users per capita. If we compare the 2009 rankings to those of 2010, we see that 9 states made the top 10 both years in a row. The exceptions, however, were Maine (which fell down to the 11 th spot in 2010) and Utah which saw a huge jump from 43% below the average to 23% above the average. 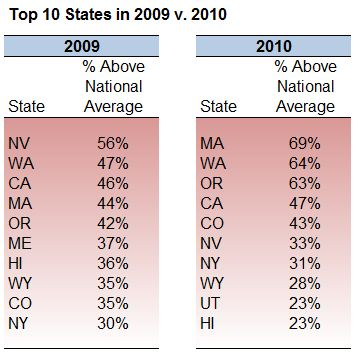 In fact, the top 3 states that saw the largest increase from 2009 to 2010 were Utah, Massachusetts and Oregon. After digging into this, it looks like there are several trends in these states driving more and more people to Twitter.

In Utah, for example, the state government began leveraging Twitter extensively in the summer of 2009 when it launched its new website , Utah.gov. The goal of the redesign was to facilitate communication with the residents of Utah.  One key component was the “aggregation of 27 state blogs and more than 100 Twitter accounts, helping users quickly find and subscribe to content that interests them.”  In addition to this, many of the sports teams for Utah's universities also caught onto the trend , using it as a way to communicate with fans and even for recruiting.

Massachusetts’s growth could be attributed to the popularity of Twitter among its marketing and advertising businesses and technology companies.  In 2009, the Boston Globe noted three Boston-based Twitter celebrities - Laura Fitton, C.C. Chapman, and Steve Garfield – who collectively have over 120,000 followers.

In 2010, Massachusetts also saw a lot of buzz in the Twittersphere around political campaigns and the 2010 elections.  Boston.com, the online edition of the Boston Globe, created an Election Tweets page specifically for the state’s 2010 elections.

Similarly, in Oregon, the Portland-based newspaper the Oregonian leverages Twitter to update and communicate with its readers.  The Oregonian was actually one of the first news organizations to start using Twitter, back in 2007, when central Oregon was experiencing major flooding.  The newspaper began aggregating tweets from locals residents in order to keep readers up to date.

As we see an increasing number of businesses and organizations jumping onto Twitter, we are bound to see more and more people join in an effort to stay up-to-date and engage with the companies they care about.