The Beatles and the Dead: The New Business Gurus?

This is a guest post from  Bill Stainton , a multiple Emmy Award-winning TV producer, writer, and performer; a professional speaker; and the author of The 5 Best Decisions the Beatles Ever Made: A Handbook for "Top of the Charts" Success .

I recently read a wonderful book called Marketing Lessons from the Grateful Dead by David Meerman Scott and Brian Halligan. Since I’d written a book extolling the business virtues of the Beatles, I was curious to see how these two iconic bands stacked up in the world of corporate smarts. In some areas I found that their methods (whether conscious or not) were similar; in others, they were miles apart. Here are three.

Scott and Halligan talk about the Dead’s state-of-the-art, 26,400 watt concert sound system—the Wall of Sound. It was a system that truly left other bands in the dust. The lesson, of course, is that businesses need to learn what is state-of-the-art in their industries, and embrace these new technologies to keep themselves ahead of the competition.

The Beatles, by contrast, didn’t have the luxury of a Wall of Sound. Most of their concerts were played through a meager 500 watts of amplification—less than some home theater systems today. Still, the Fab Four embraced what early technology they could. It was, for example, at their insistence that EMI Studios (now Abbey Road Studios) finally upgraded from four-track to eight-track recording capability. But more importantly, the Beatles readily embraced whatever technology was best for the job, whether it was new or not. Part of the background instrumentation on the song Lovely Rita consists of all four Beatles playing combs wrapped with toilet paper!

So yes, embrace technology…but remember that technology itself is just a tool, not the goal . 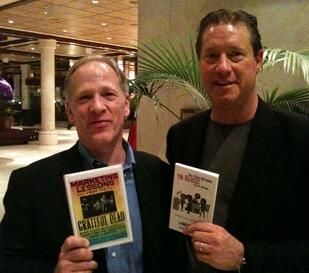 The Grateful Dead were famous for not just allowing bootleg recording of their concerts, but actively encouraging it. They knew that the more widely disseminated their music was, the bigger their fan base would become. The parallels to social media and Internet strategy are unmistakable: giving away content—which may seem counterintuitive—ultimately results in more customers and more profits.

Contrast this with the Beatles, who have just as famously kept a very tight leash on their music distribution (witness the almost Herculean efforts it took to get their 40 year old songs on iTunes). Pretty much the exact opposite of the Dead’s strategy, and yet both bands are immensely successful. What gives? What’s the difference?

Not so with the Beatles. After 1966, there were no concerts. If you got a free copy of the Sgt. Pepper album, you wouldn’t be inspired to go out and buy the product, because the album was the product. Instead, they put giveaways inside the album itself. Sgt. Pepper came with a series of cardboard cut-outs, and the subsequent White Album included glossy photos of the individual Beatles as well as a full-size poster.

The Grateful Dead were the ultimate jam band. In concert, their songs would become lengthy improvisations—sometimes brilliant, sometimes not so much. But that willingness to experiment kept it fresh, for both the band and the fans, and it made each Dead concert a truly unique event.

Nobody would mistake the Beatles for a jam band. Their concerts were short (around 30 minutes) and virtually the same, night after night. But it was in their recordings (particularly from Rubber Soul on) that the Beatles’ experimentation shined. Each album was unlike the one before; each was a risk (most of their fans didn’t want them to change); and each left the competition in the dust.

So although the Beatles and the Dead manifested their experimentation in different ways, they both understood the importance of shaking it up, of stretching the boundaries.

It’s as true in the rock world as it is in the corporate world: if you keep doing the same thing you’ve always been doing—even if you’re the best in the world at it—eventually the competition can catch up. And if you wait for that to happen, it may already be too late.

One band was together fewer than ten years, the other was around for thirty. One band thrived primarily in the recording studio, the other was the ultimate stage act. Different bands, different styles. But they both have one thing in common: they are unbelievably successful. And isn’t that a great model for us all?