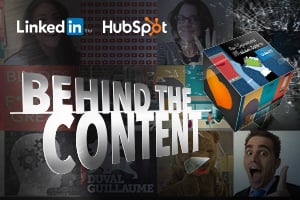 The year was 1997, and all the cool kids were watching MTV.

Meanwhile, over on VH1, a new series was just rolling out; a series that was actually about music ... and the musicians who made it.

That groundbreaking documentary series? Behind the Music. The first musicians featured in it? Milli Vanilli and M.C. Hammer. (Hey, the show had to start somewhere.) And almost 20 years later, the series is still alive and well.

Taking a cue from VH1's Behind the Music, we've teamed up with our pals at LinkedIn to bring you Behind the Content. In this new guide, we expose the true stories behind how (and why) some of the web's most captivating content came into existence.

While Behind the Content does not feature Milli Vanilli or M.C. Hammer, it does showcase some of the coolest content creators around from big brands, to agencies, to individual designers and developers.

Here's a sneak peek of some of the stories you'll find inside:

Section 1: A Dramatic Surprise on a Quiet Square (Duval Guillaume, for TNT) 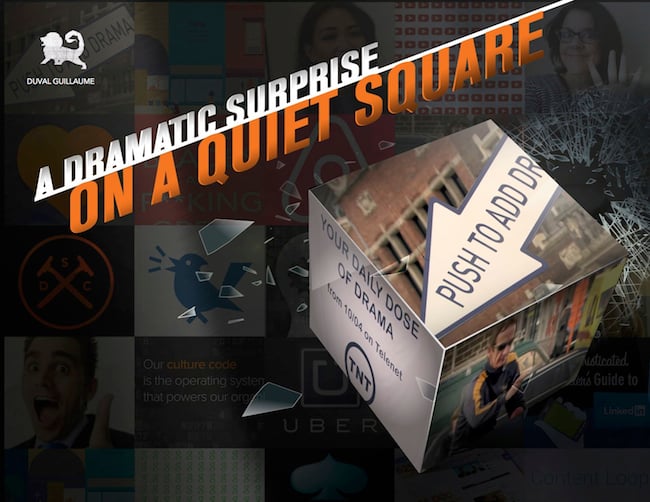 In order to launch a new high quality TV channel in Belgium, TNT needed to think out of the box. By adding a bit of drama to an average town, they did just that.

Where did the inspiration for the video come from?

"It came from the brand’s baseline: we know drama. We translated that into ‘We realize that when you add some drama to daily life it gets more interesting (when you’re a spectator)’. And that’s how we started creating. This video was one of the ideas that we presented, and the rest is history I guess." 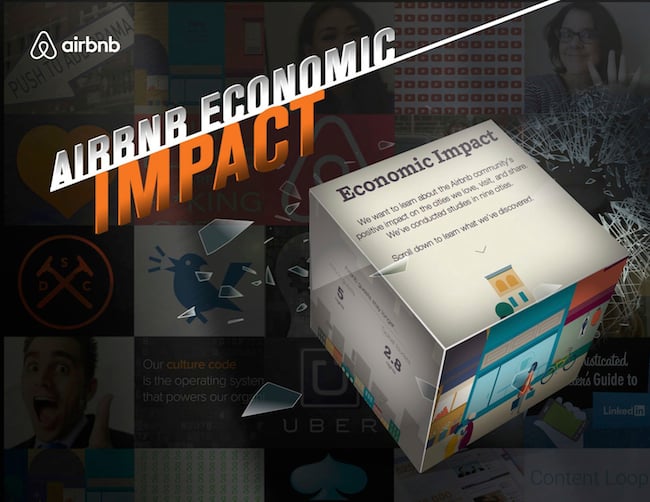 To better understand the economic impact of their users, Airbnb worked across departments and gathered detailed research on eight major cities around the world. This material was used to develop an interactive infographic which can be viewed perfectly on all mobile devices.

Where did the inspiration for the campaign come from?

"Over the last two years, Airbnb has been working with an external research and consulting firm to map out its economic impact.

We found that Airbnb’s guests have an impact on the local economies of a city’s neighborhoods. As Airbnb listings are more spread out over a city, the Airbnb guests bring more tourist money into neighborhoods which usually are not often visited by guests of the city who typically stay in a hotel. The data shows that 76% of the Airbnb’s you can rent in these eight cities are actually outside the main hotel districts.

So after conducting eight studies of several large cities around the world, we aggregated the information we found into the Economic Impact content piece." 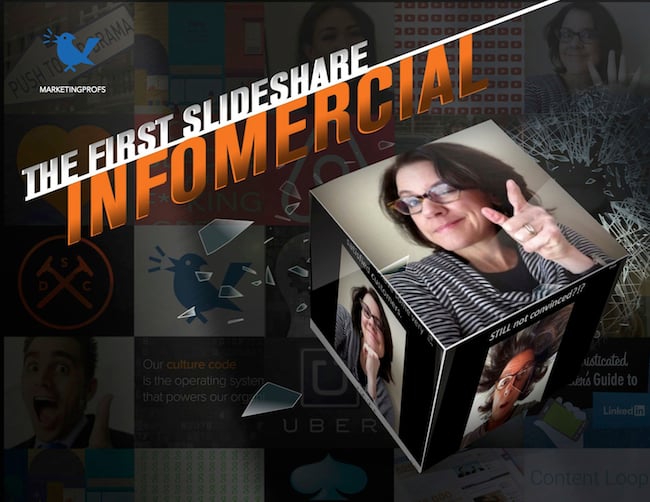 The crazy sleep schedule of a new mom combined with too much late-night TV brought about a one-of-a-kind infomercial for the B2B Forum.

"Corey was a new mom last spring, and so as a result she was awake at odd hours -- some of it spent watching lots of bad late-night TV. So the inspiration for the SlideShare Infomercial came from her watching actual infomercials. As I talk about on stage all the time, this is one case where we looked to analogy instead of example. We took the idea of an infomercial and spun it for a B2B audience with this mash-up."

Section 4: I Can Has UberKittens (Uber) 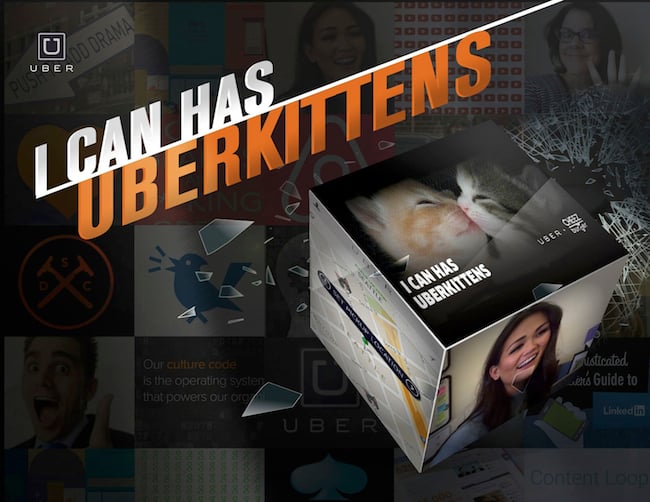 Uber wanted you to hop into an SUV full of snuggly cats during your morning commute. Too good to be true? We aren’t kitten around.

Where did the inspiration for UberKittens come from?

"Well, I love kittens. The idea basically stemmed from a dream of mine to be able to request an SUV and when you climb in there are a ton of little baby kittens climbing all over you for you to snuggle on your trip. Obviously, this would be a logistical nightmare but I wanted to make SOMETHING with kittens and Uber happen ..."

Section 5: One Second on the Internet (Steven Lewis) 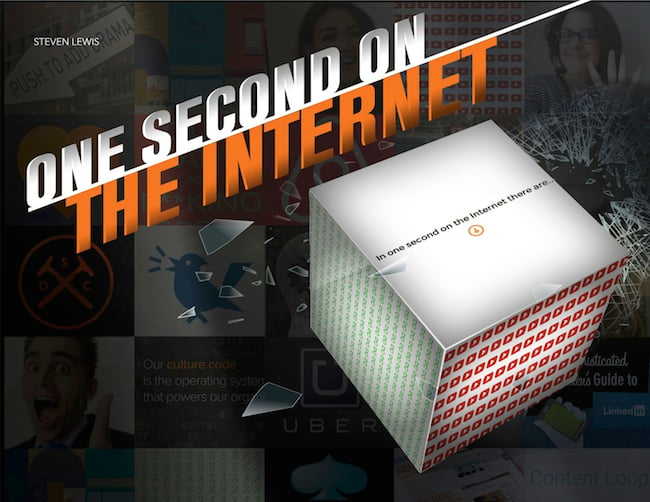 Steven Lewis wanted a new and simple way to present data. His website about the internet, shared on the internet, resonated incredibly well with his audience of—you guessed it—internet users.

Where did the inspiration for “One Second on the Internet” come from?

"As a designer, I notice new ways of presenting information online. I’ve come across a few sites that require a lot of scrolling to get the message. One I remember in particular compared the scale of people to planets and microbes, and required the viewer to scroll to zoom in and out. I also spent a lot of time looking at infographics and videos about the internet, which I used for research with my team. A big inspiration for this was all the videos and stats I came across that didn’t make much sense to me." 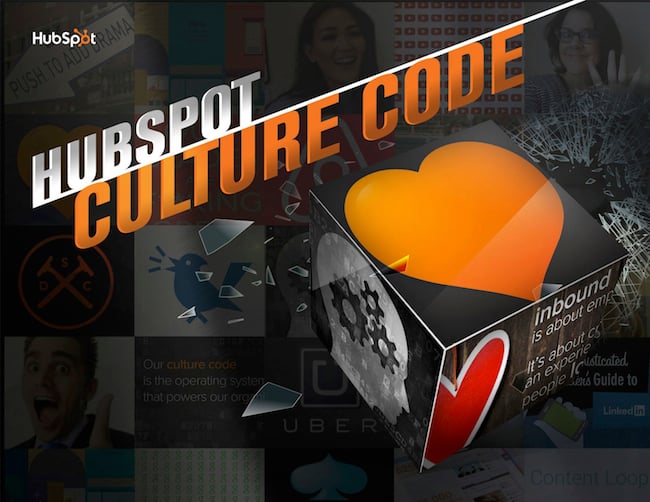 HubSpot wanted to identify the traits that would make an employee successful in their company. What we ended up with was so much more valuable than a simple list.

Where did the inspiration for HubSpot’s Culture Code come from?

"The early version of the Culture Code deck (written many years ago) was created first to help describe the 'people patterns' of success at HubSpot. The deck addressed the question: What are the attributes that make someone more likely to succeed at HubSpot?

In that version of the deck, we identified the following qualities: 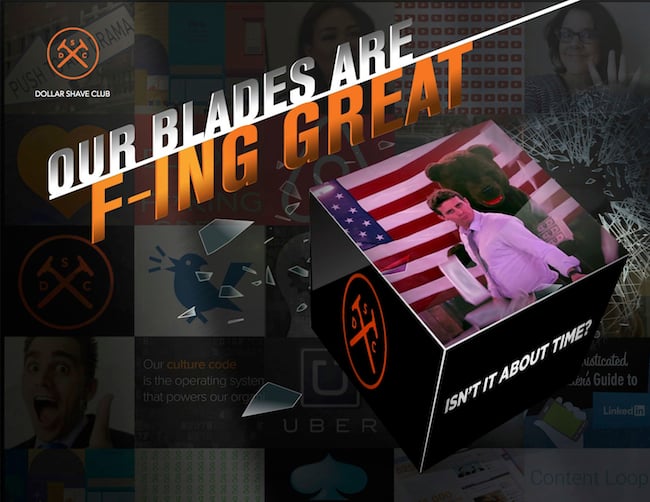 With no marketing budget, but a great sense of humor, Dollar Shave Club was on its way to becoming the go-to company for men’s bathroom needs.

Where did the inspiration for the video come from?

"I wanted to write something that captured the frustrations that men face when buying razors. Like many men, I threw out my razor only when I had to because I hated going to the local drugstore wasting time looking for the sales clerk to unlock that razor fortress. I knew there had to be a better way. We also wanted to incorporate humor in the video because I wanted it to be an essential part of the brand." 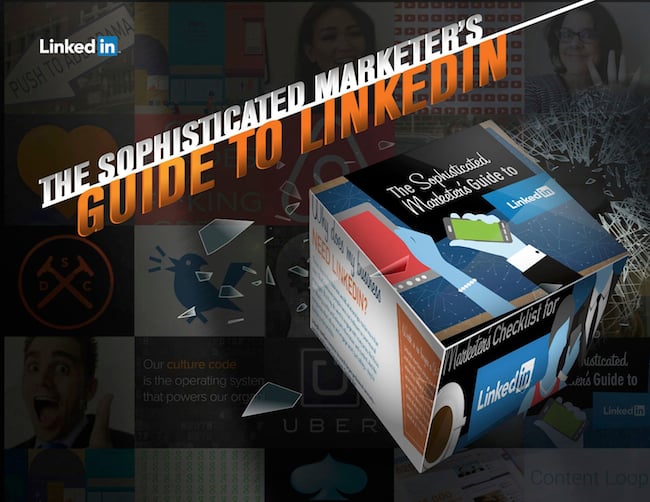 LinkedIn Marketing Solutions takes the advice of ‘think like a publisher’ to a whole new level. They created the all-encompassing guide to marketing on LinkedIn and achieved an astounding 21,000% ROI.

"The idea for The Sophisticated Marketer’s Guide to LinkedIn came from a jazz CD that I had been carrying around with me for a while.

The cover art was a mix of illustration and real photos; it was very Mad Men-esque and just screamed 'sophisticated.' That sparked the idea of the 'Sophisticated Marketer,' which in my mind is a marketer who embraces tried and true classic marketing techniques and mashes them up with very modern digital and mobile-first thinking -- a world-class marketer, if you will. I wanted the design to borrow from past nostalgia while bringing a modern twist to deliver the all-encompassing guide to everything a modern marketer needs to know to be successful on LinkedIn." 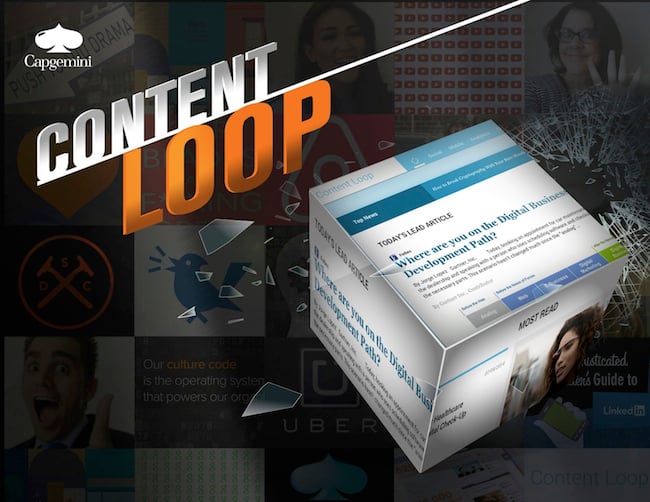 Capgemini set out to provide business decision-makers with relevant and powerful content via their LinkedIn profiles and discovered a new way to let decision-makers share innovative content with their teams.

"The inspiration came about from a realization that business decision-makers are fed an incredible amount of content across a number of channels and devices. Business and technology leaders may be interested and can only experience a selection of this content.

This is how the idea of proposing an added value service of curated content platform came to our mind. In a nutshell, Content Loop is about proposing a service to access the most relevant content from many sources, and even more powerful, to deliver the best content pieces to the discerning business leaders through their LinkedIn profile."

That was just a taste of what Behind the Content has to offer. To learn more about how the above pieces of content were created (and measured for success) be sure to download the full guide!

The State of Content Marketing in 2022 [Stats & Trends to Watch]