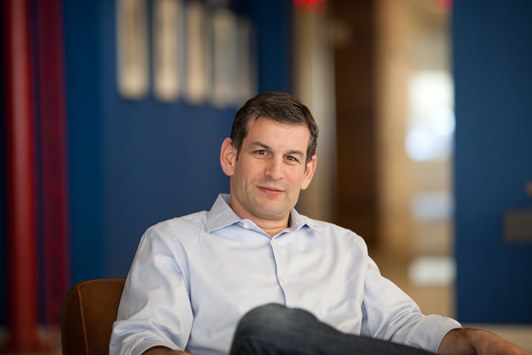 Jeff Rosenblum is a co-founder of Questus, a digital marketing agency with offices in San Francisco, New York and Brea, Calif., whose clients include Suzuki, General Mills, Capital One, and Universal Orlando.

He’s had a lot of success in the advertising world, so I was a bit taken aback when I met him for the first time and he immediately launched into a diatribe about how advertising needs a revolution, how people have learned to tune out ads, how the whole ad industry is stuck in the past and needs to be blown up and reinvented.

Rosenblum had such strong feelings about this subject that he made a documentary with the Questus team, The Naked Brand, in which he argues that companies should focus on improving their behavior more than they should focus on their messaging.

His message sounds a lot like the philosophy of HubSpot, where we believe that instead of interrupting people with ads and spam, companies can use inbound techniques to draw customers toward them. So I wasn’t entirely surprised that when I first met HubSpot CEO Brian Halligan he mentioned The Naked Brand and told me how much he liked it. It turns out others inside HubSpot have discovered the movie and loved it too.

Along those lines I thought it would be a good idea to introduce the readers of the HubSpot blog to Jeff Rosenblum.

Q. You released your documentary, The Naked Brand, about a year ago. How has the movie done?

A. It has done great. We’ve had screenings all around the world. The film is up on iTunes and it’s about to go on Bloomberg cable. It’s been great for our business and, I think, great for the industry. I thought someone might erupt in anger over it, but there’s been no backlash. In fact, I'm getting regular calls to screen and discuss the film. For example, I’m about to go to Dubai to talk about it because a bunch of executives in the Middle East are looking for alternative business models as they move beyond petroleum into other businesses. That's interesting because many of their emerging industries have a clean slate, unlike here in the United States and many countries, where we have legacy business models. Even though those models are being disrupted, the people who control the purse strings are slow to make changes. The revolution has just begun and many people don't know what the new model will look like because it really hasn't been established at scale. 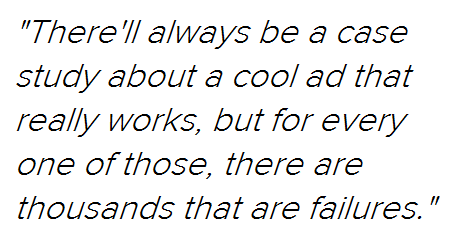 Q. What’s an example of the legacy model?

A. Traditional advertising, including digital ads. The massive proportion of marketing budgets are applied to paid media. The whole concept is antiquated. It’s not to say that advertising doesn’t work. Some ads work extraordinarily well and can do extraordinary things. The issue is that your money can be spent much more effectively and efficiently in other areas. There’ll always be a case study about a cool ad that really works, but for every one of those, there are thousands that are failures. I just saw some new data that says 86% of TV ads are ignored. We all grew up with the saying about how “Half of my ad dollar is wasted, I just don’t know which half.” Well, now it’s not 50%, it’s 86%. Those ads are just totally ignored. It's insane that so much money is spent on TV.

But, digital is not a cure all. comScore just put out a statistic that you’re more likely to survive a plane crash than to click on a banner ad. In fact, in the film we hooked people up to a machine that monitors brain activity, and we exposed them to banner ads. Nothing happened. The human brain doesn’t react. There's too much noise in digital and banner ads are simply too small.

Q. So why is there still so much advertising?

A. It’s just that the advertising revolution is in its infancy. Advertising has a role in the revolution but people don’t understand what that role is. Advertising should no longer be a vehicle for telling the entire brand story. Advertising should be a gateway to an immersive platform. Brands should focus first on their behavior and then brand evangelists will provide unprecedented levels of engagement with the brand and also carry the message forward much better than advertising ever could by itself. So, brands shouldn't try to tell the whole story via an ad. They should take some of their money away from paid media to create immersive, socially-connected platforms. Then, use paid adverting to build awareness about the platforms.

It's really an educational issue. Many brands are analyzing the data and first coming to the realization that we need an advertising revolution. There’s also an issue that most of the people at the top of the industry are much more comfortable with legacy systems. They’re 50, 60, maybe 65 years old, and what are they going to do? They went to college and graduate school then they mastered a technique over decades in the business world. But, the rules of branding changed almost overnight. A whole generation needs to retire, and then the folks who are digital natives need to take over. Slowly but surely, these legacy systems will change. The definition of advertising will be fundamentally expanded, and the role of advertising will change.

Q. Change to what? What’s the new role?

A. The definition of advertising will be expanded to anything that strengthens the relationship between a brand and its audience. Look at Red Bull. They’re sponsoring a big music festival here in New York. It runs for two weeks, and it will have thousands of fans. That’s advertising because it helps shift prospects to customers and customers to evangelists. The key is that Red Bull, in this example, is improving people's lives. That's the key to success. Since Red Bull is very far from a healthy or green product, it proves that any brand can do it. They could just buy a bunch of ads and say, “Hey, buy some Red Bull, it’s really good.” But who would care? Instead they say, “Hey, come to our music festival.” The ads are just the gateway to the immersive experience. They're not just using the creative canvas to spread a message, they're using it to pull someone into a bigger experience. 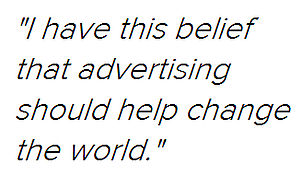 Q. The Felix Baumgartner space jump, which Red Bull sponsored and 8 million people watched live on YouTube, is another example of an immersive experience, right?

A. Yes, that’s exactly what I’m talking about. I have this belief that advertising should help change the world. We want to be the agency that bangs on that drum because we believe in our hearts it's true. It’s a bit of a ludicrous statement because advertising has historically been known more for being full of BS than being altruistic. But to me, what Red Bull and Felix Baumgartner did, that’s helping moving the human race forward. There’s a reason we want to explore space. It helps us find the limit to our potential. It’s the same DNA that sent Columbus to the New World. Governments used to pay for space travel, but they can’t afford it anymore, so now Red Bull is picking up the mantle. They’re pushing the world forward by looking at the potential of one human being.

And look at Red Bull’s metrics on that! Their retweets were up 90-fold. Half the marketing executives I know would use their own teeth to chew off their left arm to get that kind of metric. Red Bull is a young company. They’re doing really fascinating things. They made a movie, The Art of Flight. In Brooklyn they have Red Bull Creation, a kind of hackathon competition. One of the keys to success, I would guess, is that since they are such a young company, they are not saddled with legacy thinking and the addiction to advertising.

Q. You also say that instead of just spending huge amounts of money on advertising companies should first look inward and spend money on making themselves better, on improving their products.

Q. It seems to me that your philosophy overlaps a lot with what we’re trying to do at HubSpot. Our co-founders talk about megaphones and magnets, the idea being that instead being a megaphone and using outbound tactics to “spray and pray,” you’re better off becoming a magnet, and using content to draw customers toward you.

A. That’s exactly right. And it’s a great quote, talking about magnets and megaphones. That’s what we did. We could have made ads to promote ourselves. We could have made banner ads or 30-second spots. But instead we made a documentary, and it attracted an audience of like-minded people. And think how immersive that experience is. I got you and a bunch of other people to immerse yourselves for an hour. We never once mention Questus in the film, but our brand goes along for the ride because we invested in content. That's a great lesson from our tiny business that could be leveraged by huge corporations.

Q. Has the documentary helped you win new clients? Has it helped your business?

A. Yes, it has. It has elevated our profile. Also it has helped us change the conversation with our clients and with prospects. Clients come to us and say, “We need to do something revolutionary, we really want to make a huge impact.” So the documentary really helped us get our clients to behave in a more modern and less safe way.

Q. But do you still get clients saying, to hell with all this, we just want to run some ads on Facebook?

A. Sure, we hear that all the time. And, sometimes I push on the revolution when the timing isn't correct and I screw things up for the Questus team. Just recently we had a client sign on for a year-long engagement to help them figure out revolutionary tactics for their brand. But, they already had a media plan in place and they needed some banner ads for the short-term. I asked my team to go beyond the banners and do something revolutionary. But, the timing wasn't right. The client already had a media plan in place and it was out of his hands for the short-term.

Major corporations have many departments and many layers. They are large ships to turn and it takes some patience. We delivered the work, and the client basically said, “Look, you distracted your team and you missed the mark. We have a parallel path for revolutionary work, but I need these banners in the short term." 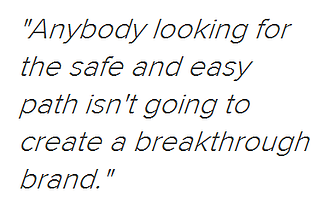 A. The two secret ingredients are patience and persistence. We’re going to continue to push brands in the right direction, but there is an established machine that we’re pushing against. Nine out of 10 people are still just looking to feed ads into the machine. But I’ll tell you something that surprised me. Over and
over again, as we did our screenings of the movie, afterward someone would come up to me in tears, saying “I wanted to be part of this industry but I wanted to do something bigger and better.” There is this movement that people have been waiting for. There really is a revolution taking place. It will take 10 years. But I promise you that in 10 years advertising will not look the way it does today.

How Brands Use NFTs for Marketing: Are They Really Worth The Hype?