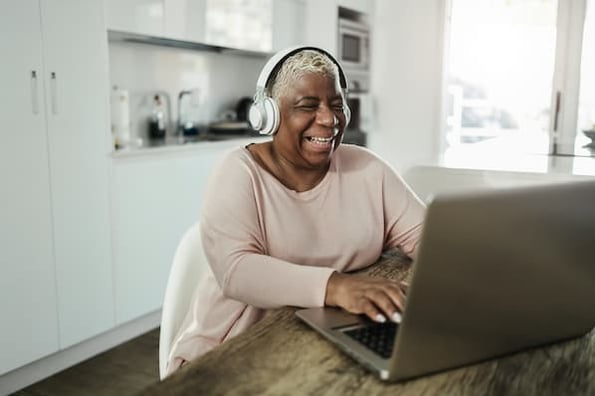 Fast forward to 2021, there's no official number, but we can assume that number has probably doubled. I mean, you can't stream a show or scroll on social media without being inundated with ads.

On YouTube, in particular, we've come to expect at least one ad per video. The question is, which ads are consumers paying attention to?

In this article, we'll cover the top YouTube ads of the last two years and what made them so effective.

The ad starts out simply enough with a woman admiring Amazon's Echo Dot. She then turns to the window, sees an ad for Jordan's movie "Without Remorse" and imagines a whole life in which Alexa is actually Jordan.

The audience takes this hilarious journey with her, as she enjoys life just a little too much with Jordan - that is until she snaps back to reality.

Here's why this ad is fantastic: It takes a product that can be hard to advertise and quite literally brings it to life with a celebrity, People Magazine's 2020 "Sexiest Man Alive" recipient no less.

A celebrity endorsement can definitely help boost brand awareness and recall, as long as they're well aligned. In this case, it made for a memorable and effective ad.

When you think of Nike, one word that probably comes to mind is "inspiration."

That concept is embedded in the brand's values and mission statement. It's also reflected in their ads.

Featuring some of the world's top athletes, this ad dives into the ups and downs of success.

Footage of athletes at their lowest moments floods the screen, as basketball star Lebron James narrates the journey. He describes the struggle of falling down and the ability to get back up.

Nike has found which messaging resonates best with its audience. As a result, they don't try to reinvent the wheel. Instead, they focus on recreating the same impact with influencers, celebrities, and everyday people.

The takeaway here is if it ain't broke, don't fix it.

This PSA is a personal favorite of mine.

You've got to admit: Any commercial with kids is usually a winner. But this one, in particular, stands out because it doesn't rely solely on cuteness as the hook.

In this ad, two children stand in their yard as they watch their parents argue about the installation of a basketball hoop.

The father reassures the mother that "it's all good" but all it takes is the hoop slamming to the ground for him (and her) to lose all confidence. The perspective then changes to one of the children as they encourage parents to visit a website for safer car rides.

How does it connect? Well, the idea is that the father has proven he's willing to do anything for his kids including "routinely test [his] handyman skills" and "the strength of [his] marriage." So ensuring his kids are safe in car rides should be an easy task.

Who said serious topics required serious ads? Often, humor is the best way to get the message across.

Making a decision isn't as simple as saying "yes" or "no." You often go back and forth discussing pros and cons, battling with different versions of yourself.

For instance, the indulgent me often struggles with the foodie me. One side says, "be conscious of the foods you eat," while the other screams "CAKE." That one usually wins.

This Zillow ad takes this concept and runs with it.

Susan, the woman featured in the ad, talks through selling her home and buying a new one with the various versions of herself, including Negative Susan, Spontaneous Susan, and Paranoid Susan.

The second best part of the ad – the first is when Late Susan sneaks into the meeting – is when Lazy Susan brings up the hassle of going through that process. Helpful Susan then brings up how Zillow is the solution to this issue.

What Zillow has accomplished here is tackle the objections consumers typically have about real estate in a relatable way. By understanding how their audience thinks and what they struggle with, they made an ad that was engaging and relevant.

Bad video connection? We've all been there.

The person you're video chatting with starts buffering and frozen for seconds at a time. After you've taken the embarrassing screenshot, it stops being funny and you wonder how long it's going to last.

The ad shows a new mom introducing her sister to her newborn. Unfortunately, just as the baby reaches the screen, the aunt's signal lags and causes her to freeze as her face shows disgust.

The sister inevitably mistakes the sister's facial expressions regarding the internet and takes it to mean something about her baby.

In just 30 seconds, the ad takes something that happens in everyday life and turns it into a funny, relatable ad.

Moral of the story: You don't always have to go far to create a great ad. They can come from the seemingly mundane parts of our lives.

Masterclass' top viewed video on YouTube is an ad for one of their masterclasses: the art of negotiation.

Despite having other videos that feature more household names, this seems to be the video that captured most viewers' attention.

Some will argue it's the content, and they may be right. I think it's the formula they used.

From the second this ad starts, it sucks you in with the statement: "Everything in life is a negotiation." From there, you're immersed in the world of the subject and narrator.

The reason this ad is so powerful is that it answers the most important question: Why should I care?

It tells viewers exactly how this relates to them, how they would benefit from it, and how they can use it in their daily life.

Unless your ad is product-focused, it should give them the answer to those questions.

Insurance companies are notorious for taking the funny route for commercials. Because how else do you market a product that's only needed in the event of something terrible?

Travelers Insurance did something different with this YouTube ad.

The brand told the story of a businessman passing his legacy, the family business, to his daughter. And they're able to do that because they had insurance to rebuild the store following a natural disaster.

Using the concept of legacy isn't something we've seen much from insurance ads. It's heartwarming without fearmongering and that's why it works so well.

When it comes to generating buzz for your product or service, showing is better than telling.

In 55 seconds, Bluehost delivered a fantastic ad that covered the brand's top features without overwhelming the viewer.

The ad serves as a mini product demo, showcasing how easy it is to use using a fictional website concept. Here's why it works:

9. The General Auto: "The Lunchroom"

For years, The General had commercials that many consumers thought were low-quality. In their 2021 ad, the brand came with a fresh new look.

This ad starts with two men approaching former athlete Shaq in a lunchroom as he eats with a young friend. They reference a previous conversation in which they disagreed with Shaq about The General and refused to sit with him.

They acknowledge that they "misjudged them based on their commercials" then ask for forgiveness, plus a seat at his lunch table.

Now more than ever, consumers crave transparency. This was a great move for the brand because it addressed the elephant in the room.

The General realized their ads were contributing to (or causing) a negative perception of their brand. Instead of quietly rebranding, they took the objection and tackled it head-on, weaving it into their new ad campaigns.

The messaging is clear: Our brand is still trustworthy and credible despite our old ads.

So, if there's a misconception about your brand, don't be afraid to use that in your next campaign.

So, there you have it – the top YouTube ads of the last two years. What they all have in common is a deep understanding of their audience's needs, behaviors, and own perceptions of the brand.