Unriddled: A Long-Awaited Feature Will Arrive at Facebook, an Investment in VR for Business, and More Tech News You Need 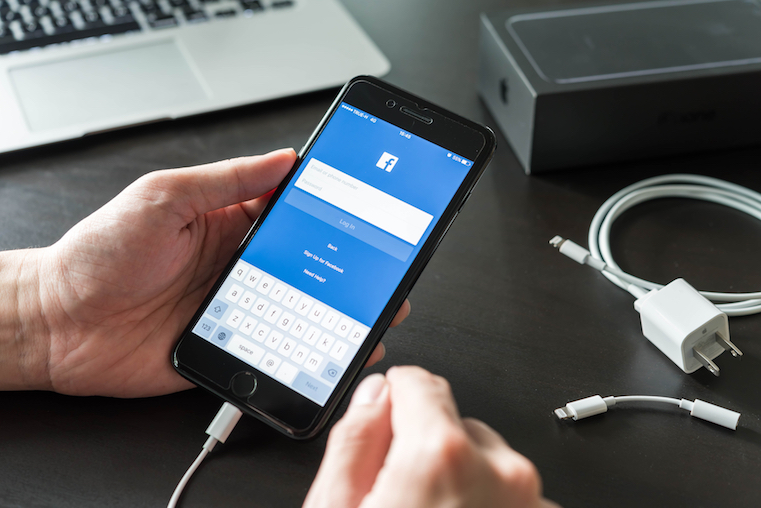 1. Facebook Will Reportedly Launch a Clear History Feature This Year

At its annual F8 developers conference last May, Facebook announced that it would launch a feature allowing users to clear information attached to their accounts about their app and website engagement history -- and delete it.

But at the recent Morgan Stanley Technology, Media & Telecom Conference, Facebook CFO David Wehner said that this feature will, indeed, launch this year -- which was first proposed in response to the company's Cambridge Analytica scandal, in which personal user data was improperly harvested and leveraged by a voter profiling firm.

When (and if) the feature does roll out, users who take advantage of it will have allegedly purged the record of their Facebook browsing history, which includes such behaviors as links or posts they may have clicked, as well as websites they've visited.

Of course, it's this very information that helps advertisers personalize content and promoted posts to users, as it signals what they might be interested in and, therefore, more likely to buy -- which has some arguing that the launch of the clear history feature could have a negative impact on ad targeting. Read full story >>

2. Oculus Is Exploring Enterprise Versions of Its Virtual Reality Headsets

Oculus -- a company that specializes in virtual reality (VR) hardware and apps -- is reportedly exploring options to roll out enterprise editions its Go and Quest headsets.

This potential extension was first suggested by a recent job listing appearing on LinkedIn for an "Oculus Shell" software engineer, which reads that the company is "building an Oculus Go and Oculus Quest Enterprise edition expected to launch in 2019." 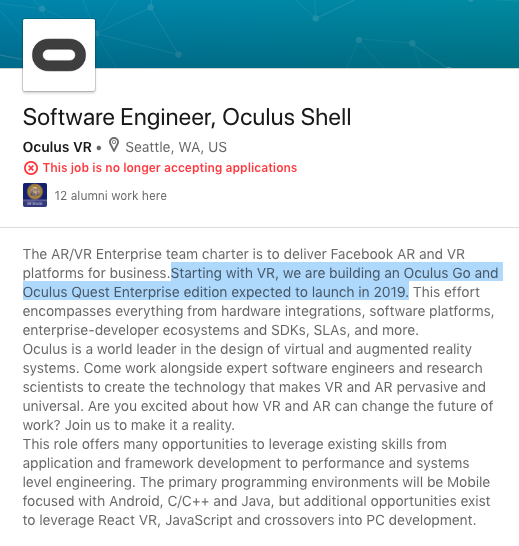 The responsibilities of this role would include "design[ing] and develop[ing] enterprise features into Oculus mobile VR system applications," as well as working on "future-of-work experiences."

The VR use case for business -- especially enterprise -- has been a salient topic over the past several months, especially where it applies to immersive training and education. Microsoft, for instance, recently unveiled a $3,500 mixed reality (MR) headset made exclusively for enterprise. Read full story >>

3. Google Might Still Be Working on a Controversial Project

Now, the same publication reports that plans might still be under way to carry out that project, despite Google CEO Sundar Pichai repeatedly remarking -- albeit, non-committally -- during his December testimony before U.S. lawmakers that the company had no immediate plans to launch in China.

According to the report, a group of internal Google employees have launched a further investigation of their own into these plans, and discovered "a batch of code that is associated with the China search engine."

Project Dragonfly has received a considerable amount of criticism since it was first revealed, including by 88,000 Google employees who protested its launch. Should the censored search engine take form, it would align with policies in China to block websites and search queries pertaining to topics like democracy, human rights, and protest. Read full story >>

4. Amazon Is Launching a Chain of Grocery Stores -- and It's Not Whole Foods

Ecommerce giant Amazon is said to be planning a line of brick-and-mortar grocery stores in a handful of U.S. cities, starting with Los Angeles -- where it will reportedly open its first such store by the end of 2019 -- and expanding to San Francisco, Seattle, Chicago, Washington, D.C., and Philadelphia.

This rumored batch of store openings isn't Amazon's first foray into grocery, nor is it the company's first experience with brick-and-mortar retail. Its cashierless Go stores, for instance, could be described as a hybrid of neighborhood markets and convenience shops -- and in 2017, the company acquired natural foods supermarket chain Whole Foods.

Amazon also offers online grocery ordering and delivery through its Fresh and Prime Now services -- though recent research indicates that this area of ecommerce lags behind other product categories. Read full story >>

Over the past year, Facebook has urged users to log into their accounts using two-factor authentication (2FA):a method of protecting unauthorized account access by sending a code to the user's mobile phone to complete a login.

Now, some users are saying that enrolling in 2FA has caused their phone numbers to become attached to their accounts -- allowing others to discover their profiles just by searching for this information, thus creating a privacy concern. If someone doesn't want to be found on Facebook by a colleague, for example, but that colleague has her phone number, her profile can be found just by using that number as search criteria on the site.

For years Facebook claimed the adding a phone number for 2FA was only for security. Now it can be searched and there's no way to disable that. pic.twitter.com/zpYhuwADMS

The discovery comes after previous revelations that Facebook was also using phone numbers obtained through 2FA for ad targeting purposes. At present, there doesn't appear to be a way for users to opt out of having their profiles discovered by way of a search for the phone number associated with their accounts. Read full story >>

6. A New FTC Task Force Could Be Coming for Tech Monopolies

The Federal Trade Commission announced this week that it will form a task force to monitor the tech industry for anticompetitive activity. But for some, the group's formation raises more questions than it does answer them. Read full story >>

New data suggests that in 2019, over half of U.S. households will have an Amazon Prime membership. Here's a look at where Amazon is this year, and some key items that have shaped its behemoth ecommerce marketplace. Read full story >>

8. You're Probably Using More Artificial Intelligence Than You Think

How many people believe that they use artificial intelligence in day-to-day life -- and where are they using it? Read full story >>

9. The Countdown to SXSW Has Begun. Here Are Our Picks for the Interactive Innovation Awards.

News & Trends by HubSpot is returning to SXSW this year, which kicks off this week. And each year, the hosts the annual Interactive Innovation Awards, to celebrate some of the latest and greatest tech developments from the previous year. Here's a look at our top picks and predictions for four key Awards categories. Read full story >>