The Next Big Thing in Fundraising: Monthly Giving Programs

75% of your new donors will not give next year. 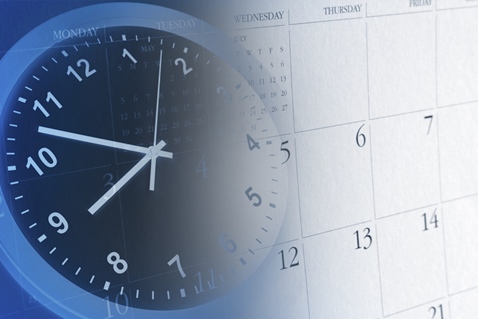 Yes. You heard me correctly. All that effort, time, and money you put into acquiring new donors and 3/4 of them will not come back next year to support your organization again if you’re not engaging them and offering them a reason and easy way to do so.

This is where monthly or recurring giving comes into play. StayClassy pointed out some concrete benefits of a monthly giving program in a recent webinar:

These benefits are really key to long term growth and sustainability for your organization. But what goes into creating a monthly giving program is a different story.

Charity: water launched their monthly giving program Pipeline today, which is "a system of outstanding local partners, innovative technologies and local entrepreneurs all working together to keep water flowing at charity: water projects around the world." I am going to use this program as an example of a well-executed campaign launch and good program design.

There are several important tactics to focus on when developing your monthly giving program. To increase the likelihood of turning your casual donors into recurring donors and eventually, life long fundraisers and major donors, as well as build a recurring revenue model for you organization, consider the following six tactics:

1) Create a hub of information, stories, and recognition for the program.

Creating a destination about your giving program on your website is not only a place to send people to sign up, but also a destination for others to share with their friends and social networks. Providing all the information on one page about the program keeps it simple to find and update.

Charity: water created a homepage for Pipeline with all the information you need to know about the program and an easy way to sign up. It's also beautiful and engaging, with videos and images.

2) Recruit a group of highly engaged individuals before your public launch.

Before you launch your campaign to promote your new monthly giving program, you need a base of supporters to get it off the ground. Recruiting this select group of a few hundred people is important not only to get started, but also to gain feedback from trusted supporters. These people should be your most engaged donors, volunteers, and fundraisers. They will be elated to be in on the secret campaign and will be all about sharing the news once it's public.

Charity: water recruited HubSpot (and myself) to be one of the founding members of Pipeline, sending an email that said "something big is in the works" about a week and a half before the public launch. 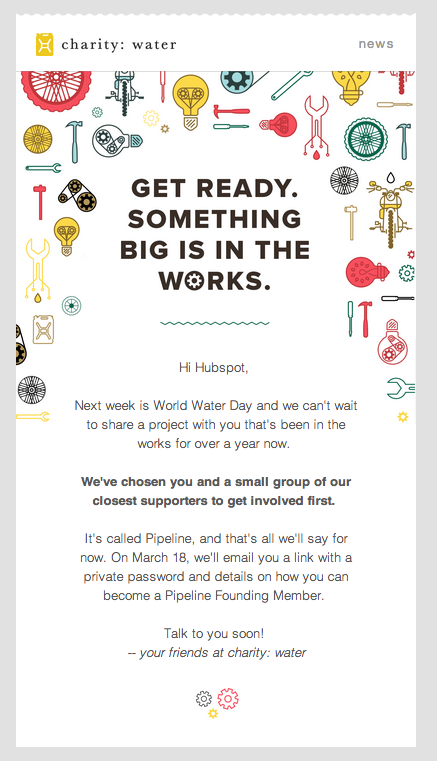 Charity: water also teased the public on social media a few days before the public launch with similar messaging to get followers excited and guessing about the news. 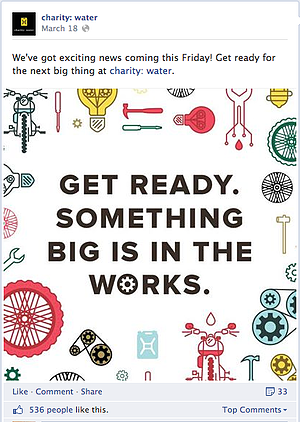 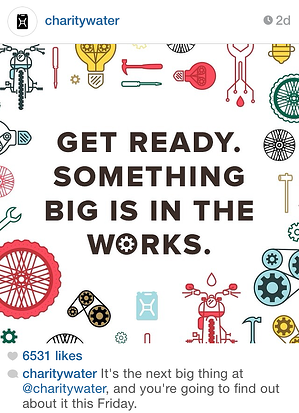 3) Treat these individuals like investors and make them feel special.

Those that join your program prior to the public launch are very much like investors. They are getting it off the ground, and proving that the concept works and is worthy of support. It also gives them the feeling that they are part of your team, helping to achieve your mission.

Limiting access to joining the campaign and deeming those that sign up prior to the public launch as "founders", charity: water took it one step further and created a password-only page for founders to sign up on. The password was emailed to a select group of supporters, who were able to sign up for the program before anyone else. 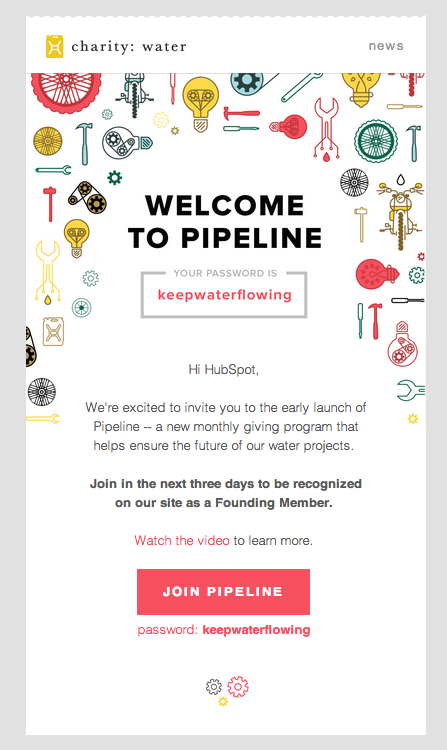 The access to Pipeline was kept private until this afternoon.

Immediately after signing up for Pipeline, my name showed up on the founding members list. It adds a "cool" factor to the process and really makes you feel special to be a part of something new and big. 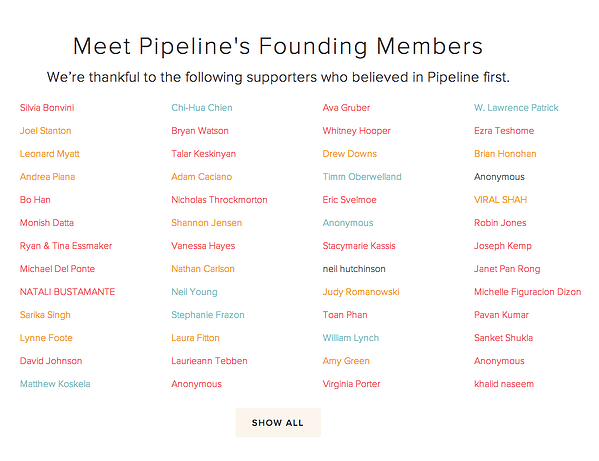 4) Offer a low point of entry.

Asking someone to give to your organization every single month may sound like a big ask. But if you offer a low price point, you're opening up your program to a larger audience, particularly one that is younger and not able to give large amounts. But, if you recruit the right people who have supported you in the past and that want to continue to support you, they will be much more willing to start small and grow over time into lifetime fundraisers and major donors.

Charity: water offers a low barrier of entry at $35 per month ($420 per year), which a majority of their founding partners selected as their initial giving level. If you can have a diversified portfolio of givers at different price points, you'll open your program up to more people of all ages and income levels. The higher giving levels can be more targeted to major donors, corporations, and foundations that may want to give consistently, as well. 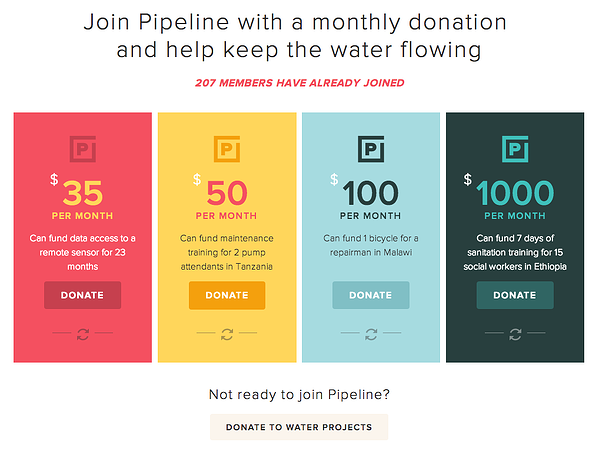 5) Talk about the impact of your program.

Before someone joins your program, they are going to want to know where their money is going and why they should join.

Charity: water created four videos, the first of founder Scott Harrison talking about what Pipeline is and how it works.

This is Pipeline. from charity: water on Vimeo.

Three additional videos feature the workers that are going to benefit from training, the work the Director of Special Programs at charity: water is doing with remote sensors on their wells, and a video of Yellow Thunder -- a drilling rig in action. All these videos are short, engaging, and most importantly, informative. You know exactly what Pipeline does and what your support will do to benefit the program. 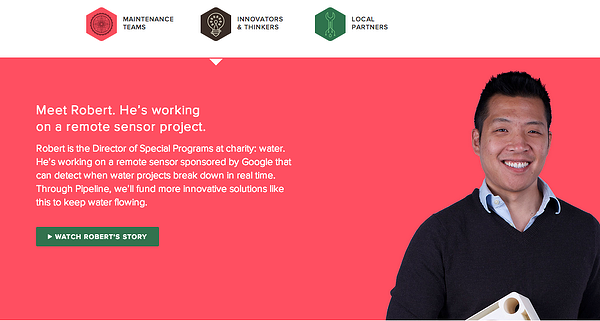 You can also read in detail what your funds will impact in terms of local maintenance and repair programs, innovation for projects and research, and the local partners in each country. 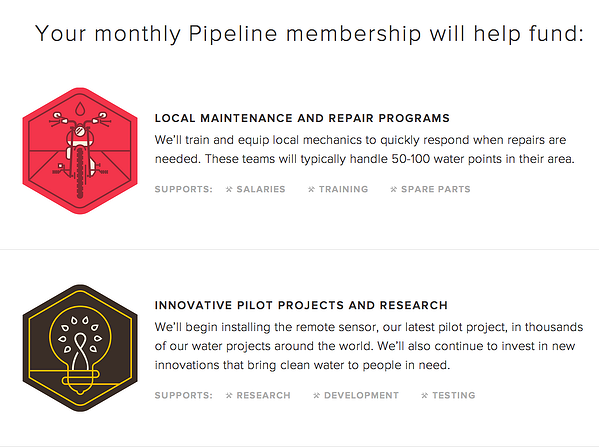 Charity: water sent this email shortly after I signed up for Pipeline: 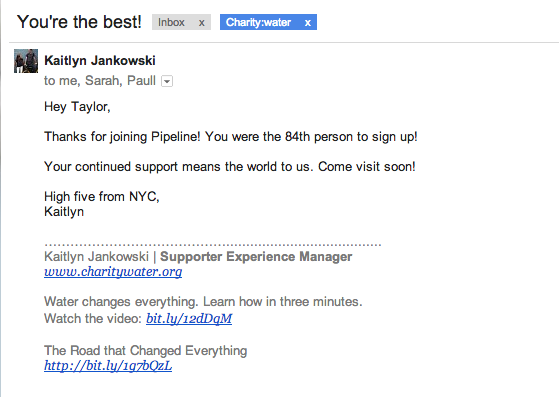 Then, two days after signing up, I received a phone call from a charity: water volunteer thanking me again for joining Pipeline and making sure all my questions were answered. This is very standard for charity: water but not for most organizations. Think about hiring volunteers to create this human element for your program.

(P.S. - Want to hear more about charity: water's evolution? Check out this episode of The Grow Show.)

How does your organization incorporate monthly or recurring giving into your fundraising strategy?