Timeless, Not at All Offensive Snippets From a 1964 Marketing Textbook

Why am I reading a marketing textbook from 1964? Let me explain.

My co-worker Mike Lemire came bounding gleefully to my desk the other day, fresh off a lovely weekend in the sun.

But that's not why he was skipping along so merrily. No no ... it was because he had in his hands a big fat chunk of marketing BS in the form of a 1964 educational textbook, and he was so pumped to share it with me.

What I learned is that some lessons stand the test of time. "The modern concept of marketing recognizes its role as a direct contributor to profits, as well as sales volume." Or, "A company's marketing effort should start and end with the customers." Those still resonate in today's era of inbound marketing. The rest? Well, that's what this blog post is dedicated to. The rest.

May I just say, for shame McGraw Hill. #forshame.

Snippets From a 1964 Marketing Textbook

1) "In simple English, planning is drawing from the past to decide in the present what to do in the future. Or, let's decide now what we're going to do later, when and how we are going to do it, and who will do it. If you don't have a plan, you cannot get anything done -- because you don't know what needs to be done, or how to do it."

On the Service Economy

2) "For a fee, there are now companies that will balance your budget, baby-sit your philodendron, wake you up in the morning, drive you to work, or find you a new home, job, car, wife, clairvoyant, cat feeder, or gypsy violinist. Or perhaps you want to rent a garden tractor? A few cattle? Or maybe some hippies to decorate your next cocktail party?"

Hippies can be recognized above all else by their love of cocktail parties.

Donald Trump will continue to spin his wigs out of cotton candy.

4) "At the other end of the age spectrum are two market segments which should not be overlooked. One is the group of people in their 50s and early 60s. This mature market is large and financially well-off. They are at the peak of their earning power and typically no longer have financial responsibilities for their children."

Until the mature market's adult children come back home to bunk up in 2008.

Crack, however, is still whack.

6) "For people who like to drink but who don't like the taste of whiskey, we now have 'spiked milk' in strawberry, mocha, chocolate mint, and other flavors."

These marketing gurus will also soon corner the market on Bailey's for Babies.

7) "Controversy and emotionalism notwithstanding, there is a black market."

Just because you don't believe in it doesn't mean it's not there.

8) "Even in the face of these changes -- the rising divorce rate, the increasing sexual freedom, women's liberation, etc. -- most experts today still predict that the American family will survive."

You think? Even with the women-folk liberated?

9) "... three sets of social forces ... have significant marketing implications. The first set is our life-styles and social values. Consider just a few of these changes: From a thrift and savings ethic to spending freely and buying on credit. From self-reliance to reliance on government and other external institutions. From the artificial to the natural ("braless" look, Earth shoes, natural foods and cosmetics)."

The braless look and earth shoes, threatening the survival of the American family since 1964.

Because the woman's form is evil, marketers and advertisers have since avoided drawing attention to women's bodies, particularly in the fashion industry.

11) "Can you think of a lower-class person who has middle-class attitudes?" 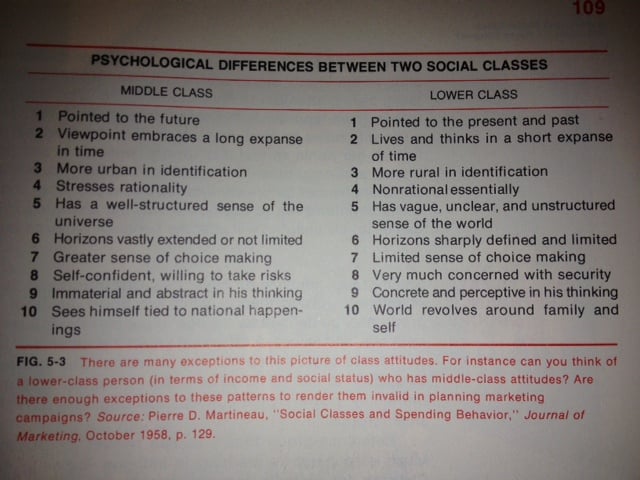 When you add caveats like that, classism is okay.

12) "Beware when bearing gifts in foreign lands -- and watch it when it comes to the color. France: Yellow flowers suggest infidelity. Do not give cutlery. Italy: Red roses are for your favorite woman. Generally you don't give handkerchiefs. Russia: Knives and forks are a friendship-cutter. Taiwan: Knives may wound a friendship. Don't give a clock because the word for "clock" sounds like the one for "terminate." West Germany: If you give cutlery, ask for a coin in payment so you won't cut the friendship."

Enough people must have been giving cutlery as gifts for this to come up.

13) "Signs indicate that European consumers are developing into a mass market. Now let us be sure we understand this situation. A German is still a German, and a Swede is still a Swede."

14) "In France, if you want bread, go to a boulangerie. A charcuterie is okay for meats, but if you want good fish, try a poissonier. But for fresh peaches, you are better off shopping at the fresh fruit and vegetable store (and I forgot the French word for that place)."

Too much translation work. Figure it out yourself.

15) At long last, I found where people learned to speak business babble. 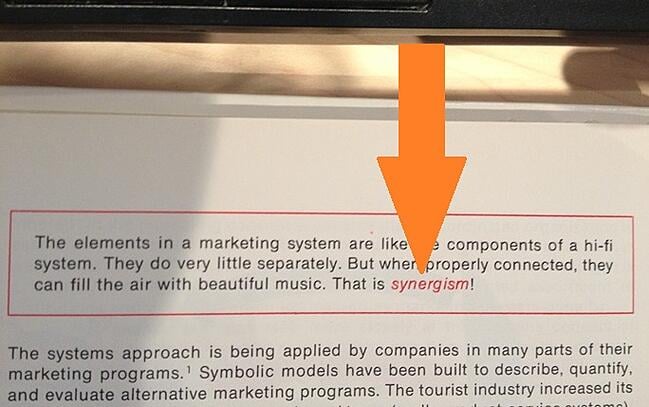