Now It's Your Turn: Who Should Own Your Content? #GreatDebate

The results are in, folks! After a day-long debate, we've finally come to a conclusion about this "who owns your content" debacle. The conclusion? This probably can't be sorted out in four blog posts. ;) By wading through our contributors' arguments and our community's comments, we've made significant steps in a) getting this on people's minds and b) inching closer to possible solutions. 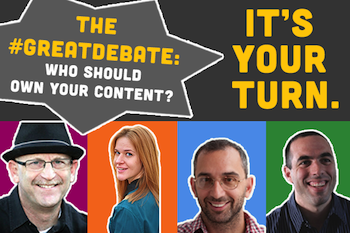 Want to see how the debate shook out? Keep on reading. We compiled the top HubSpot blog comments, some favorite tweets, and even a few blog posts from experts who decided to join in on the fun so you can get caught up on the discussion and make your own decisions.

Pick a Side: A Recap of the Arguments

Watching the debate happen in the blog posts and on social media, people pretty much fell into four camps:

"I can't possibly image that anyone would expect to own something if someone else or a company paid them to create it. If you want to own something create it on your dime. With that said, if your personal brand is so powerful that the paying entity puts significant value on your authorship, then you can and should negotiate the copyright ownership up front in your contract. Of course, if you’re an employee, why would you expect ownership rights to anything you create using company resources? Do you think software engineers should demand ownership from Microsoft for writing the Windows operating system? As the old saying goes, "You only deserve what you negotiate.” If you didn't negotiate for the copyright upfront, there is no debate, unless you think it is appropriate to take something that doesn't belong to you."

Camp #2: Companies own the content -- and that's a good thing.

In a more passionate camp than those in Camp #1, Camp #2 chose to defend companies because writing for a company can help build your personal brand.

On Up and to the Right, a section on HubSpot's Inbound Hub, Beth Stackpole tackles this argument from the perspective of a freelance journalist working with the media. Her take? This debate is nothing new -- it's something we've been dealing with for decades. Check out her post to see what she suggests instead.

Another post supporting this perspective came from our friends at Overgo Studio. It also offers this money quote to further hit home her point:

"Think of it this way. I see nothing wrong with my employer having ownership of my content because I have ownership of all the knowledge I learned from working at that company. Am I going to use that knowledge even after I leave that company? Yes. But I’m not going to claim I learned it all on my own. I’m going to give credit to my past employer and the experiences I had while I was there."

Check out this post from The Weidert Group, which also argued the merits of freelancers allowing companies to own their content so they can bolster their personal brand by offering this perspective.

While most of the folks in this camp are coming from the viewpoint of their company, we had one person agree loud and proud on Twitter:

On the other end of the spectrum, folks were getting heated for the content creator's side. John McTigue took a pretty firm stance using an interesting parallel industry:

Content ownership is obsolete, just like music ownership. Sharing is what you're after as an author. #greatdebate

Sharing isn’t just great for the author -- it’s also great for companies wanting to build their own brands. To argue this point, Chris Handy from Think Handy recorded this video to defend this position:

We also had some people, including my colleague Corey Eridon, weigh in on the ramifications of company ownership, especially when it comes to creating genuine company brands:

The more ownership companies take, the less genuine the creator will be. The content/company suffer most from it. #greatdebate @hubspot

Last but certainly not least were the folks who, well, have no freaking clue. Commenter Eric Wittlake seemed to have said it best:

"The real issue today is no one even knows! Most companies don't have formalized and well-understood agreements with employee content creators about who owns the rights to the content that is created and what licenses are granted to the other party."

Okay, so that's how the arguments all fell out, but most of us would agree that we're missing one huge question: What should you do about it? There were two suggestions:

Payer gets full ownership when content is produced by a ghost writer, but a premium should be paid to remove the writer. #GreatDebate

2) Negotiate a contract to work these issues out before you start creating.

The other solution most often suggested was to make the contract work for you. Jeremiah Owyang urged creators to do their homework:

"Read your employment contracts carefully. Prior, I worked at a company, and all IP created during my employment was owned by them. That also meant my Facebook content. I'm not giving judgement either way on who should own, but I certainly will be mindful when working at a future company on who owns which IP."

And depending on who you are and who you plan to work with, this negotiation process could be easier than you think. Doug Kessler added:

"A pre-nuptial agreement on these issues does feel like the way to go. The nature of the pre-nup will depend on the balance of power. A star blogger may be able to hold out for greater copyright and usage terms than an unknown could negotiate."

Thanks for tuning into the #GreatDebate! These are purely the findings we've found by debating this today, but let's continue the conversation. Where do you stand? Share your thoughts in the Twitter stream or comments below: