15 Funny Out of Office Messages to Inspire Your Own [+ Templates] 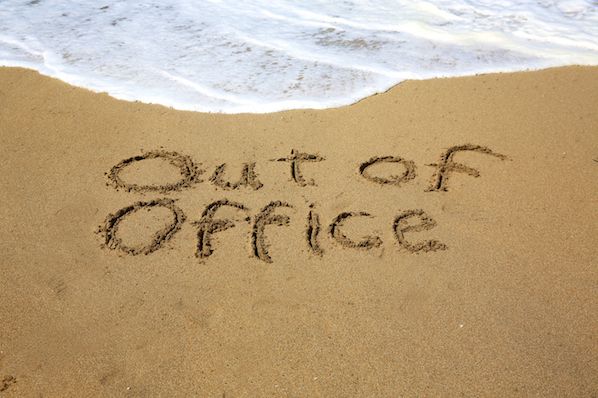 When it comes to the final days before vacation, people tend to fall into one of two camps: 1) those who watch the clock incessantly, and 2) those who are so busy before they leave, they might even forget to put up an out-of-office email message.

If you're anything like I am, you probably fall into team two. That doesn't leave a lot of time to get creative. But if you plan ahead, you might be able to craft some hilarity.

An out-off-office message is an automatic email sent by an email account that is temporarily not being checked by its owner. Every new email to this account will trigger the out-of-office message, which is sent directly to the original email's sender. Most email service providers today allow you to activate this option and customize your message.

Also known as "autoresponder emails," out-of-office (OOO) messages run the gamut. From funny clever, to snarky, we've come across some of the best -- from Google, and from colleagues.

Here are some of the gems we found. But first, grab our full collection of out-of-office email templates below.

Once you're ready to write your own out-of-office email, try our free OOO email generator for some help drafting a message that perfectly captures who you are and where you're going.

We'll give this guy first place since we almost feel bad for him. Almost. Rather than using an out-of-office message for a tropical vacation, he used one to explain his absence during what would likely be a snowstorm. Not only did it give us a chuckle, but it also generated a certain amount of empathy -- which is often the key to good content. 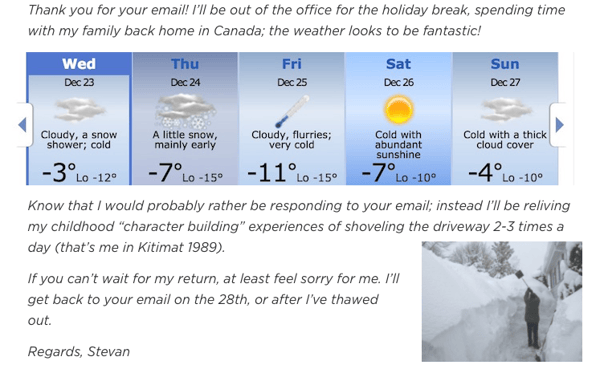 If your email client allows it, you could always just use an image to express your out-office-sentiment, like this one. After all, they say that a picture is worth a thousand words -- and, visual content is still essential to successful marketing.

Are you familiar with the film Field of Dreams? If not, allow us to fill you in. It centers around baseball and a family in Iowa but saying any more might spoil the plotline.

Movie synopses aside, the opening line of this out-of-office message was taken directly from the Field of Dreams script -- fitting, given the sender's travels to Iowa. So before you leave, research some famous quotes about the place you're visiting. It might test the recipient's knowledge, but more likely, it'll just make them smile. 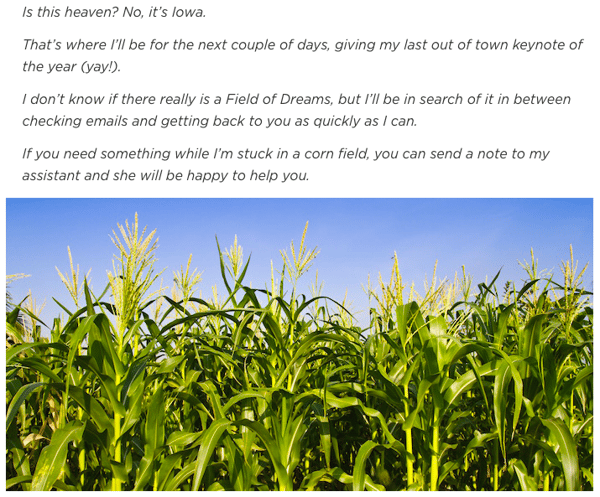 When my colleague Sam Mallikarjunan went on vacation, he set an out-of-office message that was both clever and smart. First, he sent the recipient on an imaginary scavenger hunt to "the highest peak of the tallest mountain." He used humorous absurdity to make it clear that he would not be checking email while he was away.

Plus, he incorporated a delightful technique to let people know that if they really wanted him to read their emails, they should probably send them again after his return. Not only does that keep the sender accountable by saying, "If this is really important, you know when to reach me," but it also helps Mallikarjunan truly vacate his work while he's away. And that's hard to do -- And if you struggle with it, check out these tips.

Josh Kopelman, we salute you.

Not only did Kopelman manage to turn his out-of-office message into an epic poem of sorts, but also, he actually went through the trouble of creating a delightfully snarky, vacation-specific email address for his recipients.

Giving the option to contact an email address containing "" provides two things -- 1) A dose of humor, and 2) discouragement from actually doing what the name suggests. Plus, he prefaces it with a request for empathy, by explaining that he promised quality time to his family.

Here's where honesty is a helpful device. Sure, Kopelman is truthful about the fact that he's on vacation, but he also lets the recipient know that he or she would be interrupting important family time if the first option is chosen. It states a point simply and uses humor to avoid making it sound like he wants the reader to feel guilty. 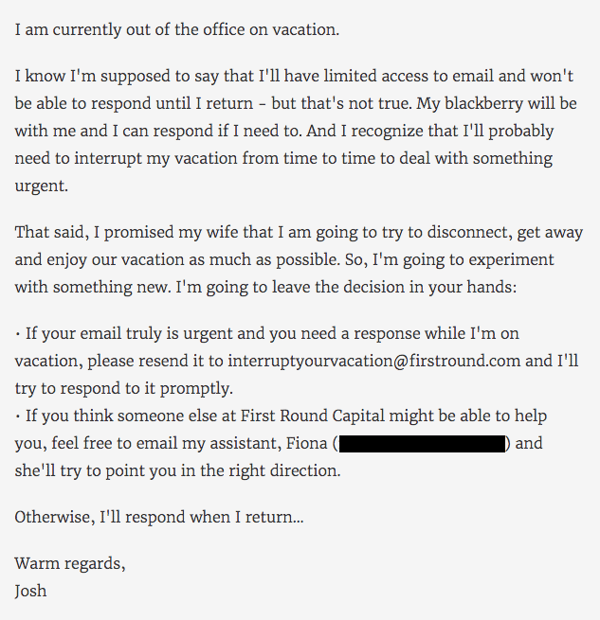 When HubSpot Marketing Manager Karsten Köhler is out of the office, he doesn't mess around. In fact, he's turned his auto-responses into a running series of commentary for fictional cartoon character Troy McClure.

Each time McClure makes an appearance in these out-of-office messages, he "speaks" on behalf of Köhler and alludes to the previous auto-responses in which he starred. It's a mild form of self-deprecating humor -- as if to say, "I know, I'm out of the office again" -- made only funnier by the made-up teaser title included in the last line.

As with the Field of Dreams example, don't be afraid to use a pop cultural reference that audience would recognize. Instead of bemoaning your absence, they'll have something fun and familiar to laugh at.

... and then, there was the out-of-office tweet. We're not entirely sure where it originated, but it has two sides.

If you actually want people to be able to reach you, and you're more likely to be checking Twitter than email while out of the office, it might be an effective way for people to reach you.

But if you tend to use social media during vacation and really do want to be left alone, we would suggest offering a different communication method in your auto-response.

I’m not in the office right now but if it’s important, tweet me using #YOUAREINTERRUPTINGMYVACATION pic.twitter.com/SgL97nof8L

We wish we could find the original source of this one. It's made several lists, and its author is likely a legend within his or her network.

That said, even though we've been preaching honesty as the best policy, be careful with messages that are this transparent. Make sure you're familiar enough with your audience -- and your boss, for that matter -- to know that this sort of out-of-office message will be met with a snicker, and not with concern.

"I am currently out of the office and probably out-of-my-mind drunk. Enjoy your work week."

There's a term that we like to use around here called "snowbirds," which is used to describe those who once resided in the northern part of the U.S., only to flee to warmer parts of the country during the winter.

And although my colleague had mixed feelings about her own parents joining that population in Florida, she couldn't be too upset when her dad suggested flying down from Boston for a Red Sox spring training game.

Naturally, she had to take the day off -- and couldn't let folks know with any old generic auto-response. Instead, she made a guessing game of it in her out-of-office email, below.

Not only can colleges get in on the fun of an OOO message, but they're talking to way more people -- and can use the message as an opportunity to deliver tongue-and-cheek announcements to their students.

Here's an out-of-office tweet by Acadia University, using Canada's Civic Holiday on August 6 to remind students not to get too comfortable this month ...

Acadia Students!! We will be out of the office Monday due to the holiday, but back on campus Tuesday!! We will be in training all day Tuesday and Wednesday though so you may experience a delay in response to your emails! Side note Its almost time for move in day hehe 😏 pic.twitter.com/pLPAavgToT

This holiday out-of-office email is definitely on theme, if not a little passive aggressive. If you're getting emails during the holidays, why not treat everything you receive that season like the present it is, and send a thank-you note?

My snarky colleague sure did in his out-of-office message below. We send thank-you letters in response to holiday gifts, so it's only natural to expect the same gesture in our work inboxes ... 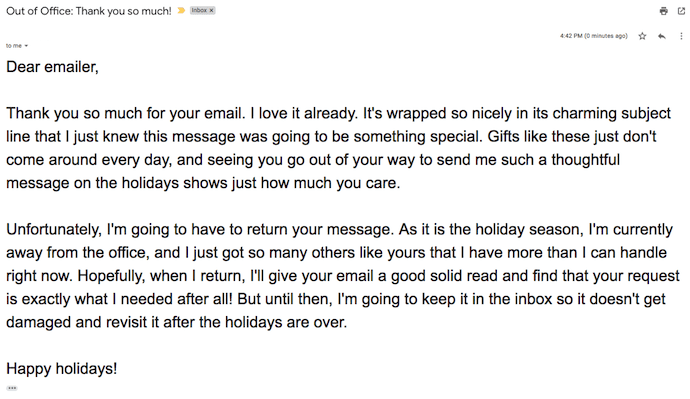 Rachel Smith from Collective Hub stumbled across this message from one of our employees, and it certainly turns the tables on the email sender. Right when you thought you were the one requesting action, the recipient sent back an assignment -- a fun one, at least.

While the sender waits for your response to their email, take the sting out of your absence by involving them in a holiday survey, like the one below. 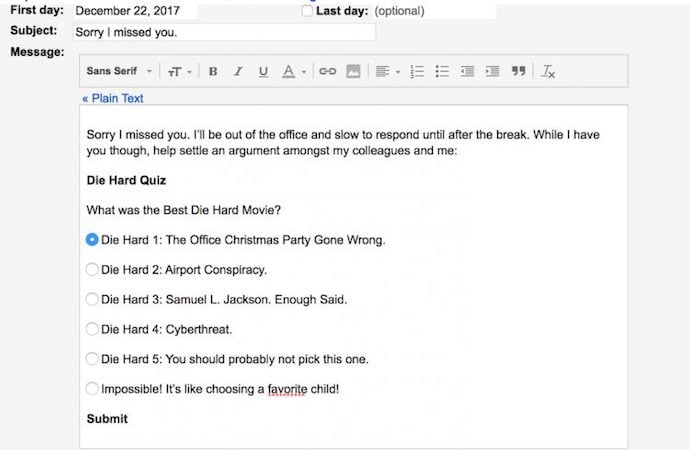 This email comes out of our own collection of out-of-office email templates, which you can get at the end of this blog post. The purpose of this email is to intercept messages during Thanksgiving, and the way in which is does so is, well, with thankfulness.

The funny and charming email template below keeps the confidence of your colleagues with a list of things anyone who works in an office is thankful for. Of course, feel free to customize this list according to the quirks of your own workplace. Thanksgiving is the perfect time to reveal them. 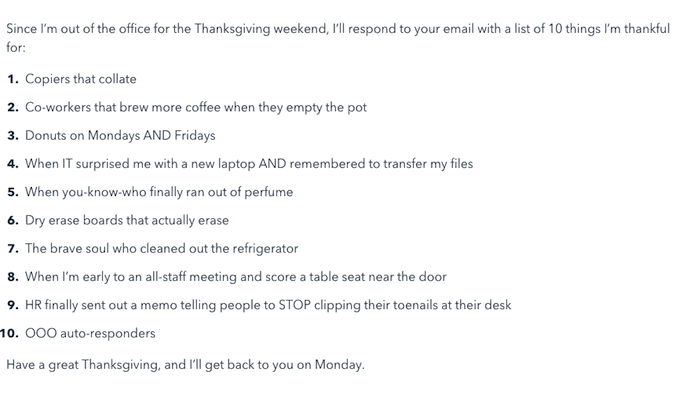 There's no shame in using Christmas to indulge in your childhood movie tastes, but there is shame in not sharing that adorable side of yourself when people are trying to reach you during the holidays.

So, take a lesson from @courtwhip, editor at PEDESTRIAN.TV, who wrote this hilarious out-of-office email, fully stocked with mentions of the best movies from the 1990s. (By the way, "Splinter" is from Teenage Mutant Ninja Turtles, and as we all know, he loves pizza). 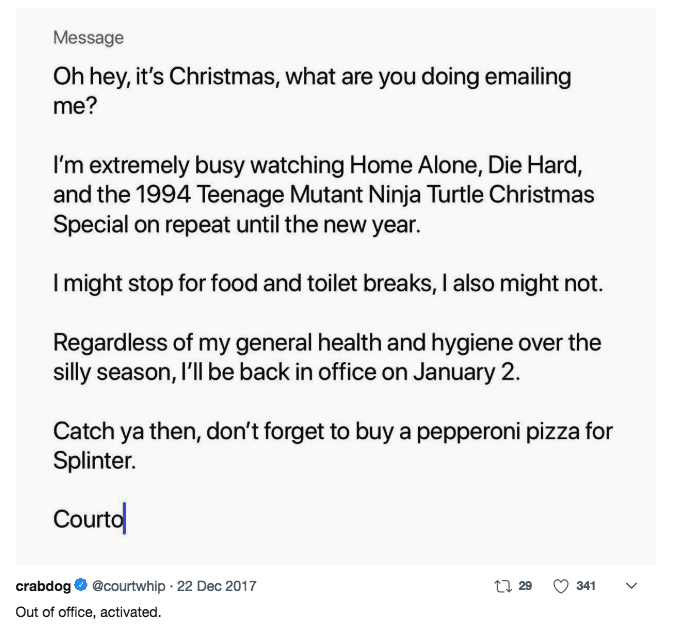 This last out-of-office message is another template available to you within the full collection of fun out-of-office templates at the end of this article. And if it does anything particularly well, it's respect the differing views and opinions of your coworkers -- while amusing so many others.

Your HR department would be proud, or perhaps playfully irritated, at this email's stereotypical impression of your most sensitive coworkers. Read it below.

Are you fully inspired by the creative out-of-office messages above? It's time to write your own -- your upcoming vacation depends on it. Try HubSpot's OOO Email Generator here, and grab your free collection of email templates below.