The History of Happy Hour: Inside the Popular Post-Work Tradition

For many, it's considered the best hour, as it's tied directly to the triumphant feeling you get when you realize that the work day is, in fact, over.

You made it. You earned this. Time to treat yourself to something in a frosty mug ... or better yet, something with one of those colorful little paper umbrellas.

But have you ever stopped to think about how this tradition started? What brave soul pioneered the way for the rest of us to enjoy cheap beer and half-priced chicken wings after a long day of reports and meetings?

I think you'll be surprised to find that the original happy hour bore very little resemblance to the bar stool banter we all know and love. In fact, it actually all started out at sea.

The Origin of Happy Hour

The origin of this term dates back to the early 19th century. During this time, the phrase "happy hour" was used as U.S. Naval slang to describe the entertainment period in which activities such as boxing and wrestling matches would occur on board:

The 'Happy Hour' on board the U.S.S. Arkansas is setting a record for contentment of the crew in the Atlantic fleet now in the harbor. The happy hour is really several hours set apart three nights a week for entertainment of the crew, both officers and men, while the ship is at sea. The entertainment consists of moving pictures, boxing bouts, chorus singing of popular songs and dramatics from vaudeville to tragedy and the tango." (Source)

But it wasn't until the Prohibition era that this term became associated with drinking. In 1920, the 18th Amendment went into effect, prohibiting the manufacture, transportation, and sale of alcohol. This constitutional ban came after a long, persistent campaign from "the Drys," which was the term used to describe the group of people who set out to dramatize the societal evils of alcohol.

And while the movement led to an initial drop in liquor consumption, disobedience was quick to follow.

Renegade drinkers -- also known as "the Wets" -- flocked to speakeasy clubs where they used the term "happy hour" as "a euphemism for drinking sessions ahead of dinner in public restaurants where serving alcohol was illegal."

By 1933, there was no denying the unintended consequences the Prohibition. The "social experiment" cost over $300 million to enforce and resulted in $11 billion in lost tax revenue for the federal government. Not to mention, it eliminated lots of jobs, caused businesses to close their doors, and opened up the floodgates for bootlegging.

As a result of these ramifications, the 21st Amendment was ratified on December 5, 1933, repealing the 18th Amendment and ending the Prohibition era for good. While some states continued to operate under the ban following the ratification, all of them abandoned it by 1966. Moving forward, the decision to regulate the sale and distribution of alcohol would be determined at the local level. (More on this later.)

While the Prohibition played an important role in the development of what we know as happy hour, it wasn't until the 1960s that the term was actually adopted by civilians following an article on military life in The Saturday Event Post in 1959:

Weary of what they describe profanely as that 'damned rat race back home,' they came seeking a place where a man, without neglecting his job, can still find time to fish and swim and putter with his hobbies ... Except for those who spend too much during 'happy hour' at the bar -- and there are a few of these -- the money mounts up fast." (Source)

And by the mid-sixties, restaurants began exploring and experimenting with their version of "happy hour specials." Here are a few of the earliest documented advertisements:

You know how many restaurants and cocktail lounges reduce the price of drinks during what they wont to call 'the Happy Hour,' usually from 4 to 6 p.m.? Well, the Dover House, at the top of Restaurant Row on La Ciegna doesn't reduce prices but increases size. From 4 to 6 p.m., it serves what it calls 'Bird Bath' Martinis and Manhattans in big, 6 oz. glasses ... And it's astonishing the breweries haven't leaped on this." (Source)

"The pre-dinner cocktail has been made even more delightful by gracious hospitality and fine music at Kutcher's Country Club here. The hospitality is evidenced by generous hors d'oeuvres, king-sized drinks and fine music provided by Sonni Rossi, Hal Fields, Bey Perry and the Gullivers Travlelers Go Go Band. The Happy Hour takes place each afternoon from 6:15 p.m. to 7:15 p.m. in the beautify new cocktail lounge adjacent to the Kutsher dining room." (Source)

At this point in time, drinking had not only become an accepted post-work activity, but in some industries (most notably in the advertising world), alcohol consumption also became part of the day-to-day. If you've ever caught an episode of Mad Men, this should come as no surprise. If you haven't, refer to the following clip:

"They were six-ounce martinis made up of six ounces of gin, a drop of vermouth and a thin strip of lemon peel floating on the top, surrounded by a handful of silvery slivers of ice. 'Straight up' was the way most people drank in the 1960s; ordering ''on the rocks'' was seen as a sign of weakness, as was the substitution of vodka. Olives displaced too much gin, and the only people who drank Gibsons were the effete heads of publishing companies."

While business and booze were practically synonymous during this era, it wouldn't last. Happy hour advertisements (see below) persisted through the early 70s, however, day drinking in the workplace fell "victim to sober economic times that demanded clear-headed executives" shortly thereafter. 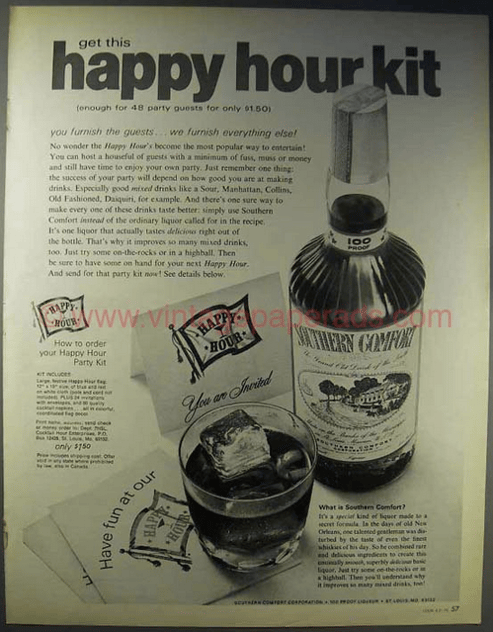 This was the beginning of a dramatic shift in the perception of alcohol in the workplace.

Perhaps it had something to do with Jimmy Carter's infamous "martini attack" during a September 1976 debate with President Gerald Ford. During this debate, Carter "tied the '$50 martini lunch' to Republican tax laws that subsidized the pleasures of the privileged few with the taxes of hard-working folk."

Or perhaps it's because people started smoking marijuana more freely in the 1970s ... but that's an entirely different rabbit hole (which we've covered here).

Either way, drinking in the workplace -- along with drinking in general -- declined during this time. In fact, according to research from Dr. R. Curtis Ellison, a professor of medicine and public health at Boston University School of Medicine, "People drank about a third more back in the '50s and '60s than they did in '70s up to 2004."

And as for post-work happy hours, well, the future wasn't bright.

I know what you're thinking, "What do you mean ban happy hour?"

Allow me to clarify: While there's no law that forbids me -- as a current Massachusetts resident -- from popping the top off a couple bottles post-work, there is a law that disallows the sale of reduced-price alcoholic beverages during a specified time period. That's what they mean by "banning happy hour." And these other states feel the same way about the matter:

While the reasoning behind each ban differs from state to state, Massachusetts pioneered the movement with the hope that eliminating reduced-price drinks would lead to a decline in the number of drunk driving related incidents.

Despite happy hour bans and restrictions, post-work drinking hasn't fizzled out, but rather, it's evolved.

These days, many modern companies and startups are offering up generous office drinking liberties -- from Yelp's headquarters in San Francisco to HubSpot's office here in Cambridge.

This new way of thinking about alcohol's place in the office has allowed for extracurricular drinking to falls both inside and outside the defined parameters of happy hour. With iPad-powered kegs and wine chillers finding their place alongside the water cooler, many teams are moving away from off-site social drinking events and choosing to unwind in the office instead.

But creating a space where your team can share a couple of drinks is about much more than what's in your cup.

Offering up such a privilege demonstrates that you trust your team to make responsible decisions, which helps attract talent looking for a more autonomous work environment and encourages people to take the time to strengthen their relationships with team members.

And for those who don't drink, many companies are serving up some good, clean fun by hosting awesome "alternative happy hour" options.

If you've got a sweet tooth, you would have loved this happy hour bakeoff from Red Antler. Our neighbors over at Wistia also do something different for happy hour: They take advantage of their big screen projector to put on mini-viewing parties. 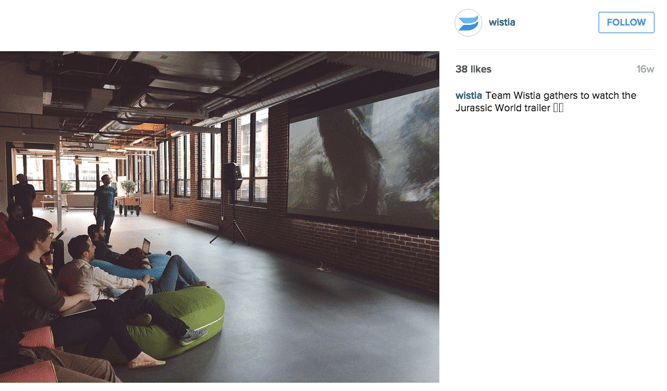 And nothing screams team bonding more than watching your co-workers gracefully (or not so gracefully) take on a mechanical bull, right? Hats off to Cannonball Creative for bringing their team together for this fun outing.

Point being, there's no wrong way to do happy hour. These days, the term means different things to different people in different bars and in different states.

So whether you're indulging in homemade Nutella at a company bakeoff or blowing off some steam at the office watering hole, the important thing is that you're doing something together.

How does your company celebrate happy hour? Let us know in the comments section below.