How Cluttered Is the Advertising Landscape, Really? [Timeline] 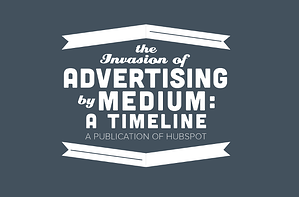 Airplane trays. Parking meters. Bathroom stalls. These are only a few of the unusual nooks and crannies that advertising has ineffably found its way into over the years. We know advertising is everywhere, and we know the media landscape is more cluttered than a house on an episode of Hoarders, but, like, just how bad is it?

Lately I’ve been trying to wrap my head around this very topic: how much advertising are we bombarded with every day, and how did we arrive at a time where our patience and attention spans are more miniscule than milliseconds? Surely it wasn’t always this way, right? 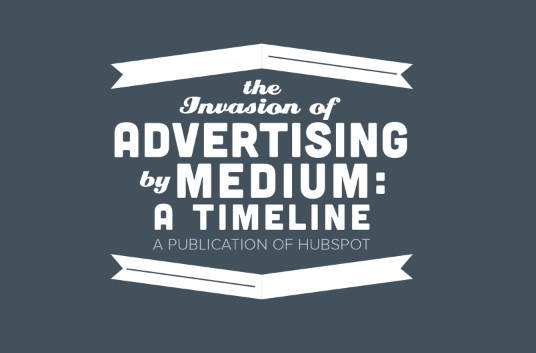 In my recent exploration of the entire evolution of advertising, I found out that way back in 1758 a scholar named Samuel Johnson wrote, “Advertisements are now so numerous that they are very negligently perused.” Advertising was so prevalent then that it was already getting ignored, forcing marketers to bedazzle their newspaper headlines to get an extra blink or two. People have almost always been tired of ads, but it was never as bad as it is today.

Two main reasons why consumers just don't have the time of day for marketing messages anymore: a long history of ridiculously deceptive ads, and a plethora of evolving technologies that allow them to skip past gobbledygook trying to sell the latest gizmo. There's another biggie, though: overbearing information pollution thanks to multiplying digital media.

To gain some perspective on just how much information we're dealing with, I mapped out a timeline of when all the major forms of mass media were infiltrated with advertising over the past several centuries. A couple things became crystal clear. Even before a major communication channel comes of age, it is immediately invaded with advertising. And so much media has proliferated in just the last 22 years that it’s mind-boggling to think about it taking us nearly 400 years to emerge from a print-dominated media landscape, and 48 more years to emerge from period of pre-digital platforms such as TV and radio, to finally arrive at the disproportionately short two-decade span where digital now dominates most advertising budgets. Crazy, huh?

Let’s try to comprehend just how cluttered the media landscape is with a few facts and figures.

The Invasion of Advertising: A Timeline 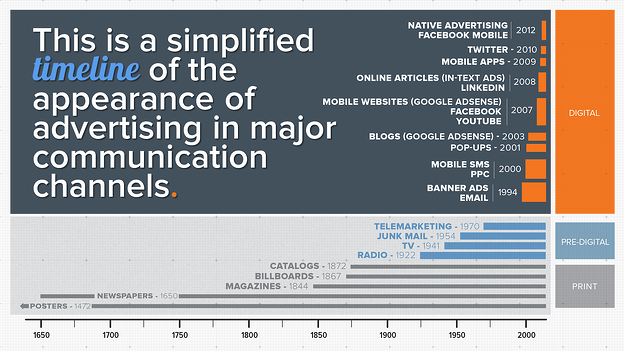 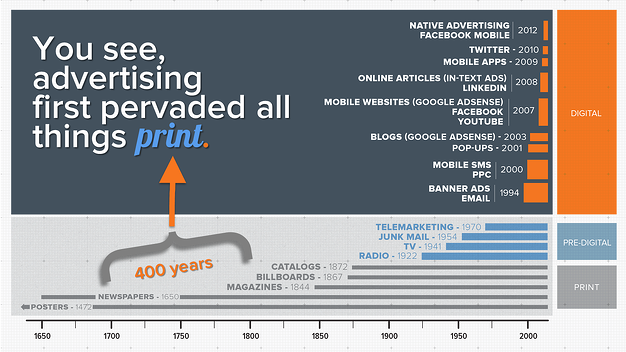 From the moment printing became possible with the invention of the printing press way back in 1440, advertisers began plastering posters on walls and doors within their communities. The first poster ad in English is placed on church doors in London in 1492! Over the next 400 years, ads would find their way into newspapers, magazines, and other print media. 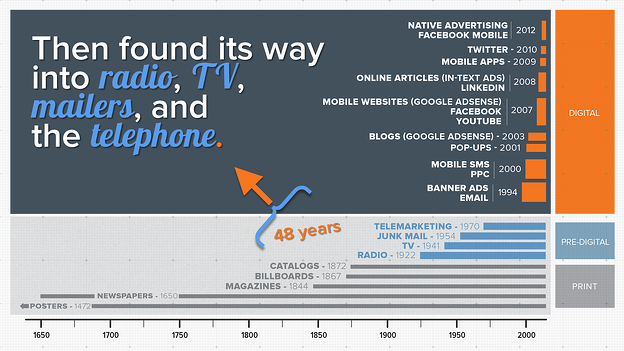 In 1922 and for the next 48 years, the world saw ads invade pre-digital channels such as radio, television, and home telephones. 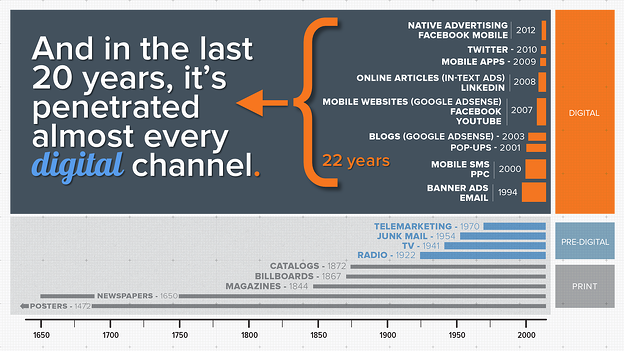 Once 1994 arrived and the internet boomed, websites, blogs, and social media sites cropped up in every corner of the internet and, shortly thereafter, were plastered with ads. Consumers became so hard to reach that social networks and major media publishers started trying to grab reader attention with native advertising.

Putting the Ad Landscape Into Perspective

Not only has the media landscape grown by type; each type has grown exponentially in volume. Nowadays there’s a magazine, TV channel, radio station, and a gajillion websites for every conceivable interest. And when we say “the internet” as an ad platform, that’s more than one trillion pages we’re talkin’ about. That's one thousand billions, which looks like this: 1,000,000,000,000. Now take that number and multiply it by 6, because that's how many display ads (only one type of ad) were shown across the internet in 2012, according to comScore.

When you allocate that across the 2.4 billion internet-connected persons on the planet, it means there are 417 web pages and 2,502 display ads for each! It's simply bonkers to think pumping more interruptive ads into the internet is going to work.

Want some more reasons why? Here, lemme tell you:

Too Much Advertising Leaves Only One Surefire Way to Reach Consumers

When the traditional media landscape consisted of nothing more than a dozen TV channels, radio stations, newspapers, and magazines, advertisers could create one-size-fits-all campaigns. Besides, consumers didn’t know there was a better way, nor did they possess DVRs, Do Not Call lists, or pocket-sized portals to all the world’s information so they could circumvent brand promises that seemed too good to be true.

Nowadays brands don’t find customers. Customers find brands. And it’s not as a result of a cold call that interrupted dinner, a TV commercial that distracted them from Mad Men, or a stack of direct mail stuffed in their mailbox.

Among this splintered landscape and monumental information pollution, customers find brands through searching the web for information when they want it, and by gathering information from a trusted circle of peers both online and off. The only way to impact that behavior is to create marketing people love, and choose to interact with. Marketing that’s more about their needs than the brand’s needs. Marketing that’s trustworthy. Marketing that presents the right information to the right person, at the right time.

Get your own printable timeline and explore how consumers won the war for their attention by downloading our story on The Evolution of Advertising.