The Evolution of HubSpot's Email Marketing Strategy: An Insider's Story

Over the last eight years, lots of things have changed in HubSpot's marketing. When I first joined, we had two marketers; now, we have seventy. We used to have a database of a few thousand; now, it's filled with millions of contacts. And our monthly lead numbers? They used to hover around a few hundred. Now, they're up in the tens of thousands.

As we've grown, our strategies have had to grow with us -- especially on email.

We thought it'd be fun to look back at its changes over the years. Here's the inside story of how our email marketing strategy evolved as our company and database grew.

Our email marketing program truly started a year before we had an email service provider (ESP) or even an email marketer. At this time, many marketers were relying on purchased email lists.

We tried something different. We launched our first free tool, Website Grader (the precursor to Marketing Grader). This tool was something one of our founders had created for himself. He thought it would be interesting for others, so he unleashed it to the world. I say "unleashed" because it really did take off -- over the course of its first year, it garnered thousands of opt-in email addresses. 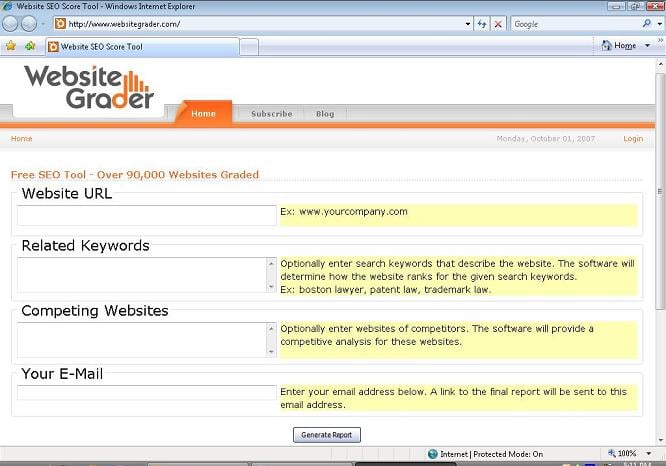 By the time I joined HubSpot and started our email marketing program, we already had thousands of people we could email -- a lot more than you'd expect at any company, let alone a startup no one had heard of.

The early success of HubSpot's lead generation playbook can be attributed to this single asset and opt-in strategy. Later, this strategy was the basis of the official Inbound Marketing Methodology.

From there, our lead gen program -- with email playing a key role -- began.

We created one offer (a webinar on 5 Tips to Turn Your Website Into a Marketing Machine) and promoted it to our entire email list. We were blown away by the response: 400 registrants from one send.

So we did it again the next month, and again the following month. We created one offer per month and sent one mass email to our entire opt-in list every month. Offers, email, and lead gen became synonymous -- so much so that our key monthly metrics included the size of the email list, views of the landing page, webinar registrants, and webinar attendees.

Here's an example of what our reporting looked like. (Note: the numbers are not real.) 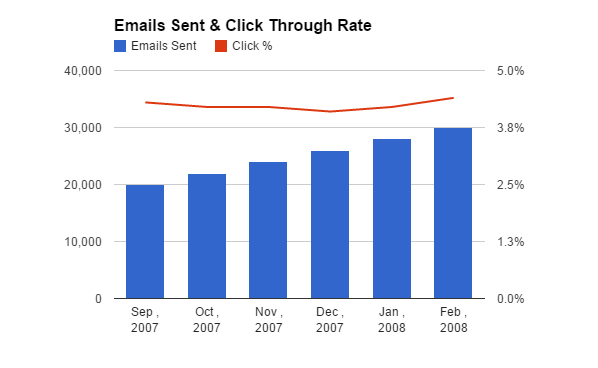 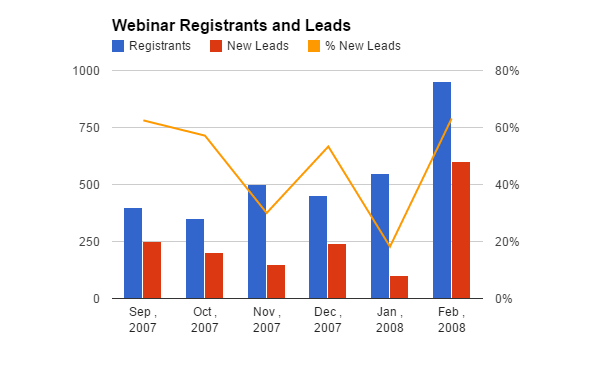 Lesson Learned #2: Lead generation doesn't have to be complex.

This was the first time we saw how email marketing could generate new leads, even when we were only emailing people already in our database.

This didn't seem so strange at first because of how we classified people as leads. People who gave over their email address via Website Grader were not considered leads -- we called them "prospects," and they lived only in our ESP. Once these prospects signed up for a webinar, they became leads for the first time in our marketing database (HubSpot). So we could email that list of prospects and still generate new leads, purely because of our lead classification.

But even as we generated more leads and started promoting new webinars (and later ebooks) to our lists, we saw that email helped us generate new leads -- even if the people on our lists were already leads. We surmised that this was because the content was valuable enough that subscribers would forward emails to others. Email became a key lead gen source for us.

This was also the month that we outgrew our webinar platform of the time. The platform supported up to 1,000 attendees, and for one of our webinars, we let up to 2,000 people register, assuming that only 50% would actually show up.

It was a fail.

More people showed up than we anticipated, so we tried running multiple webinar events at the same time in the same room. That resulted in awful sound issues that just made our attendees even more frustrated and angry. The month after that debacle, we signed up for a bigger scale webinar platform.

Lesson Learned #5: Recognize when something is working and invest in the infrastructure to support it.

In 2009, we started segmenting our database for the first time. Before that, we had still been sending the one mass email a month to our opt-in database (though I had learned not to use the word "blast" in all of the email conferences I attended).

The segmentation was simple and sweet (and even to this day, our segmentation is pretty similar). Here's what it looked like: 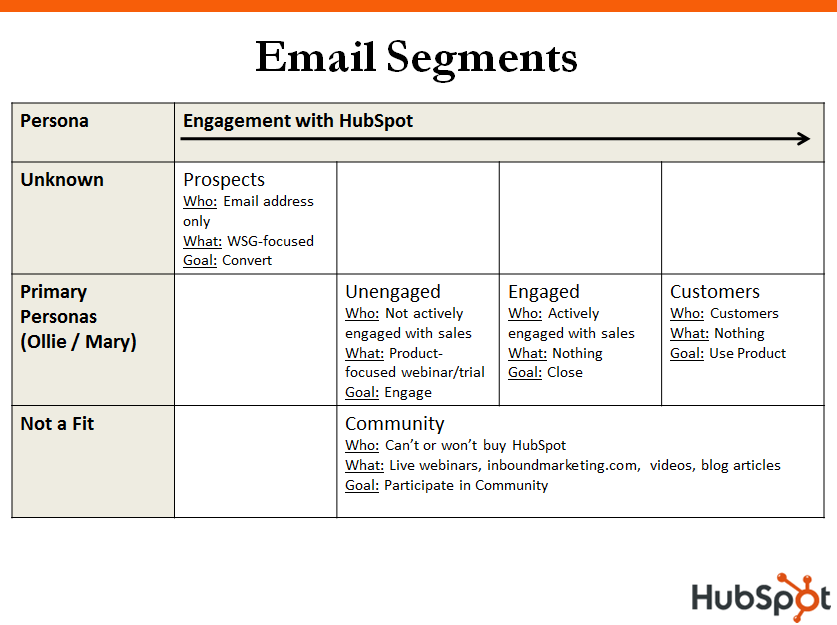 We also launched our first lead nurturing campaigns (drip emails via HubSpot's lead nurturing apps) along with our first middle-of-the-funnel content offers in the form of product-related webinars (e.g. How to Generate Leads with HubSpot). Until then, we had focused completely on top-of-the-funnel offers that could generate new leads, which gave us a substantial number of leads to begin nurturing into customers. Here's what our nurturing looked like: 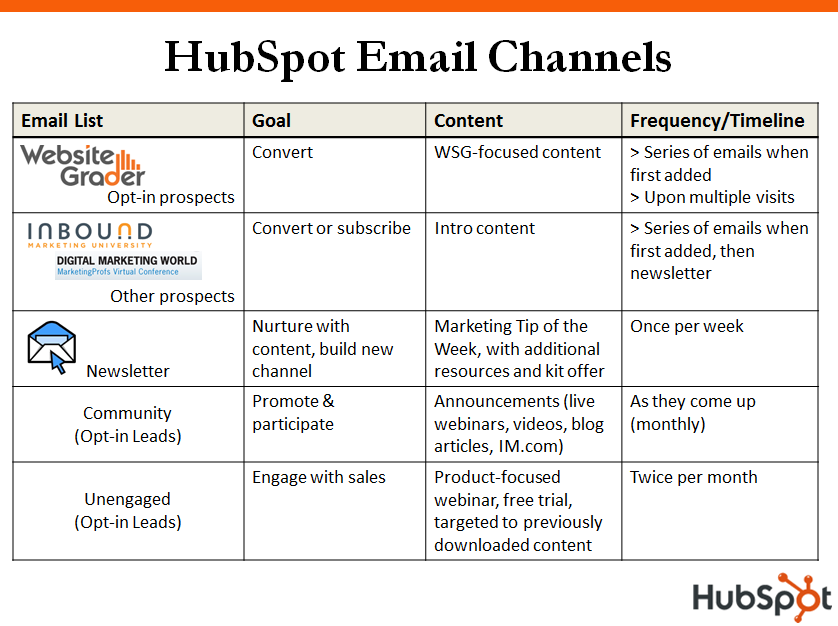 Lesson Learned #6: You need a significant number of leads in order to do segmentation and nurturing right. Focus on filling the top of your funnel first.

This is also the time when we started testing other email formats and content. We launched our first newsletter, tied to Inbound Marketing University (the precursor to HubSpot Inbound Certification). We had only been doing the single-offer-promotion-email for years, and this newsletter style was an interesting test to see if we could build up a separate audience with a different email cadence and format.

After rigorous testing and measuring for a year and half, we decided to close this channel. We recognized that it wasn't yielding the results needed to justify the effort going into it.

Lesson Learned #7: Measure everything and be ruthless about cutting what's not working.

By 2010, we were on to our fifth ESP. We were switching nearly every year due to cost or functionality. I got very good at taking screenshots of our email campaigns, downloading analytics, and exporting/importing all of our lists.

I found that the differences between each tool were minor, but the most recent ESP choice was going to be different for one key reason: Salesforce integration (and thus HubSpot integration). While this functionality did not completely pan out as expected, it reflected a huge pain point: the lack of systems integration led to a ton of manual work, constantly exporting and importing data between databases so that we could do our increasingly sophisticated marketing campaigns.

We did our first revamp of our lead nurturing campaigns around this time, measuring the response rates, updating the content, and changing the calls-to-action to a variety of qualified options -- not just demo requests, but also inbound marketing assessments and case studies.

Lesson Learned #8: When you change lead nurturing campaigns, know what you're trying to achieve and how you're going to measure the effect.

Here you can see the before and after of one of the lead nurturing tracks (focused on social media). 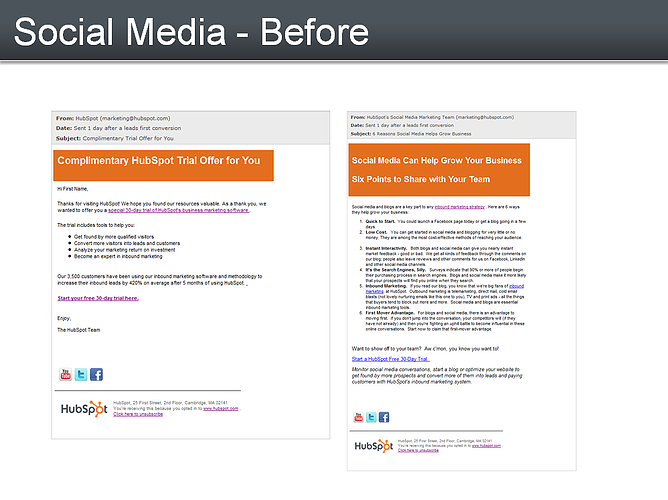 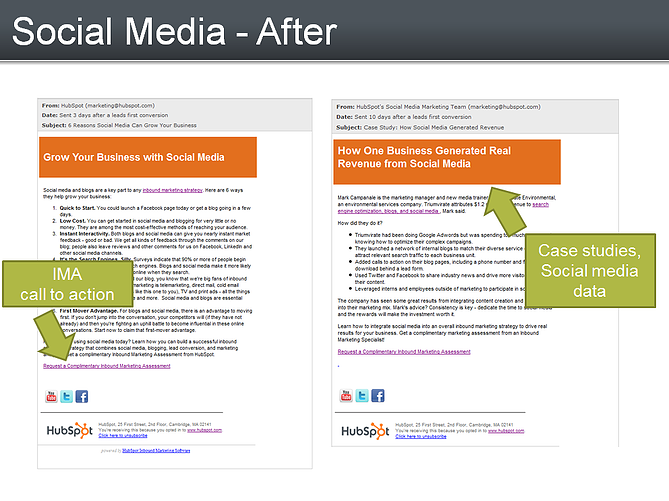 ... which brings me to another lesson.

Lesson Learned #9: Your emails don't need to be beautiful to be effective. (Though thank goodness we ultimately hired some designers.)

Mid-2010 we started doing A/B testing. By then, we were sending about a million emails a month.

The first A/B test was pitting two similar offers against each other for half our email list, then sending the winning offer to the other half the next day. This resulted in doubling our email leads that month and getting us to a new level of lead gen. From then on, we consistently A/B tested each of our email promotions -- even going with drastic tests like changing the offer completely. For more on what we tested, check out these email A/B test ideas. 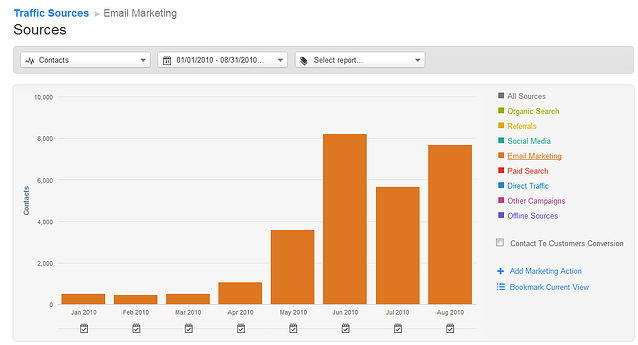 In early 2012, we shifted the team's focus. Until that time, we had been very focused on generating a ton of new, top-of-the-funnel leads, and it was working.

... But we head grumblings from the sales team. And our executives. Grumblings about compromising quality at the expense of quantity of leads.

Turns out, when we set our mind to something, we can hit crazy goals. When we broke all sorts of "wheat bread" records, this is what showed up on our CEO's desk: 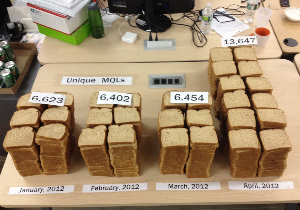 How's that for a live infographic? Marketers -- always creating content.

Lesson Learned #11: Clear goals yield clear results. If you want to drive a new metric, make it a top priority.

This was also around the time that HubSpot launched our own email tools and we made the best and final ESP switch. We exported and imported our lists for the last time and shifted to handling our email marketing efforts completely in-house. The best part for us, the marketing team, was that so much of our experience -- what we had liked, what we hadn't, what we had hacked in our previous tools -- went into some of the product development. The tools we used were very much a reflection of how we actually did marketing.

In the middle of 2012, we did a marketing team reorganization that involved creating new persona-focused roles. We called them "mini CMOs" and those people would be responsible for supporting one of our persona-based sales teams, as we now had multiple. As a result, each segment marketing manager got control over the email list for their segment. Some months, we would coordinate promotions across the team to increase overall lead gen. Some months, we all sent separate, more middle-of-the-funnel emails to support our sales teams.

After a year of this segmented approach, we saw some benefits ... but also some drawbacks. The main benefit: sales and marketing alignment. There was a marketing manager for each sales director, which made communication and prioritization much easier.

One of the drawbacks was we had half a dozen people doing the same thing and yielding lower results. In the process of doing more middle-of-the-funnel email promotions, we had increased MQLs but cut top of the funnel lead gen, which was trickling down the funnel and causing problems.

Lesson Learned #12: Don't focus on the middle of the funnel at the expense of the top of the funnel. After all, if you're not generating new leads, you won't have leads to nurture.

And Lesson Learned #13: All segmentation is not good segmentation. Test every practice to see if it's truly "best" for your business.

After all of these tests, we decided to re-centralize our email marketing efforts. We kept business units separate (Americas Channel vs. Americas Direct vs. EMEA vs. APAC) but centralized the persona segmentation within them. The goal was to get world class at this function by having a single person focus on it full time. We started to see lead gen increase again, while also dramatically cutting down on the amount of time we spent on email marketing.

Lesson Learned #14: Focus builds expertise. If you want to get great at something, have someone focus on it.

All in all, you can see that our email marketing strategy is a living, breathing thing that adapts as the company changes and grows. You can also see that it's not particularly complicated, even today, when we send millions of emails per week. We spend much more time on content creation and experimentation than creating complicated email segments or niche workflows. A simple approach that emphasizes good content and testing is exactly what drives results for us -- even seven years after we were founded.

8 Really Cool Ways to Use Video in Email Marketing

How to Build an Email List from Scratch: 10 Incredibly Effective Strategies