Louis C.K. Just Made the Only Banner Ad I've Clicked This Year

Louis C.K. probably isn't interested in being known for his marketing prowess, but ... he's kind of nailing it. Last year, he made waves by cutting out the ticket brokers and selling tickets to his comedy special on his own website. He did the same when he distributed his special on his own for just $5. His "call-to-action"? Don't steal the content and upload it on torrent sites for free. 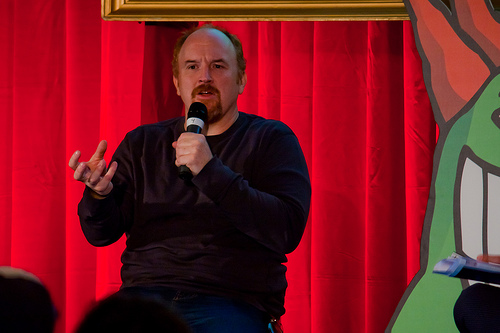 And people were totally on board. He created "content," he put it out there, asked nicely that people pay for the product and not violate the terms of the transaction, and people did it.

It's so simple it sounds ridiculous to celebrate the ingenuity, but I guess simple works. And yet again, he figured out how to play a marketer's game on his own terms using a banner ad, which was spotted by Slate's Forrest Wickman. Check it out: 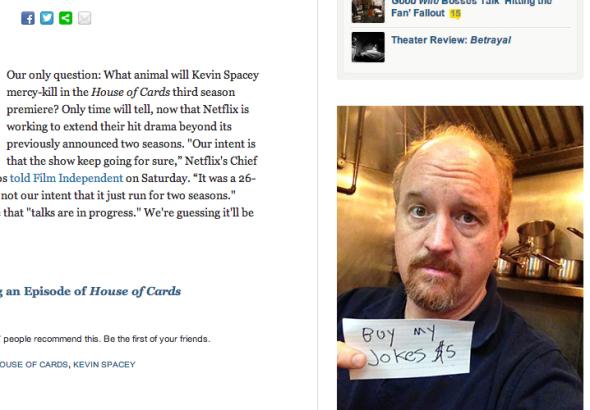 The ad leads to his website, where his latest special is for sale, along with some of his other work.

I'd love to know why he decided to do the ad -- but at face value, the content of the ad is awesome. Because it's kind of the opposite of the banner ads you typically see. It's not "designed'; in fact, I think it qualifies as a selfie. The facial expression is kind of desperate. And the scrawled note is just vague enough to make me want to click through the ad ... although in retrospect, I'm not sure how much clearer it could be. It's just ... really genuine, to-the-point, and totally devoid of marketing-speak; something you don't see a lot of in banner ads.

Anyway, hats off to Louis C.K. The banner ad is widely considered one of the most obnoxious forms of advertising, but it's also just the way of the internet now. They don't surprise me; they don't delight me. They just are. This one, however, is an exception to the rule.