More Sharknado Coming Your Way, and Other Inbound Stories of the Week 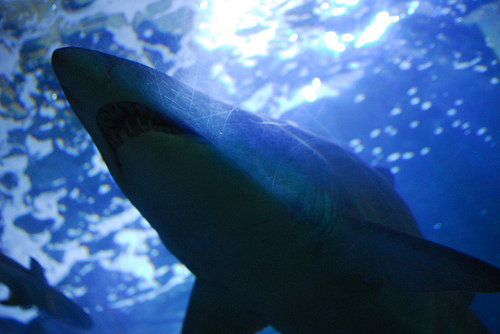 Happy sweltering Sunday, readers! At least it's sweltering here. Holy humidity. I'll remember this feeling when my face is so cold it's hot come January.

Anyhoo, some cuh-razy things happened this week. Some are marketing-related. Others I'm going to find loose marketing tie-ins for, because I think it's important people know these things happened. (Yes, I'm talking about Sharknado.) Let's dive in. (Get it? Dive? Sharks?)

Ooooh, foreboding, right? This week marked the one-year anniversary of Mayer joining Yahoo!, and she's kicking some serious purple pants over there. Stock prices, acquisitions, and morale are all up according to the Washington Post, but the folks over at ReadWrite aren't letting her enjoy it. (As if she's reading any of our commentary, anyway.) They think the brand is still dying, despite these short-term gains. Perhaps its acquisition of mobile ad tech startup Admovate will help it roll out some new ad products that tickle people's fancies.

Sharknado. Did you catch it? Hear about it? If you're out of the loop, well, it's exactly what it sounds like. A movie about a tornado comprised of sharks.

According to the LA Times, the July 11th SyFy premier garnered over 318,000 tweets, with 5,000 tweets per minute being sent during "the height of the frenzy." They also shared that a sequel (or prequel) is scheduled for 2014, but this time the plot will take place in an East Coast city (please be Boston). The SyFy team is wisely capitalizing on the social success of the show (which was arguably more impressive than its viewership, which rang in at a paltry-in-TV-terms 1.37 million) by asking fans to submit their title recommendation for the new movie via Twitter. If you have any ideas, I recommend tweeting them @Syfymovies.

This is the most important tweet you will ever send.

Did you know some people take it way too seriously? According to Marketing Pilgrim, some guy, @MasoneDylan, tweeted that if he got 1,000 retweets, he'd run across the field during an MLB all-star game. He got the retweets, and, well, here's what happened:

Everyone's Clamoring to Get a Piece of the TV Game

Hopping back over to ReadWrite, they report that Google's pitching a new internet TV service to media companies. It's "a so-called over-the-top package that would offer cable-channel bundles over online connections." But they're not the only ones looking to disrupt the way TV works. Apparently Intel is also a competitor in this space, and just earlier this week, we wrote about the rumors that Apple is trying to figure out how to make ad-free TV work.

Hey, if anyone lets me trade in my current 200-channel-of-which-I-only-ever-watch-3-channels-package, I'm on board.

We all know that Pope Francis has a Twitter account, which is pretty cool (I think that's the right word) in and of itself. But according to The Guardian, the Vatican is also offering time off purgatory if you follow Pope Francis on Twitter. This may sound funny to some, but it's actually one way to democratize a sacred Catholic tradition of "indulgences," which reduce the time Catholics believe they must spent in Purgatory after they have confessed and been absolved of their sins.

In short, not everyone can fly around the world to receive these indulgences, so enablement through 21st century communication methods is one other way to receive them. The Vatican has also set up an app, a Facebook Page, and has plans to set up a Pinterest account, too.

You know when your favorite brand posts a new ebook to their page and you're like, ughhhh the only appropriate response would be a selfie, but then you take the selfie and try to leave it as a comment, and you can't?

That's all over now. You can now leave photos as comments on brand pages. Boom. Awesome.

We've had some fun on this blog making fun of bad stock photography. The folks over at Quartz took it to the next level, diving in to how exactly an awkward stock photo is born. It's a really well done piece, and takes the photographer's point of view. It's worth a read.

Craving additional commentary? Check out what HubSpot's Content Team Manager Jay Acunzo (@jay_zo) and Inbound Marketing Evangelist Laura Fitton (@Pistachio) have to say about some of this week's inbound highlights in the video below (plus some bonus Twitter tips!):

What did I miss from this week? Share the other cool stories in the comments!