Why Every Public Speaker Should be Using Messenger Bots 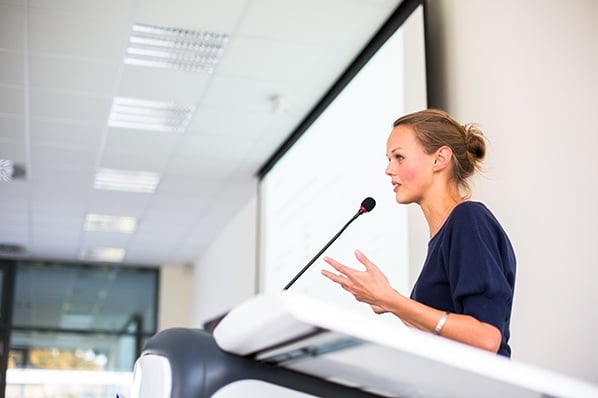 A few weeks ago, I gave a talk at the Multifamily Social Media Summit in Napa, CA. It was my second consecutive year attending the event, and I wanted to give the audience something fresh  --  my talk was going to be about Facebook Messenger.

A few days before the talk, a member of the HubSpot Academy team asked me if I would be using Messenger to educate the audience on Messenger (very meta -- I know).

I surprisingly hadn’t thought much about it, but since our Academy team is full of smart people who know a thing or two about teaching, I decided they were probably onto something.

So, on the six hour plane ride from Boston to San Francisco, I built a Messenger bot to use during my presentation

Setting Goals: Why Do I Need a Bot During My Presentation?

I started by setting a few goals to ensure my bot would truly serve the objectives of my presentation. Here's the list of things I decided my bot needed to accomplish:

Once I had the goals and function of the bot firmly established,  it was time to build.

Creating and Unleashing the Bot

The first thing I did was build a temporary Facebook page to connect Messenger for the event.

Then, I developed a custom QR code with the event logo for audience members to enter the bot experience.

This is no longer active, FYI.

This QR code was tied to a sequence designed specifically to accomplish my goals for the event.

The first message in the sequence welcomed users into the bot and allowed me to understand the audience’s familiarity with the subject before my presentation.

This gave me a good idea of how I'd need to adapt my presentation to meet my audience's expertise level and expectations.

About 20 minutes into my talk, I sent another quick message asking for audience questions. Instead of waiting for a prompt at the end of the session when time was running short, the bot enabled audience members to ask questions without needing the floor. It also helped me plan the rest of my talk accordingly.

Once the talk ended, it was time for NPS. I set the bot up to send this 20 minutes after my scheduled talk.  The results were great:

Two days after the event ended, I sent the slides to everyone who opted in to my Messenger bot.

And finally, for some icing on the cake, I set up a persistent menu that would allow the audience to connect with me on Twitter and Medium. Oh, I also linked them to get a free HubSpot CRM, too.

Did People Actually Use the Bot?

The results of this mini experiment were great. Here are some quick hits:

As you can see, the numbers really speak for themselves.

If you’re a public speaker, I honestly cannot imagine a reason not to be using Messenger before, during, and after your talks -- even if you aren't discussing Messenger.

The potential of the channel is unmatched. And, if you’re a speaker talking about Messenger, you can’t afford to miss this opportunity!