7 of the Best Situational Interview Questions

Qualify marketing candidates faster with the help of this 100 question interview guide. 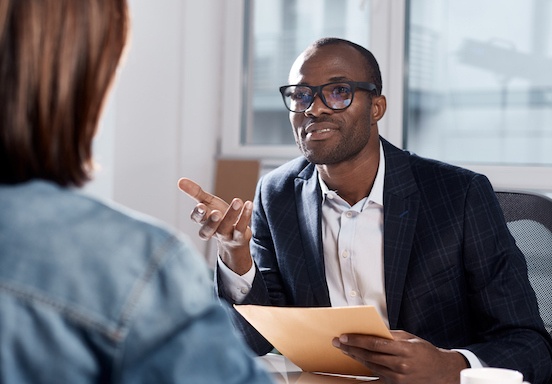 In an interview, let’s say I asked you, “Tell me about a time you worked through a conflict with a coworker?”

You’d probably think about a past experience, consider the lessons you learned from it, and articulate what happened and how it felt. You’d likely mention any shortcomings you had, how you’ve grown, and how you’d deal with conflict with coworkers in the future.

But let’s say I asked you a slightly different version of that question instead: “How would you handle it if you were assigned a project with a coworker, and you two had differing opinions on how to proceed?”

That changes the game a bit. To answer, you could no longer rely on any fairly familiar story about yourself.

Instead, you must use your problem-solving skills and your sense of self to answer how you’d hypothetically deal with a conflict that could arise in the future, without the advantage of hindsight. And, you’d need to think on your feet.

We previously covered behavioral interview questions like the STAR method, which asks candidates to articulate past experiences and what they learned. It’s important to use behavioral questions in an interview, but there’s another method you should integrate, as well.

Situational interview questions are largely hypothetical and can be intentionally ambiguous, such as, “How would you handle X if you … ?” or “What would you do if … ?”

Situational questions give you the opportunity to evaluate your candidate’s quick-thinking skills, while seeing how she responds to curveballs, which is critical information when deciding whether she’s qualified for the role.

Here are seven situational questions you can use when interviewing a candidate, and what you should look for in the applicant’s answer.

1. How would you handle it if your team resisted a new idea you introduced?

What to look for in a good response: You’ll want a candidate to express her respect and awareness of her team’s opinions and thoughts, while also demonstrating an ability to implement initially unpopular ideas.

Ideally, the applicant would say something like this: “First, I’d work on understanding the reasoning behind my team’s resistance. Perhaps it’s because they aren’t familiar with a new system I want to put in place, and many of them are comfortable with the old way of doing things. Once I understood their point of view, I’d put together either a presentation, or a training, to show my team why my idea is a good one. I’d do this while being cognizant of their hesitation, and incorporating their doubts into my presentation. I’d also allow my team to offer anonymous feedback, so each employee felt his or her opinions could be incorporated into the new system -- I’d never want it to seem like my idea was the only way. Hopefully, research or training sessions could help my team come around to the idea.”

In this case, the candidate approached the situation from a place of compassion and understanding, rather than frustration. Instead of dwelling on her team’s resistance, she wisely found appropriate ways to introduce the idea to counteract her team’s doubts. She showed that she is able to problem-solve well, even when her own ideas or reputation are at stake, and even under pressure from her team.

2. How would you handle it if your employee wasn’t meeting your expectations, or was performing below average?

What to look for in a good response: If you’re looking to fill a leadership position, you’ll need a candidate who can handle tough conversations with employees. You’ll want your candidate to express honesty and transparency with each employee, while recognizing the importance of constructive feedback.

Ideally, you’ll want the applicant to say something like this: “I’ve had this happen before, and it’s never an easy conversation. However, it’s important to provide feedback to my employees and remain transparent with them when I think they aren’t performing as well as they could. That’s my job as their manager. I’d start out with something positive about their performance, to let them know I recognize their good behavior. Then I’d point out where they’re falling short, and ask them why they think that is -- most of the time, the employee is already aware of her shortcomings. Finally, I’d suggest ways to improve, to show the employee I want to be a resource to help them grow.”

With this answer, your candidate has shown a level of maturity when delivering tough feedback. You’ll want your applicant to mention the importance of feedback, and you’ll also want her to show good communication skills when dealing with issues with her employees.

3. What would you do if you were assigned to work closely with a colleague on a project, but you two just couldn’t seem to see eye-to-eye?

What to look for in a good response: This question looks for a candidate who aims to understand her colleague’s point of view. You’ll want your applicant to demonstrate flexibility and an ability to compromise. Plus, it’s simply important to get a sense for how the candidate handles conflict.

Ideally, your candidate could say something like this: “Another project manager and I were assigned a project together. I quickly saw my colleague handled follow-up and communication with the client differently than I did. I like to follow-up often and chat on the phone at various stages of the process with the client, but my colleague didn’t see the purpose in communicating with the client so frequently. Eventually, I talked with my coworker about her follow-up style versus mine. We compromised and agreed to follow up with the client every two weeks, rather than every week, to make collaboration smoother. I was glad I approached the situation head-on, and also understood and appreciated that my colleague had a different work approach.”

Undoubtedly, any applicant you interview will eventually collaborate with someone who works differently. You’ll want a candidate to show she isn’t emotional or defensive when she runs into conflict, but rather, she approaches it from a business-perspective and communicates problems when they arise.

4. What would you do if you were working hard on a project and were almost finished when the goals or priorities were changed?

What to look for in a good response: A good answer to this question depends on the role you’re looking to fill.

First, your candidate might show flexibility by mentioning she would stay up late, adjust her priorities, and manage to finish the project the way it needed to be finished. If the position for which you’re hiring is junior level or requires someone to be adaptable to unpredictable deadlines or expectations, you’ll want your applicant to show a level of flexibility.

However, if the role is more senior or if it makes more sense for the position, you might want an applicant to show she can put her foot down. Perhaps you want to see her use more problem-solving skills to analyze those priorities and decisions, and figure out ways to hit those goals without redoing the entire project.

5. How would you handle an instance of receiving criticism from a superior?

What to look for in a good response: This question enables you to assess your candidate’s ability to learn, grow, and accept mistakes. You want a candidate who uses feedback to make changes, while demonstrating emotional maturity.

For instance, your applicant could say something like this: “In my last position, I often met with clients face-to-face, and I greatly enjoyed it. However, occasionally they’d call me over the phone, and in an effort to appear adaptable, I’d always speak with them immediately. My manager heard a few of those phone calls, and he eventually told me that I sounded short on the phone, and worse, I often wasn’t as prepared as I could be, because I’d been in the middle of another assignment and was caught off guard. He was completely right -- I’d never considered that I could simply tell the client I’d call them back, or let the call go to voicemail. In an effort to multitask efficiently, I was actually letting my client relationships suffer. I learned from that feedback and, going forward, felt confident telling the client they’d need to set up an appointment with me even if they wanted to talk over the phone.”

Here, the candidate demonstrates she’s open to hearing feedback, appreciates it, and uses it to fuel her growth. She owned up to her mistake but didn’t dwell on it, and demonstrated an ability to adjust her own work style in response to that feedback, rather than becoming defensive or accepting the feedback but not changing her behavior.

6. What would you do if you were almost finished with a project on a tight deadline, when you realize you’d made a mistake back in the beginning that required you to start over?

What to look for in a good response: No one is perfect, and it’s good if your candidate can admit to a situation where she made a mistake that required a re-do of a project. More importantly, you’ll want an applicant who can be honest with supervisors about her mistake, rather than trying to cover it up.

You want to hire someone who looks at mistakes as opportunities to learn, rather than as embarrassing failures.

Ideally, your candidate would say something like this: “First, I’d investigate the problem and the source, and make a list of a few different solutions. If none of those solutions were possible without fully redoing the project, and if I thought the mistake might make me miss my deadline, I’d immediately approach my supervisor and let her know the situation. Particularly if the mistake is my fault, it’s important I’m honest and open about it -- it’s a good learning and growth opportunity for me, and could prevent others from making that same mistake. Finally, I’d put in extra time if necessary to finish the project.”

In this example, your applicant displayed honesty, a commitment to her job and making things right, and an openness to learning from mistakes.

7. How would you handle it if you were unsatisfied by an aspect of your job?

What to look for in a good response: It’s not practical or necessary to look for a candidate who loves all aspects of her job equally. Instead, you want a candidate who demonstrates a good level of professional maturity, understands some tasks are less enjoyable than others, and appreciates the necessity of those tasks for the company’s bottom line.

For instance, you’d want your applicant to say something like this: “I love working with people, which is why I pursued a management position, but I don’t love the paperwork -- does anyone? Early on, I needed to figure out how to approach stacks of paperwork so it didn’t affect the enjoyment I had for other aspects of my job. First, I took a good look at the content and realized that, while it might not be fun, it was certainly critical for ensuring my team was successful. When I could see it contributed to our department’s goal, I appreciated it more. Then, I set aside one day a week to tackle the paperwork, rather than working on bits each day. Monday morning, first thing, I’d turn off my computer and avoid distractions, and get it done. In a way, this became enjoyable in it’s own way, since it was distraction-free time.”

You want to feel confident your candidate is mature and professional and understands the importance of seemingly mundane tasks. You don’t want an applicant who says she gives projects she doesn’t enjoy to her coworkers or interns. Instead, you want a candidate who has the flexibility to figure out how to make unsatisfying tasks work for her without resenting the position long-term.

The Ultimate Guide to Marketing Interview Questions From HubSpot's CMO