The Rules of Twitter Hashtags: Hits and Misses From 7 Big Brands

Since hashtags became clickable in 2009, brands and consumers have used them to start, track, and follow conversations on Twitter. Today, hashtags have become a critical part of successful marketing campaigns across many different social platforms. They’re so widely used that brands now feature them on advertisements, TV shows, even the big screen at sports games. 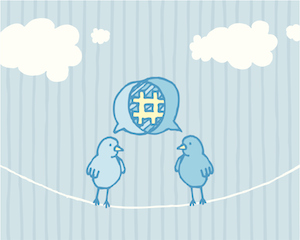 For example, if you’re a fan of The Bachelor, you’ve probably seen the superimposed tweets with the hashtag #TheBachelor on the lower left-hand corner of the screen while the episode is playing. Having a designated hashtag for the show encourages viewers to interact with ABC and other fans of the show on social media.

Executed properly, these campaigns can be very effective in helping brands spread their message to a wide audience. After all, more than 70% of consumers are motivated to explore new content when hashtags are present.

But what about when a campaign isn’t executed well? That stat still holds true, so any hashtag screw-ups can have a big effect on your campaign – just not the effect you want.

To help make sure your campaigns aren’t a flop, we’ve rounded up lessons from seven of the best and worst Twitter hashtags of all time. Check out what happened, how it happened, and what companies can learn from the hashtag successes and failures of these big brands.

Toilet paper company Charmin doesn’t hold back when it comes to using potty language on Twitter. In 2013, they launched the humorous Twitter hashtag #tweetfromtheseat to take advantage of the staggering number of people who use social media in the bathroom (40% of young adults, according to Time – and those are just the ones who admit to it!) Here is an example of what they ended up tweeting: 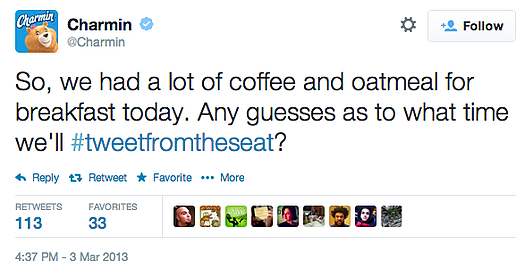 On November 15, 2013, the world fell in love with 5-year-old cancer fighter Miles (aka “BatKid”) as he became a superhero for the day. San Francisco became Gotham City thanks to the Greater Bay Area Make-A-Wish Foundation and the help of 16,000 actors and volunteers. BatKid, dressed in full costume, saved the city from the Riddler and the Penguin while hundreds of thousands of people followed along with the hashtag #SFBatKid on social media.

Here is an example of what people were tweeting:

The story blew up on the Internet, generating an estimated 1.7 billion social impressions. The number of #SFBatKid and #BatKid tweets reached over 545,576 in three days and came from 117 countries. Celebrities like Christian Bale, Ben Affleck, and Britney Spears used the #SFBatKid hashtag. Even President Barack Obama gave Miles a six-second shoutout on Vine.

Finally, Make-A-Wish saw a huge boost in site traffic – as many as 1,400 hits per second on all their sites during the peak of the campaign. 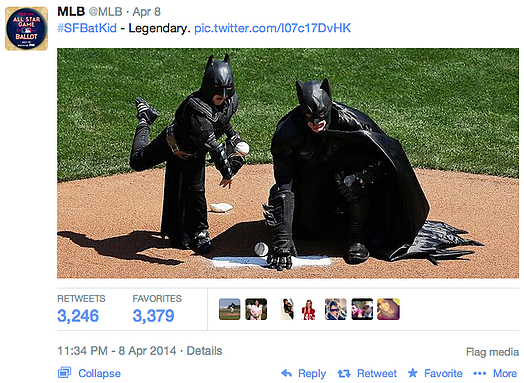 Nope, a drunk intern didn’t take over the @DiGiornoPizza Twitter handle and go nuts with caps lock during the 2013-2014 American football season. In fact, DiGiorno Pizza’s unconventional #DiGiorNOYOUDIDNT campaign was carefully strategized by their agency, Resource.

Resource came up with the hashtag idea in hopes of expanding DiGiorno Pizza’s social media reach to new audiences – specifically, the NFL smack-talkers of the Twitterverse. Their staff then began following and participating in NFL smack talk every Sunday on Twitter using DiGiorno Pizza’s Twitter handle and the hashtag #DiGiorNOYOUDIDNT. Hilarity ensued:

And the people loved it:

Then, during the Super Bowl, DiGiorno Pizza paired their hashtag with the trending #SuperBowl hashtag and it became a viral hit: 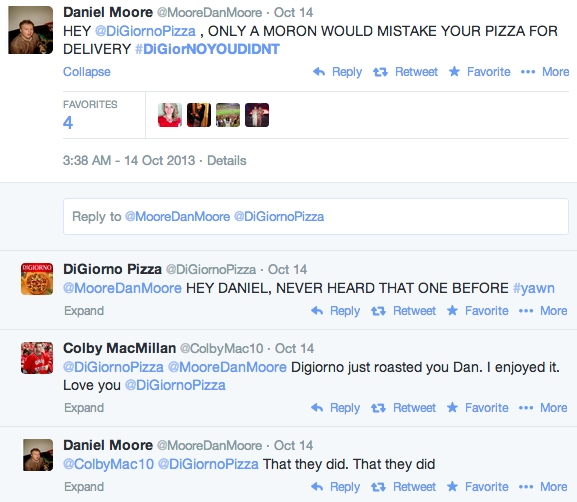 Immediately following the 2014 Super Bowl, Esurance successfully put a modern spin on one of the most popular marketing plays: the sweepstakes. In their TV commercial, which took place right after the Super Bowl ended, The Office star John Krasinski introduced the $1.5 million prize Esurance would given to a single Twitter user who tweeted using the hashtag #EsuranceSave30 during the following 36 hours.

Where did that dollar figure come from? Esurance claims it was 30% of the cost of airing a TV commercial during the Super Bowl, aka the amount the company saved by airing their commercial immediately after the game instead of during it.

Now, onto a few of the not-so-successful Twitter campaigns.

Susan Boyle, the Britain’s Got Talent sensation, drummed up some serious publicity for her album party in 2012 – but not the kind she was hoping for. Susan’s PR team sent one tweet promoting the party using the hashtag #susanalbumparty before they realized it wasn’t a great idea. Do you see the same two words I see? 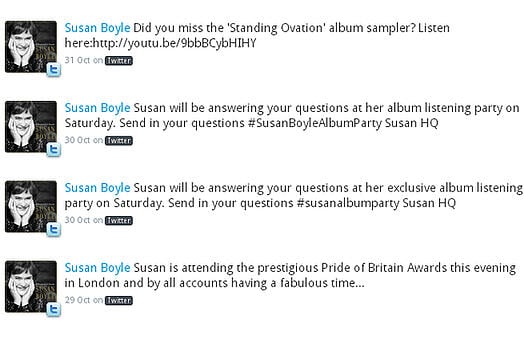 It was quickly deleted and corrected, but Twitter users caught on before they could prevent it from going viral.

Some argue the hashtag was viral genius – after all, it spread like wildfire on Twitter and made the news after just one use. But since Susan’s PR team declined to comment and deleted the tweet, it’s generally believed to have been unintentional.

Before you settle on a hashtag to promote your campaign or event, ask a few trusted peers what they think of it. If just a few more people had checked this hashtag, someone surely would have caught the double entendre.

But what if they had consistently capitalized every letter of each word in the hashtag to make it “#SusanAlbumParty”? While this would have been a quick fix for the original tweet, remember that the goal of a Twitter hashtag is for other people to use it, and many people don’t capitalize letters in hashtags. The public would likely have noticed anyway.

Entenmann’s, known for their baked goods, used the hashtag #notguilty to promote their low-calorie food options – at the same time that #notguilty was already trending in the wake of the controversial Casey Anthony “Not Guilty” murder verdict.

Entenmann pleaded ignorance, and we don’t know for sure whether it was accidental or just a bad joke. They deleted the tweet and apologized on Twitter.

Check out whether people are already using your hashtag before using it. You generally don’t want to use a hashtag people are already talking about for two reasons: the tone of your message could be misinterpreted, as Entenmann’s was, or your campaign could get totally lost in the ongoing conversation.

McDonald’s #McDstories campaign is probably the most widely discussed company hashtag “fail” of all time. In January 2012, McDonald’s sent tweets like the one below, hoping to inspire fans to share their positive experiences at the fast-food chain:

The campaign didn’t go as planned. Tweets of horror stories having to do with McDonald’s food began rolling in almost immediately. People shared 140-character anecdotes about eating the quality food, throwing up after eating, and comparing happy meals to dog food.

Have a plan in case your campaign backfires. You don’t want to get caught off-guard and have no recourse in place. Knowing how you would respond to negative tweets before you start a campaign can save you lots of headache down the road.

Also, make sure that your campaign couldn't ignite lots of negative responses. In the world of social media, you can count on complainers to be the noisiest responders.

These are just a few examples of successful, and not so successful, campaigns from big brands – but the takeaways aren’t only for companies with big budgets. Regardless of the money in your budget or the followers on your Twitter account, you can put these best practices to use in your next Twitter campaign.

What other lessons can we learn from the Twitter hashtags you’ve come across?