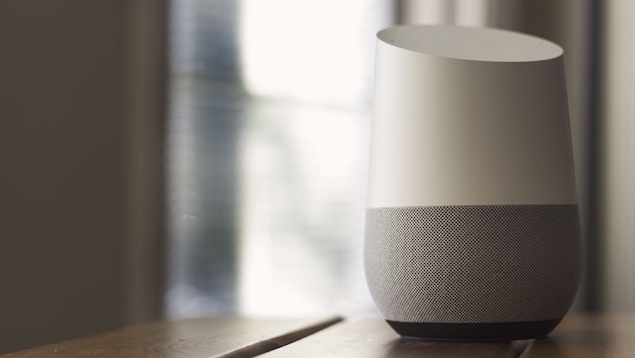 My name is Amanda, and these are the words I use to start my day.

And no later do I utter them, it than a smart home speaker responds with, "Good morning, Amanda," followed by a brief weather report, and tech news briefings from a handful of sources.

For many consumers, there isn't anything about this routine that sounds terribly out of the ordinary. In my workplace alone, many of us kick off the day by fumbling for coffee and mumbling a verbal command for news that, somehow, our respective smart home speakers of choice understand.

But here's the thing: My morning doesn't end there. Throughout the day, I use both Google Home and Amazon Echo simultaneously -- each for different tasks, often in different rooms.

And now, I've added an Apple HomePod to the mix.

I know what you're thinking -- what could one woman ever possibly do with more than one -- let alone three -- smart home speakers?

Think of it this way: I tried using all three at once, so you wouldn't have to.

Here's how that played out.

What Happens When You Use Three Smart Speakers at the Same Time?

It Began With Two

Since the HomePod only became available last week, up until then, I was only using two smart speakers: the Amazon Echo (which I'll refer to throughout this post as Alexa, the name of its built-in digital personal assistant) and the Google Home.

A lot has changed since I wrote last year about the distinctions between Alexa and Google Home. Both devices have evolved with fresh capabilities and features, creating new differentiating factors.

One of the biggest improvements, when it comes to my day-to-day, is the number of Alexa's skills versus those available through Google Home. Alexa's catalog of skills, in fact, has grown into an app store of sorts, with 15,000 available for users to enable.

My personal favorite is My Boxing Coach, which I use at least twice a week. But I don't use it without the help of my Google Home -- and here's why:

Allow me to make one thing clear: Tasking multiple smart speakers with different functionalities to create a full home workout experience is what I'd call a "first world problem," to be sure.

But, when I shared the experience with my colleague, HubSpot Director of Web Development Dmitry Shamis (whose name you might recognize from our previous coverage of the two devices), he told me, "You shouldn't have to."

When Shamis and I were discussing this same topic a year ago, he argued you don't need both devices, because they share enough of the same capabilities to, say, get through an average day. But now, we've both changed our tune.

And while "need" is quite relative when it concerns any tech gadget, it's very easy to use both speakers at once, for different things -- especially when only one of them features something like a workout app. (Google Home, for its part, only lists nearby gyms when I prompt it for a good workout.)

My recent conversations with Shamis got me thinking about the idea of an ecosystem, and the way a series of branded products are often built to work only with each other. That was an issue at this year's CES, where several Samsung and LG products were designed this way -- under a branded ecosystem.

Between Alexa and Google Home, the latter seems to have a better foundation resembling an ecosystem. Google has its own phone, a suite of communication applications, calendar, and a music service. But its smart speaker is still designed to integrate with services from other brands, like Spotify.

Alexa is a bit further behind when it comes to an ecosystem. Though the Echo does have features like its own music service, and it allows users to make Amazon purchases through the speaker, the strategy of its parent company focuses more on moving into and taking the lead in major industries (think: online retail, grocery shopping, and more recently, healthcare and shipping).

So, why do you have to use both to have background music for your workout? It's not like Google is a stranger to an app store. After all, it has its own catalog of Android applications on Google Play. Why leave that part out -- as well as the ability to combine skills simultaneously?

And Then Came the HomePod

When it comes to a branded ecosystem, it's easy to think of Apple. And while it was a bit late to the smart speaker party, we can't deny that it was an early market leader in so many of the other things behind these devices: smart mobile devices, a digital personal assistant, voice search capabilities, and a portfolio of products that all look, feel, and sound alike.

Adding a smart speaker to the portfolio not only made but almost seemed like a latent move for Apple.

"Apple is kind of amazing at turning all its products into an ecosystem," says Kevin Raheja, HubSpot's Director of Strategic Partnerships. "A really sticky ecosystem."

It's a point that became particularly relevant when I began using my own and learned that if I want to play music on it, I have to do so through Apple Music -- no Spotify, no Pandora, no integration with any other streaming service:

What gives -- and what is Apple's end game with this kind of restriction?

Is Apple that confident in its base of brand loyalists that it can successfully and fully eliminate all other music services from its smart home device especially when one of its top selling points is its superior sound quality?

To underscore that answer, he reminded me that Apple Music already has more user accounts than Spotify's domestic user base, allowing it an early advantage as it enters the smart speaker market. It's also important to consider the likelihood that a user would purchase a HomePod because she already uses other Apple devices and services, like an iPhone or MacBook -- and is equally as likely to have an Apple Music subscription upon purchase.

But the restriction isn't limited to, say, personal playlists. The HomePod also has extremely limited availability when it comes to general queries, like this one:

Compare that to the abilities of Alexa and Google Home, which, on some level, understand what kind of music you're looking for -- and can prompt either its own respective music catalog or Spotify's to play a radio station or playlist to match.

"Apple's music marketplace and ecosystem are an extension of that sticky platform I mentioned earlier," Raheja explains. "It already has enough Apple Music users that Apple doesn't have to bet on being like Amazon and Google do."

The keyword here is "platform": the idea that Apple is, at once, its own ecosystem, operating system, and brand.

And that, says HubSpot Marketing Fellow Sam Mallikarjunan, could indicate "a war of platform attrition."

"Everyone wants to be the platform, not be featured on the platform," he explains. "By adding third-party services, Apple would add value for the subset of users who like both Apple and Spotify, for example, as well as gain some small amount of additional information about their tastes."

But there's a catch to obtaining that data. "By allowing Spotify or Pandora, Apple would also be feeding those services additional revenues and exposing its existing base to alternative options," Mallikarjunan elaborates. "There's not a ton of upside there for Apple, who would probably like to see a world in which there were no Pandora or Spotify."

If that were the case, he points out, both Amazon and Google's native music services would be in direct competition with Apple Music -- creating the platform war he previously alluded to.

But This Isn't Only About Music

The HomePod, overall, is a bit of a general disappointment when compared to the basic functions of Alexa and Google Home -- and that's coming from someone who uses both a MacBook and an iPhone.

Plus, it's recently come to light that the product might be hazardous, reportedly leaking an acidic substance onto and damaging wood surfaces. See below: 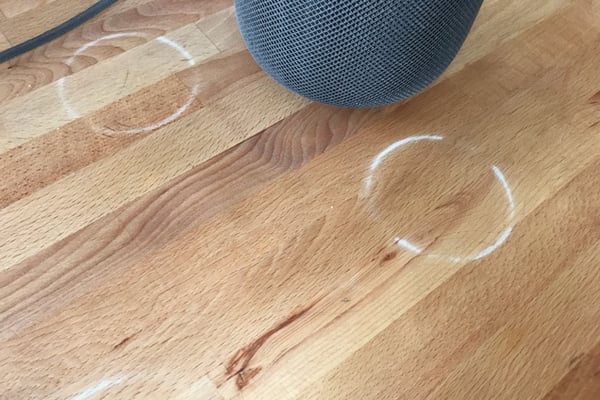 Oh, and few other things: The HomePod can't make phone calls. It can't integrate with my calendar. It can't send messages. And in a recent accuracy test conducted by Loup Ventures, it only answered 52% of queries correctly, compared to Google's 81% and Alexa's 64%.

Keep in mind, Siri can do many of these things on the iPhone. So why take away those functionalities on its giant, borderline cumbersome smart speaker version?

To that, Raheja points to Apple's tardiness in entering the smart speaker market.

"It's possible that Apple just wanted to get to market," he says. "Integrating Siri can be done, but not as quickly as pushing a good consumer speaker, quickly."

If that's the case, what's the fate of the HomePod? Will even the most brand-loyal Apple users be satisfied enough with superior sound quality (the only apparent advantage) that they'll be able to ignore -- or at least tolerate -- these seemingly limited capabilities?

"Homepod is a good fit for Apple users, but not great, unless you're wholly committed to the Apple ecosystem," says Raheja. "It has Siri, but those abilities are limited. Something like Alexa is much more flexible."

Who does Raheja think will win the platform war?

"The reason Amazon will win this space, in my opinion," he says, "is that it also lets you buy things. And very soon, that could be a standard channel for everyday transactions."

I'll admit that filling my home with not one, not two, but three smart speakers what the kids might call "extra": an unnecessary amount of both clutter and connectivity in a place that's supposed to be an abode and retreat from my day-to-day tech life.

But I was delighted to learn I'm not the only one who uses multiple devices of this kind under the same roof. When I found out that Marketing Blog Section Editor Karla Cook also has both an Echo and a Google Home, I asked if she uses both for different things.

"Google Home is for questions," she said, with a nod to Google's origins as a search engine. "Alexa is strictly a kitchen tool."

And while the Google Home can also be used for cooking purposes like finding recipes, translating measurements, or reading instructions, it does draw attention to the fact that Alexa lacks the general information-finding abilities of its Google and Apple counterparts. Remember that accuracy test from earlier? While both outperform Siri's information-finding ability, Google Home outperformed Alexa answers by 17%.

Ultimately, what that teaches me is that even with a branded ecosystem, smart speakers are still highly fragmented.

In a way, one might compare them to the different messaging platforms available from Apple (iMessage) and Android devices. Sure, they can work together to some degree and allow users of both products to communicate. But without a cellular connection, for example, they can't send and receive messages to or from one another.

None of the devices, when used alone, are bad. They all have quite a bit to offer, depending on the preferences of their respective users.

I do look forward to the day, however, when these devices work as true ecosystems -- and can maintain a degree of brand loyalty while also allowing individual users to fully personalize their experiences with them.

But, I will end our little roundup with a sentiment of gratitude. The fact that we are living in a time that -- for me, at least -- our parents could once only imagine by way of science fiction novels and films, is truly magnificent. We are lucky to witness this technology unfold.

I believe there's a quote from the Rolling Stones that applies well here: "You can't always get what you want, but if you try, sometimes, you get what you need."