10 VR Marketing Examples to Inspire You in 2021 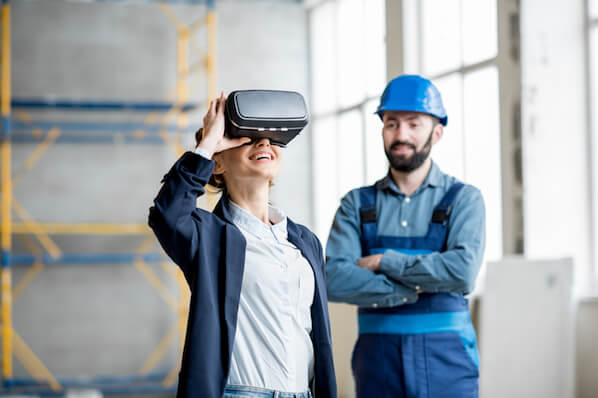 I won't lecture you on the importance of incorporating virtual reality (VR) into your marketing strategy.

What I will do, however, is share a few fun facts about VR and show you nine examples of this technology used for marketing a product or a brand.

VR is being adopted quickly, and adding it to your marketing channels is something you should definitely think about for the coming year.

VR, short for virtual reality, is a form of interactive software that immerses users in a three-dimensional environment -- usually by way of a headset with special lenses -- to simulate a real experience. Ideally, VR allows people to simulate the experience in 360 degrees.

Numerous industries are now finding uses for VR in order to transport people to places they might otherwise have to travel to, or simply imagine. While movie companies, for example, are giving audiences the opportunity to experience the movie as if they're a character in the scene, conventional businesses are now using VR to demonstrate and promote their products to potential customers.

Before we dive into some of the businesses that have found success injecting their marketing with a dose of VR, it's worth noting that virtual reality has a few key differences from another term you might've heard before: augmented reality. Find out what these differences are in the video below.

While some brands were making full out VR experiences from scratch, Wendy's identified how it could engage with gamers in Fortnite's virtual world. Although this example is not technically a VR experience requiring a headset, the brand still leveraged a virtual world to market its product and tall a story.

In Wendy's first ever Twitch stream, which won a Gold Clio, followed an avatar dressed as Wendy who appeared on the online battle game.

At one point in Fortnite’s online storyline, players were prompted to hunt cattle and transport beef to freezers at nearby restaurants. Once they did this, the players would earn coins.

When the Wendy's team heard that Fortnite players were being encouraged to put beef in freezers, the chain tasked its marketing agency, VMLY&R, in creating an avatar that looked like Wendy. Wendy's and its marketing firm then launched a Twitch stream where the avatar began to break into restaurants and destroy freezers:

Like a commercial, native ad, or advergame, the goal of the campaign -- aside from engaging new audiences -- was to remind Twitch audiences that Wendy's makes an effort to serve the freshest, best tasting beef to its customers.

During the stream, mentions of Wendy's on social media went up by 119%. The stream was also viewed for a total of 1.52 million minutes with a quarter of a million viewers.

The campaign also allowed Wendy's fans to interact with her avatar and the stream, which led other Fortnite players to start smashing freezers as well. Viewers of Wendy's stream also began tweeting about it or posting in the feed's comment thread. Because of engagement like this, it made Wendy's company values, brand, and live stream incredibly memorable to gaming audiences.

Additionally, this campaign allowed the brand to engage and interact with gaming audience in a new and innovative way.

According to one Cannes Lions Jury Chair PJ Pereira, the creativeness of this campaign might have opened the door for new marketing opportunities in the future.

“[The campaign] was setting up a new trend instead of being the apex of a previous trend,” Pereira told Ad Age.

Key Technology, a manufacturer and designer of food processing systems, created a Virtual Reality demo that would allow attendees of the Pack Expo food packaging trade show to experience a detailed, hands-on look at how the company's VERYX digital food sorting platform works. It was part of a comprehensive B2B campaign to grow brand awareness among a target audience of food manufacturers, and VR gave participants a highly unique look at what exactly the process looks like inside of the machine.

While this 360-degree video doesn't completely replicate the experience, it does indicate the differentiating way brands within such B2B industries as manufacturing can leverage VR to immersively demonstrate their sophisticated technologies and capabilities.

3. Defy Ventures and Within: Step To The Line

When my colleague attended Oculus Connect in October, the most memorable experience for her was, by far, the event's VR For Good exhibit: a showcase of creative work that used Oculus and VR technology for social- and mission-focused ventures.

One such example of that work was Step To The Line: A short film (that was immersively viewed on a VR headset) documenting the lives of inmates at California maximum-security prisons. It was created by Within, a VR storytelling production company, in partnership with Defy Ventures, an entrepreneurship and development program for men, women, and youth who are currently or were formerly incarcerated.

With this unique watching experience, viewers were able to uniquely see what life is like within the walls of these correctional facilities, from the yard, to the cells, to the conversations that take place there.

For far too many people, injuries, age, and disease can diminish mobility and equilibrium to the point where walking ranges from extremely painful to nearly impossible.

That's why the folks at Limbic Life created the Limbic Chair, in partnership with the VITALICS research being conducted by RehaClinic. Pairing this special chair with a Gear VR headset allows users to more intuitively move their bodies (thanks to the chair's combined neuroscience-based and ergonomic design) while virtually experiencing day-to-day experiences with a rehabilitative use of their hands and legs.

While the research is still underway and no definitive conclusions have been drawn, my coworker had the opportunity to use the chair at the 2017 Samsung Developer Conference and speak with the chair's creator, Dr. Patrik Künzler.

"Patients enjoy being in the chair and the freedom of movement it allows. They enjoy VR a lot, especially the flying games," he told Samsung Business Insights. And not only can the VR technology help them physically heal, but it also contributes to emotional rehabilitation.

"When they get up from the chair," Künzler said, "they’re in a good mood and feel happy.”

Learn more about the conceptualization behind the Limbic Chair from Künzler's TEDxZurich talk below.

Anyone who's gone through the existential angst of being a first-time buyer knows the unfathomable power of paperwork and finances to undermine the fun of designing or decorating a new home.

That is, until you walk into one of 19 Lowe's stores that features the Holoroom How To VR experience.

Some homeowners are lucky enough to pay a professional to renovate their home when it needs to be. For others -- Lowe's core buyer -- the next stop is the world of do-it-yourself (DIY) home improvement, which comes with its own hefty dose of stress.

That's why Lowe's decided to step in and help out homeowners -- or recreational DIY enthusiasts -- with a virtual skills-training clinic that uses HTC Vive headsets that guides participants through a visual, educational experience on the how-to of home improvement.

One of my colleagues recently pledged to give up dairy -- okay, 48 hours ago -- and she already claims to miss cheese, a lot.

You can imagine her happiness, then, when she discovered that the cheese brand Boursin once created a VR experience to take users on a multi-sensory journey through a refrigerator to shed light on its products' flavor profiles, food pairings, and recipe ideas.

The goal: to raise awareness among U.K. consumers of Boursin's distinct taste and product selection.

While the VR installment was part of a live experiential marketing campaign, the rest of us can get a taste -- pun intended -- of the virtual experience via this YouTube video.

In 2017, Adidas partnered with Somewhere Else, an emerging tech marketing agency, to follow the mountain-climbing journey of two extreme athletes sponsored by TERREX (a division of Adidas).

And what good is mountain climbing to an audience if you can't give them a 360-degree view of the journey?

Viewers were able to follow the climbers, Ben Rueck and Delaney Miller, literally rock for rock and climb along with them. You heard that right -- using a VR headset and holding two sensory remote controls in each hand, viewers could actually scale the mountain of Delicatessen right alongside Rueck and Miller.

This VR campaign, according to Somewhere Else, served to "find an unforgettable way to market TERREX, [Adidas's] line of outdoor apparel & accessories." What the company also did, however, was introduce viewers to an activity they might have never tried otherwise. Instill an interest in the experience first, and the product is suddenly more appealing to the user.

Check out the campaign's trailer below.

Toms, a popular shoe company, is well known for donating one pair of shoes to a child in need every time a customer buys their own pair. Well, this charitable developer found a new way to inspire its customers to give -- wearing a VR headset.

The Toms Virtual Giving Trip is narrated by Blake Mycoskie, the founder and Chief Shoe Giver of Toms, and one of his colleagues.

As they describe the story of Toms' founding, their VR experience takes viewers on a trip through Peru, where Blake and the shoe-giving team visit a school of children who are about to receive the shoes they need for the first time.

What Toms' VR campaign does so well is something cause-driven organizations all over the world struggle to do: Show donors exactly where their money is going. Even without a VR headset, the video below gives you an experience that's intimate enough to put Toms on your list for your next shoe purchase.

DP World is a global trade company that helps businesses transport goods around the world. As the company opens new terminals, however, they need a way to show their customers what DP World's property has to offer.

DP World's recently opened Caucedo facility in the Dominican Republic is just one of several DP World properties that uses VR to promote its large and often mysterious ships and land masses as they suddenly appear in a community.

Is trade logistics a sexy industry? Not to everyone. But that's exactly why a 360-degree tour of DP World's terminal is so valuable here. Show people just how efficient, safe, and crucial these properties are to certain businesses -- without making them put on a hardhat and walk through the port itself -- and you can gain massive community support.

Just because you couldn't attend TopShop's fashion show during London's Fashion Week doesn't mean you couldn't still "be there."

TopShop, a women's fashion retailer, partnered with Inition, an emerging tech agency, to give customers a "virtual" seat of their fashion show by wearing a VR headset connected to the event as it was happening.

The groundbreaking campaign put viewers right next to the fashion runway and the seats of the celebrities who were attending. Talk about making sure your brand is inclusive ...

Check out the video below, recapping the experience.

As you read this, you might be thinking, "Why should a small-business marketer like myself be learning about high-priced VR campaigns?"

Well, although VR might be too costly for many. marketing budgets, it's getting more and more abundant in society, As it grows, we're seeing a handful of brands leverage it for product promotion and virtual storytelling. And, while you might not be able to create a VR-based campaign, you can gather some great takeaways related to marketing innovation, content marketing, or visual storytelling which can give you other ideas of how to better interact with your digital audience.

Want to see how other emerging technologies will impact your marketing? Check out A Practical Approach to Emerging Tech for SMBs: AI, Blockchain, Cryptocurrencies, IoT, and AR/VR.

The Ultimate Guide to Marketing Trends in 2021

How to Create Content for Gen Z, From a TikTok-Influencer-Approved Marketing Agency