Twitter, a social networking site launched in 2006, is undoubtedly one of the most popular social media platforms available today, with 100 million daily active users and 500 million tweets sent daily. 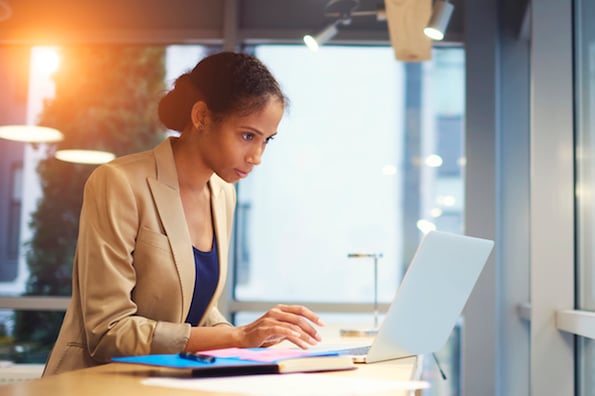 But its popularity can be intimidating -- if you don't know how to use Twitter in 2019, should you even bother trying to join the masses who've acquired years of experience on the site?

Fortunately, Twitter is incredibly easy to use. Here, we'll cover what Twitter is, who uses Twitter, and how you can get started on the site, today.

In 2006, Jack Dorsey, co-founder of Twitter, had an idea -- he would create a SMS-based communications platform in which friends could keep tabs on each other by updating statuses. In the beginning, Twitter was an idea all-too-similar to texting.

The idea evolved, in large part due to brainstorming sessions with Dorsey's co-founder, Evan Williams.

Twitter saw explosive growth at the 2007 South By Southwest Interactive conference, during which more than 60,000 tweets were sent. The Twitter team took advantage of the conference to begin growing their user base.

Twitter began as an SMS-based platform, so the 140 character limit was initially simply a necessity -- mobile carriers imposed the limit, not Twitter.

However, as Twitter grew to become a web platform, they kept the limit simply because it aligned with Twitter's brand -- Twitter is a platform that aims to create highly skimmable content for our tech-heavy, attention-deficit modern world.

Twitter has grown exponentially over the past 10+ years. Its purpose is ultimately to spread information fast -- while that information is not always serious (Kim Kardashian's thoughts on makeup, for instance), it sometimes is (like when Iranian protesters used Twitter to assemble marches). 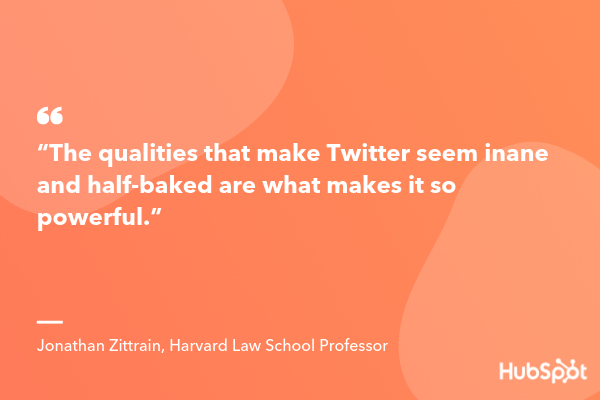 In many ways, Twitter has both unlimited meaning and immeasurable potential. It can connect you with someone in Thailand as quickly as it can introduce you to your next-door neighbor. You might choose to fill your feed with industry professionals, news sites, celebrities, comedians, or friends.

By enabling each user to curate their content to their personal desires and interests, Twitter has successfully created a highly-addictive platform.

Twitter is a social media site, and its primary purpose is to connect people and allow people to share their thoughts with a big audience. Twitter allows users to discover stories regarding today's biggest news and events, follow people or companies that post content they enjoy consuming, or simply communicate with friends. Additionally, PR teams and marketers can use Twitter to increase brand awareness and delight their audience.

Twitter can be a very helpful platform for growing a following and providing your audience with valuable content before they even become customers. The character limit can also help you create quick-and-compelling advertisements, like a shout-out to a webinar your business is conducting, or a free e-book.

It's important to note, you can use Twitter to advertise your products or services, but you should do so sparingly. Like any social media marketing strategy, your primary focus should be on attracting an audience with useful content and growing brand awareness.

Additionally, you can use Twitter to connect with your audience in personal and meaningful ways. If someone mentions one of your products or services, you can "like" or "retweet" their comment. Alternatively, if a customer complains about your services on Twitter, you can reach out to rectify the situation in real-time.

Fill out the form to get your free kit.

Twitter has often been used to spread breaking news quickly -- at times, it's even faster than traditional media outlets at spreading groundbreaking information quickly.

For instance, when the US Airways plane crash-landed in the Hudson River in 2009, Janis Krums was one of the first to spread the word via Twitter, before many media outlets even caught on: 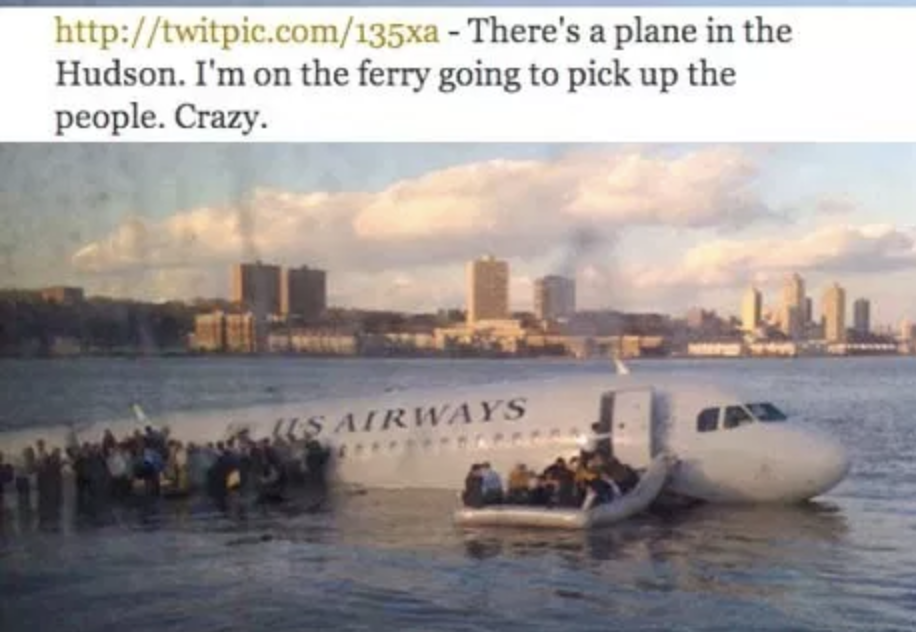 As a reporter, you could amass a large following by tweeting short descriptions to alert your audience of daily events.

Additionally, many celebrities, athletes, and politicians choose to post on Twitter directly rather than speaking through media outlets when they want to share information with their fans -- so Twitter is often a helpful avenue when you're looking for insider information or direct quotes to use for an article.

Of course, there's a danger in using Twitter as a primary source of news -- the limited character count, for one thing, enables Twitter users to spread one-sided information without having the space to offer the full-story. If you're a reporter, it's likely best if you use Twitter to post short snapshots of larger events, but stay clear of offering controversial opinions when you don't have the text space to back it up.

If you work in PR, you might consider using Twitter to post announcements about one of your clients -- for instance, you could tweet about a release date for a client's product, or an upcoming event.

Twitter can also help you quickly figure out what your client's competitors are discussing, to ensure your client is up-to-date on industry trends, and participating in the larger conversation.

Finally, Twitter allows you to network with professionals or influencers who might have an interest in working with your client.

You can use Twitter for entertainment purposes, or to stay in contact with friends and family. At its most basic, Twitter is similar to sending out a 140-character mass text to everyone you know -- you could use it to share a funny story, post a compelling video, or ask your audience a question. The choice is yours.

Twitter is a social networking site in which you can post 140 character status updates, otherwise known as "tweets", that can be seen by anyone who has chosen to follow you. Within the tweet, you can link to other articles or videos. Additionally, you can scroll through your Twitter homepage to see what other people, who you've chosen to follow, are posting. For instance, you can use Twitter for professional use only, and choose to follow industry leaders in your field. Alternatively, maybe you just follow comedians, and use Twitter as a source of amusement.

If you're ready to get started with Twitter, here's how it works -- don't worry, it's relatively simple.

If you're interested in posting something, you'll want to click the text box that says "What's happening?". You can include pictures, a GIF, or a poll using the icons below the text box.

If you're not sure what to post, consider pasting a URL into the box of a funny video or interesting article, with your own brief personal take on the content.

Also, yes -- I should probably read through my 100+ notifications.

To peruse popular content, you can click the "Moments" section at the top. This will show you trending topics in a variety of subjects, including News, Sports, Entertainment, and Fun.

To follow specific people, you can type their name into the search box. When you click on their name, you'll be directed to their profile. There, click the "Follow" button to the right to begin following them -- this means any tweets they post will appear on your homepage. 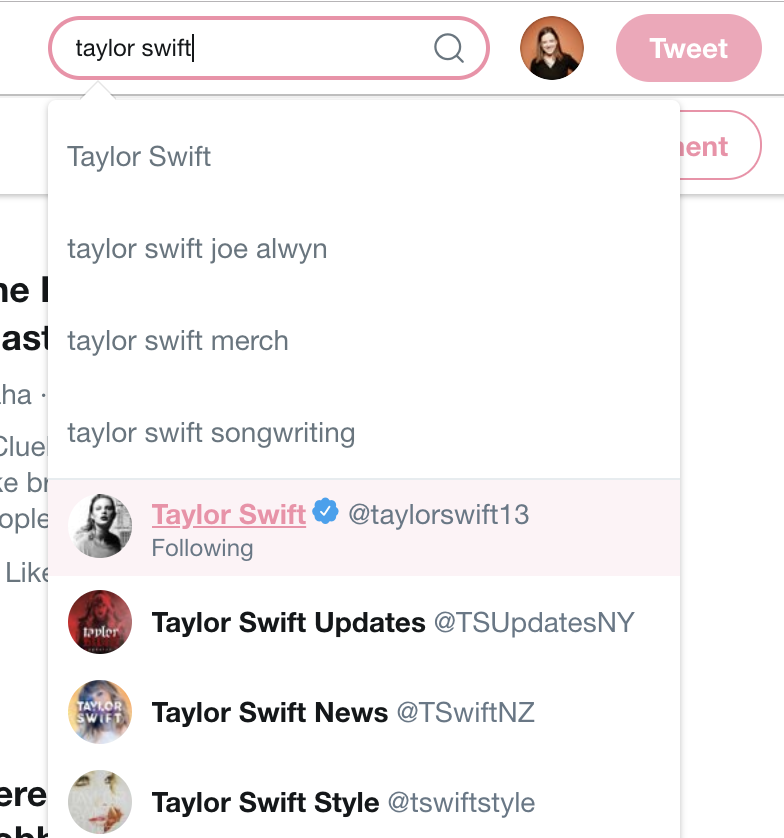 How to Engage With Other People's Tweets

To engage with someone else's content, you can "Retweet" it. This allows you to share someone else's tweet with your own audience, and to show your agreement or approval of the tweet (for instance, if someone posts a video of a good song and says "This is the best song!" and you retweet it, you're signaling to your audience that you also like the song and want to share it). 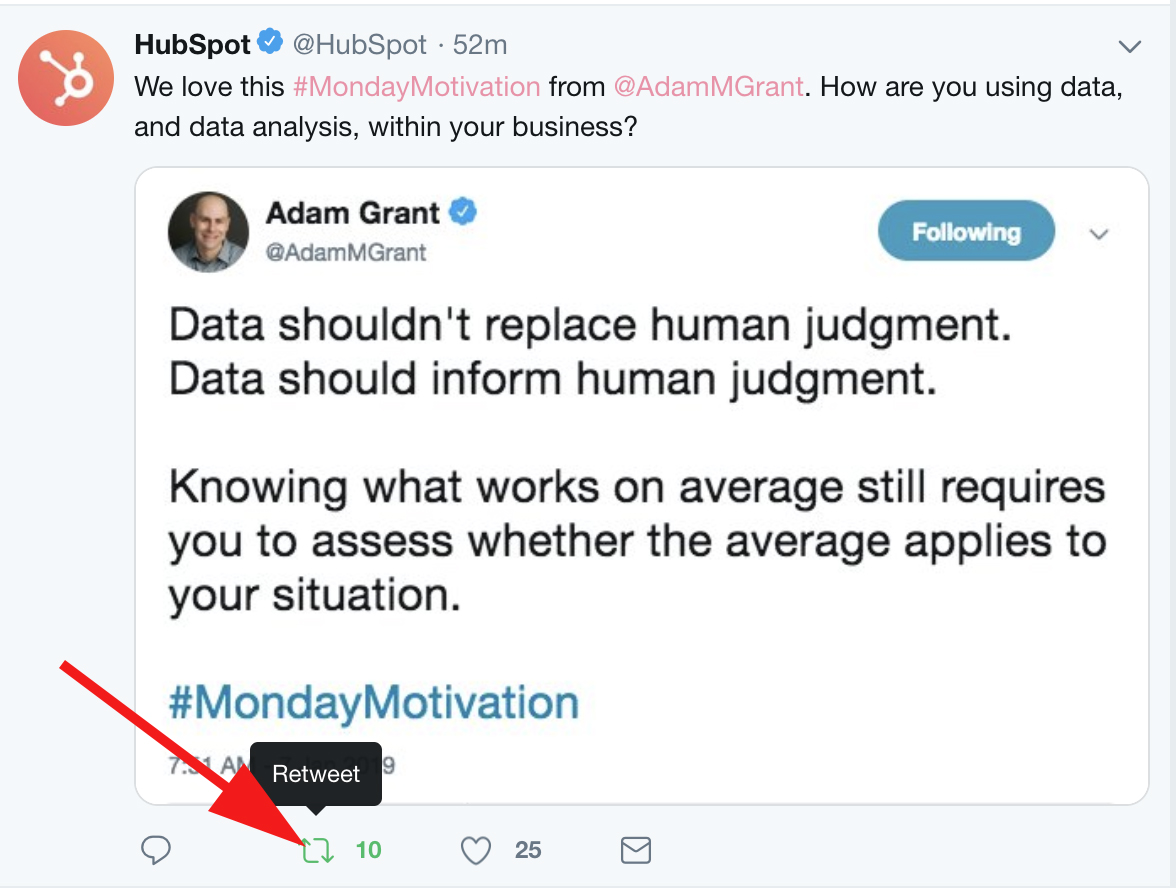 Finally, you can click the mail icon if you want to Direct Message the tweet to just one person, or just one specific group of people.

Next, to learn how to use Twitter for your business, check out How to Build a Community of Twitter Followers for Your Company.