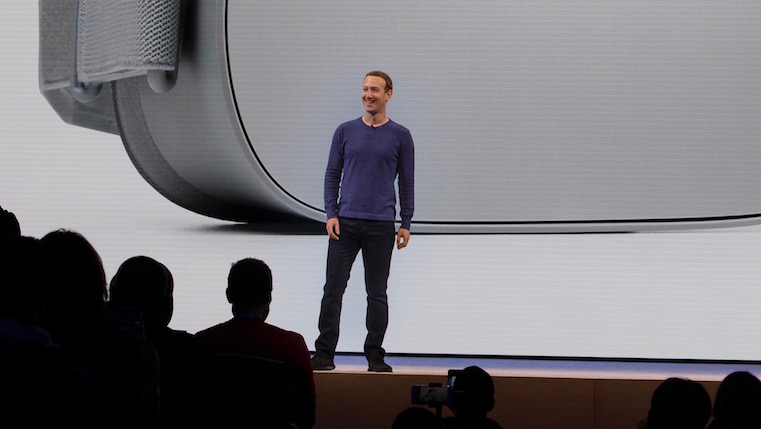 Facebook CEO Mark Zuckerberg is due to testify before members of European Parliament (MEPs) tomorrow, in an appearance that was confirmed by President Antonio Tajani on Twitter last week.

Mark Zuckerberg, Facebook CEO and founder, has accepted our invitation. He will come to the European Parliament. My full statement ⤵️ pic.twitter.com/FdmuDPl8Wb

Zuckerberg is due to appear before the Committee for Civil Liberties, Justice and Home Affairs (LIBE), where he'll likely be asked questions about protecting the personal data of EU consumers, as well as Facebook's role in election processes and integrity.

The session -- which is scheduled to begin at roughly 6:15 PM local time in Brussels (12:15 PM EST) -- was speculated and predicted by many in the weeks leading up to Tajani's confirmation.

In addition to some outlets reporting that such a meeting was in the works, several events took place soon before and after the announcement that indicated another appearance from Zuckerberg before legal officials, ranging from official statements on Facebook's new initiatives, to changes within its organizational chart.

Before Zuckerberg makes his next official appearance, here are some key things to know.

1. The testimony was originally scheduled as a closed-door session.

Shortly after Tajani's announcement, Bloomberg reported that Zuckerberg's initial appearance before EU lawmakers would take place behind closed and that European Parliament would schedule a separate, public hearing with representatives from Facebook that may not necessarily include Zuckerberg himself.

I have personally discussed with Facebook CEO Mr Zuckerberg the possibilty of webstreaming meeting with him. I am glad to announce that he has accepted this new request. Great news for EU citizens. I thank him for the respect shown towards EP. Meeting tomorrow from 18:15 to 19:30

While a secondary hearing has yet to be scheduled, as of publishing this piece, Tajani announced this morning that Zuckerberg agreed to permit the session to be live-streamed -- likely due to pressure from several parties, including MEPs.

I will not attend the meeting with Mr Zuckerberg if it’s held behind closed doors. It must be a public hearing – why not a Facebook Live? I strongly regret that the @EPPGroup has colluded with extreme right to keep everything behind closed doors. https://t.co/uYqEDlRtyo

In our own survey of 313 consumers in the UK -- which was conducted prior to the announcement that the session would be live-streamed -- 61% of respondents said that they believed the testimony should be public.

Verhofstadt has since reversed his statement on the matter, after the decision to cast the session. However, the degree to which the event will be "public" is , as it's not clear if members of the press or other concerned public parties will be permitted to attend.

2. Not long before the testimony was originally announced, Facebook's executive org chart had a major shakeup.

On May 8 -- just over a week before Tajani's confirmation that Zuckerberg would be testifying before MEPs -- Recode reported a major shuffle to its executive organizational chart, with changes made among the leadership at WhatsApp, Messenger, Instagram, and the core Facebook app.

Here's a visual peek at the overall changes:

In addition to the general re-org of leadership within existing Facebook teams and umbrella brands, a new team has been created to focus solely on privacy products, such as the Clear History feature announced at F8.

When word of the executive shuffle first arrived, we anticipated that an official appearance from Zuckerberg could be imminent -- especially with the creation of an entire division dedicated to one of the issues (privacy) for which Facebook has received the most scrutiny, and continues to answer the most questions.

Why do I sense that where there’s a Facebook executive re-org, there are overseas hearings to follow?

But privacy isn't the only topic for which Facebook has faced particularly heightened scrutiny -- which brings up another important item to keep in mind going into tomorrow's session.

3. The day after the testimony was announced, Facebook announced a partnership with the Atlantic Council for its election integrity efforts.

Facebook has also continued to receive criticism and questions about the weaponization of its platform by foreign actors to influence the 2016 U.S. presidential elections. Since then, consumers and authorities alike have been especially vigilant of the spread of misinformation and hate speech on the site, especially where divisive issues that often cause contention during election seasons are concerned.

That prompted Facebook to release its first-ever Community Standards Enforcement Report, which includes a preliminary inventory of rule-violating content and the action Facebook took on it between October 2017 to March 2018.

But it also led Facebook -- whether strictly for appearances or out of genuine concern over the weaponization of its platform -- to partner with outside experts to boost its election integrity efforts, which Zuckerberg is likely to be questioned on by MEPs.

To help combat "fake accounts – the source of many bad ads and a lot of misinformation," Facebook has partnered with nonprofit Atlantic Council, whose mission includes "stimulating dialogue and discussion about critical international issues in the Administration, the Congress, corporate and nonprofit sectors, and the media among leaders in the U.S., Europe, Asia, and the Americas."

The Atlantic Council's Digital Forensic Research Lab -- the primary team partnering with Facebook -- released a statement about the collaboration, in which it elaborated on that mission. Specifically, it pointed to the importance of closing the "information gap between governments, tech companies, and media in order to solve challenges like disinformation."

It was an interesting statement to make the day after it was first revealed that Zuckerberg's session with MEPs would be a closed-door one, limiting the very transparency between governments and tech companies to which the statement alluded.

It also came after a recent and repeated refusal from Facebook of requests from UK Parliament for Zuckerberg to appear -- which is another key item to note before tomorrow's session.

4. UK Parliament has requested an appearance from Zuckerberg repeatedly -- and Facebook has continued to decline.

On May 1 -- just over two weeks prior to Tajani's announcement -- House of Commons Culture Committee chairman Damian Collins issued an open letter to Facebook UK Head of Public Policy Rebecca Stimson, stating that "the committee will resolve to issue a formal summons for [Zuckerberg] to appear when he is next in the UK."

In response to that letter, Stimson wrote a response on May 14th indicating that "Mr. Zuckerberg has no plans to meet with the committee or travel to the UK at the present time."

Zuckerberg's resolve to not appear before UK Parliament raises several questions. While other Facebook executives have undergone questioning from the committee, like CTO Mike Schroepfer, Zuckerberg himself has steadfastly refused to appear, despite committing to back-to-back U.S. congressional hearings, as well as tomorrow's testimony before MEPs.

The @facebook data breach was executed @Cambridge_Uni and the data went to UK company @CamAnalytica The data breach affected over 1 million UK Facebook users. I think @CommonsCMS should be able to question Mark Zuckerberg about this and the lessons to be learned from it

So, why the resistance to testifying before UK MPs?

One possible reason is that Zuckerberg's appearances before U.S. lawmakers were voluntary -- as will be his testimony before MEPs -- whereas UK Parliament has reached the point of issuing a formal summons.

“It’s not entirely clear why Zuckerberg is resisting appearing before UK members of parliament,” says Henry Franco, HubSpot's social media editor. “We know that the tone from the UK has been a fairly vindictive one, and we also know Zuckerberg (and Facebook) doesn’t want to open the door to negotiation and questioning from every governing body. They want a free and independent Facebook, which means answering the bare minimum number of questions necessary to keep it that way.”

5. The testimony is taking place three days before the General Data Protection Regulation (GDPR) comes into force in the EU.

This Friday -- three days after Zuckerberg's scheduled testimony before MEPs -- the GDPR comes into force in the EU, marking a major shift in European data privacy laws and consumer rights.

Whether the timing was deliberate is somewhat speculative, but it appears to be slightly more than coincidental -- at least on the part of European Parliament. Facebook has received criticism for its approach to the GDPR, and Zuckerberg has frequently evaded questions about how he would apply similar protections to non-EU consumers, or backpedaled on previous answers to them.

Rep. Green is the first to bring up the GDPR and it coming into force next month. Asks about Zuckerberg's intention to make the same settings and protections available to Americans. "Yes Congressman, all the same protections will be available ... around the world."

Many wonder how these imminent regulations -- which are much stricter than those, if any, in the U.S. -- will influence MEPs' lines of questioning tomorrow, and if those questions will reflect the tougher nature of European laws than those in the U.S.

The general consensus seems to be that, yes -- they will. When we asked 302 consumers in the UK if they believe MEPs will be harder on Zuckerberg during tomorrow's hearing U.S. lawmakers were in April, 48% responded with "yes."

In a survey of 303 U.S. consumers, meanwhile, 53% of respondents had the same answer.

"My sense is that the big difference between the EU and the U.S., is that consumers in the U.S. kind of don't care," says HubSpot VP of Marketing Jon Dick. "We just assume we're being taken advantage of and are okay with it."

The heightened level of concern among European consumers, meanwhile, could be reflected in a tougher line of questioning from MEPs tomorrow.

"Consumers in the EU care. They want proper notice and controls, and they want companies to be held to account if they violate their data privacy," Dick continues. "So my expectation is that EU Parliment will be far tougher on [him] than the U.S. Congress was."

We'll be following tomorrow's testimony. According to a tweet from Carlo Corazza, a spokesperson for Tajani, the event will be live-streamed on European Parliament's website.