Don't Freak Out, but Facebook Added a New Kind of Feed

When Facebook makes any change to its algorithm or News Feed, the standard response is that cause for panic.

For example, you may have recently heard some speculation around the channel's recent "Explore Feed" rollout: an alternative News Feed designed to help users discover content outside of their existing networks, like friends and Pages they already follow. Hence, the name -- it allows users to "explore" new content, without leaving Facebook.

That, of course, is likely Facebook's main motivator and aligns with its growing efforts and modifications that encourage marketers to create content exclusively for this particular channel, rather than linking to content that requires users to navigate elsewhere.

But here's our take on the matter: for panic. In fact, it could actually help your brand.

Let's start with the fact that this alternative feed has actually been available to mobile users for quite some time now, under the "More" menu that you find inthe navigation options toward the bottom of the app. 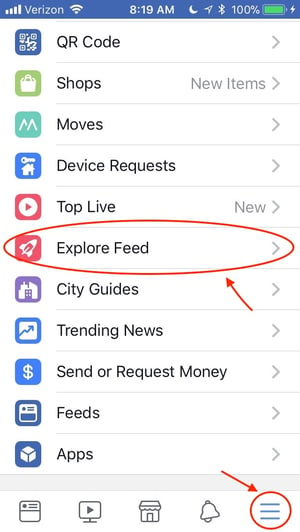 Now, it's been rolled out to desktop users on the navigational , which Facebook confirmed in a statement to TechCrunch:

“We are beginning to roll out a complementary feed of popular articles, videos, and photos, automatically customized for each person based on content that might be interesting to them. ... We’ve heard from people that they want an easy way to explore relevant content from Pages they haven’t connected with yet.”

But what does this mean for the marketers and brand managers who rely on Facebook to maintain a presence and grow awareness?

At this point, it appears that the Explore Feed is not replacing the News Feed, which will still be the main landing navigation for Facebook users. And that makes sense -- there would likely be quite an uproar from users who were suddenly flooded with content from brands they haven't actively followed, rather than their existing networks of friends, family, and followed brands.

So fear not: Users who have already Liked your page will still see your content, with the caveat that in 2015, it was reported that organic reach fell to 2.6% (you can read more about why that happened and how to work with it here).

Users have to voluntarily navigate themselves to the Explore Feed, which means that they have to actively choose to discover new content there. How that will ultimately perform, we can't be sure. But, according to my own scrolling experiment, it doesn't contain any paid ads or sponsored content -- yet.

Which indicates that, like so much else in the realm of a social media feed, the Explore Feed is based on an algorithm that curates content based on what you've liked and shared in the past. Admittedly, I don't use Facebook for personal purposes much, so the algorithm seems to be trying to figure out what I might like -- though, judging from the number of food- and dog-related posts appearing there, it could be well on its way.

"Take the opportunity to be present and engage more personally with your followers," advises HubSpot Academy Social Media Professor Crystal King. "Spend more time developing quality content that your followers will be excited to share."

The desktop rollout is in its earlier stages, so it's likely to evolve and undergo modifications as users adapt to it. As always, we'll be keeping an eye on it.