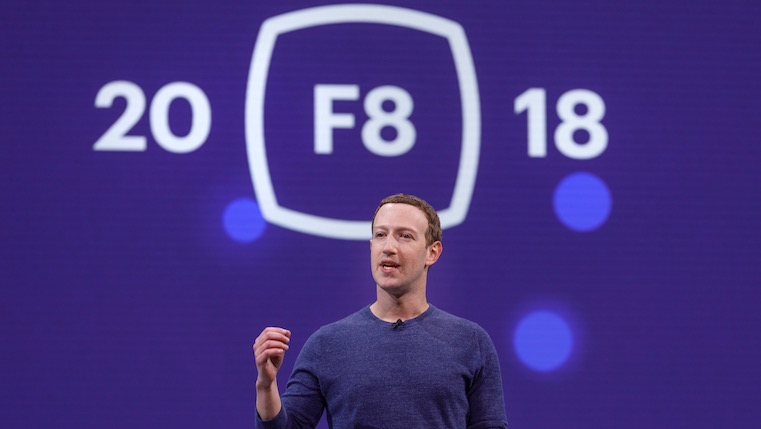 We kind of saw this coming, did we not?

In Facebook's most primitive days -- if you can remember a time when it was restricted to college students, there was no News Feed, and status updates forced the inclusion of the word "is" -- there was also the "Poke" feature.

Poking, as many of you recall, was a fairly simple feature in which you could click a button that allowed you to "poke" someone else on Facebook -- often, even if you weren't friends with the person. That user would then receive a notification that you Poked and could Poke you back, ignore you, or send you a message.

And I'm about to get real with . Back in the day, I loved the Poke feature. As a fresh college grad/twenty-something, Poking was a simple gateway to indirectly introduce yourself to someone with whom you had mutual friends but didn't yet know yourself, or -- as was more often in my case -- flirt with someone.

So, now, nearly 12 years after the height of my Poke usage, the inevitable has happened: Facebook is getting into the dating game. And that was just one of the major announcements made in today's opening keynote at F8: Facebook's annual developer conference in San Jose, California.

1. Leading up to the Event

There was a lot of speculation the nature of this year's opening keynote. I predicted that one of three things would happen:

In the end, it seemed that the keynote was a combination of the second and third predictions, with Zuckerberg kicking things off with a "mea culpa" and maintaining that theme of safety, people first, and privacy throughout the two-hour opener.

We kick things off with a video mea culpa. Really starting to think the keynote will go in the direction of leaning almost too far into “we messed up” pic.twitter.com/tg4tZMRkSM

"This has been an intense year," Zuckerberg said. "I can't believe we're only four months in."

And not just for him, he was sure to point out -- but for many of the developers that have long leveraged the Facebook platform to build experiences and marketing initiatives. Those in the audience, Zuckerberg acknowledged, were trying to use the platform to build good things, and that was why Facebook has reopened app review. (More on that here.)

Before the keynote even began, Zuckerberg published a post on his official Facebook page on the soon-to-be-launched "Clear History" feature, which will allow users to see which websites and apps send Facebook information on when they're used, and delete that information from their accounts. Users will also be able to turn off Facebook's access to and storage of that information in their accounts moving forward.

It's not entirely unlike the ability to delete your browsing history, cookies, and cache from a web browser, causing many to argue this move is long overdue for Facebook. And yet, writes Facebook VP and Chief Privacy Officer Erin Egan in a formal written announcement, "It will take a few months to build Clear History."

Facebook is adding a new "Clear History," catching up to, um, Netscape... @dmccabe in @axios https://t.co/0ufi4nJuUG

Overall, Zuckerberg opened the keynote with remarks not entirely unlike those used to start his congressional hearings last month: acknowledging Facebook's role in organizing good things, but how that's come with the bad -- including Russian interference and major setbacks from data privacy problems.

From there, the focus was almost entirely forward-facing, with an underlying theme of "people first."

2. The Emphasis On "People First"

Not long into his opening remarks, Zuckerberg commented on "how little of our industry is focused on people first ... I believe we have to design technology to bring people closer together."

That's one thing Facebook set out to do even before the Cambridge Analytica fallout, but after foreign interference was revealed, when it overhauled its News Feed algorithm in January to give ranking to content from friends and family.

Since then, Facebook has continued to lean into the narrative, announcing several new initiatives today to emphasize experiences on the network and other apps it owns that bring people together.

Facebook first unveiled its plans for Watch Party -- a group video-view feature that allows Facebook friends to watch an event together on the network -- in January, when Facebook VP of Product Fidji Simo published a blog post on the experience.

Today, Watch Party had its official debut, with Zuckerberg making light of his recent Congressional hearings as an example of something your friends might want to watch on Facebook together while commenting on it in real-time -- something his friends actually did last month, he said.

Ha , ha. On rolling out the new Watch Party feature: “let’s say your friend is testifying before Congress. Now you can watch it as a group” — which Zuck says some of his friends did, in fact. “Let’s not do that again any time soon.” pic.twitter.com/7ljwRX5hTw

Yes, here we arrive at the inevitable: new features Facebook is rolling out for the dating world.

To cover the ground rules, here are a few of the items Zuckerberg immediately addressed when he first unveiled this new, yet-to-be-named product:

Oh, Jesus. Facebook is launching "a new set of features around dating" ... focused on "long-term relationships, not hookups," and it's been designed "with privacy and safety in mind," and you won't see any of your friends in your potential matches.

Who else remembers when Poking was first a thing? #F8 pic.twitter.com/d1bsahkB5t

The news of Facebook for dating seemed to spook many investors in competing apps, like Match Group, which owns many of the players in the space, like Tinder. Here's a look at how MTCH's stock was behaving as of writing this post: 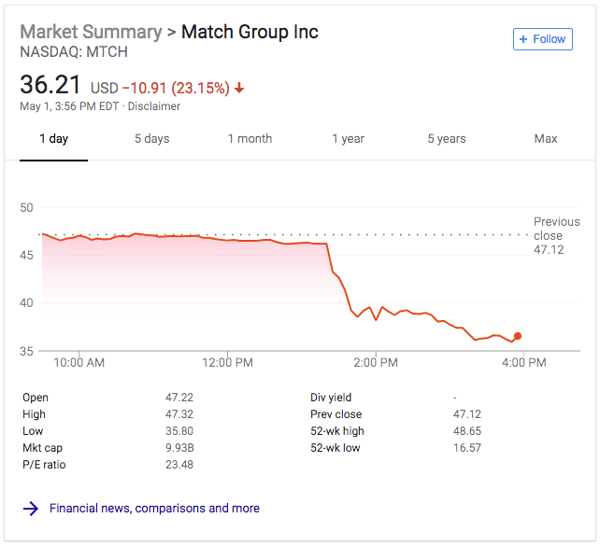 As I mentioned in the introduction, this move makes sense for Facebook, especially considering it will be integrated with the network's event and group features. For the former, for instance, users enrolled in the dating features can see other "singles" who will be at an event that interests them, and given tools to connect in advance.

It also aligns with Facebook's recent "bringing people together" campaign. Where once that was limited, at least on the surface, to friends and family, now there will be a designated system for forging romantic relationships through the site. That's the plan, at least.

But it serves as a possible significant new revenue stream for Facebook. Its pricing structure, if any, was not mentioned in today's announcement, and given the financial repercussions (even if they're only short-term) experienced by publicly-traded competitors, this could be another space for acquisition for Facebook.

One of the first brands I thought of was Bumble ...

Honestly though, Facebook getting into the dating game makes sense. I wouldn't be surprised if we see an acquisition down the road of the apps that aren't already owned by Match ... like Bumble, maybe

... who, according to a statement, had already been in talks about ways to collaborate, before today's announcement was made.

Here's a statement from Bumble about Facebook getting into the dating space. Reminder: Bumble is looking for an acquirer... pic.twitter.com/C8rk0jwb89

Watch Party wasn't the only new group chat feature unveiled today. Similar capabilities will also be coming to Instagram, with a video call feature due to roll out in the coming weeks. 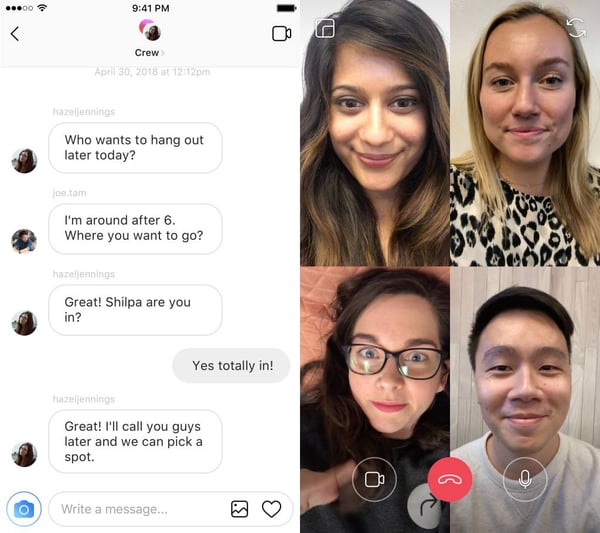 Even more significant, was Instagram's announcement it would be adding a new filter for bullying comments. This filter will have a particular emphasis on younger members of Instagram, especially public figures.

"This new filter hides comments containing attacks on a person’s appearance or character, as well as threats to a person’s well-being or health," the official announcement reads. "The bullying filter is on for our global community and can be disabled in the Comment Controls center in the app. The new filter will also alert us to repeated problems so we can take action."

This announcement comes after what Facebook later called a temporary "bug" that allowed all users to respond to a prompt asking if a given post contained hate speech. While it wasn't a carbon copy of these new Instagram filters, the timing was interesting, to say the least.

Some people saw 'does this post contain hate speech' today on some posts. This was a test - and a bug that we reverted within 20 mins. It was shown for a short time on posts regardless of their content (like this one). pic.twitter.com/iuNKSVTOqQ

Finally, Instagram is introducing new integrations within Stories: adding your listening activity from Spotify to your Story in real-time, as well as seamlessly adding GoPro video footage.

In what was arguably the most exciting moment for most of the keynote audience, Zuckerberg announced that its VR headset Oculus Go would be shipping starting today -- and that everyone attending F8 would be receiving their own.

Priced at $199, many of today's speakers made the case that at that price point -- combined with its wireless nature -- the Oculus Go is the "most accessible" VR headset on the market.

It's another step in the direction of Facebook's efforts to make VR a mainstream technology. That was an underlying theme at Oculus Connect in October, where Zuckerberg stated his goal of getting one billion people using VR -- by we aren't sure.

But it would be yet another revenue stream for Facebook, and the company might be leaning into these other brands and how they can be monetized in the wake of shell-shocked advertisers who might be straying from the platform in the wake of the Cambridge Analytica scandal.

In the meantime, Facebook is also leaning into augmented reality (AR) technology, namely by integrating new AR camera effects to Messenger: a program that will first launch in closed beta.

So Facebook now seems to be coming for some of the AR functionalities in iOS and on the Pixel that allow you to see what objects look like in your home environment #F8 pic.twitter.com/pmBOJT2bqD

That's a wrap on the major announcements from today. Day two of F8 kicks off with another keynote at 10:00 AM PST, and I'll be there, live-tweeting and offering insights.

Of course, after the event, there will likely be more thoughts coming out of the woodwork regarding how these changes can impact the tech industry at-large and the businesses that use it -- and I'll be offering up an analysis of it when the conference has concluded.

In the meantime, if you've got questions or something you're hoping to see come out of tomorrow's keynote, feel free to weigh in on Twitter.