Facebook Says It's Fixing the Fake News Problem, but This Fake Video Got 16 Million Views 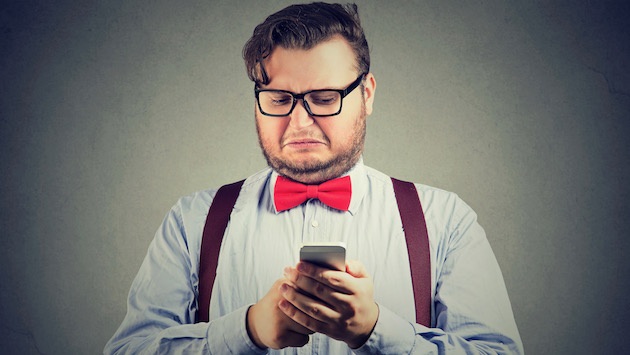 There's really nothing like a truly spectacular lunar event.

I remember the first time I saw a lunar eclipse, for example -- I was in the third grade and, for the first time, didn't immediately tune out my Dad's seemingly endless enthusiasm for science and history.

I also remember the first time I first witnessed a lunar new year celebration during a childhood trip to San Francisco. It, too, was enchanting and captivating.

And a supermoon -- who can miss that? In fact, earlier this week, people in certain parts of the world were treated to the phenomenon of a "super blue blood moon," in which a lunar eclipse, blood moon, and  are all combined.

Naturally, there was a great deal of chatter about in social media, with brands and other Pages jumping on board to celebrate this lunar event -- including a little-known Page for EBUZZ, which racked up 16 million views for its "coverage."

But here's the thing: The EBUZZ "live feed" of the supermoon -- casting over the Temple of Poseidon in southern Greece -- was actually just a continual broadcast of a still image with certain nature sound effects playing over it.

In other words, while Facebook has made several major announcements in 2018 about its efforts to curb inauthentic Page content, this largely inactive Page was earning views in the millions for what was essentially fake content. 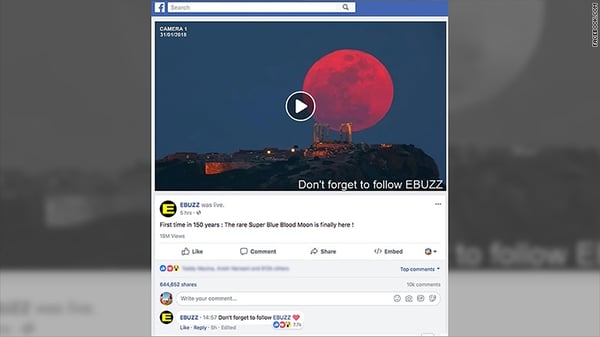 What's worse, the content wasn't original or recent. The photo being used for the live stream actually belongs to photographer Chris Kotsiopoulos.

The stream remained active for roughly four hours before Facebook removed it, though the EBUZZ Page -- which hadn't previously posted anything since September 2017 -- does appear to still be intact.

For context, Facebook tallies views according to the number of users who watch a video for at least three seconds, either directly on the Page or what it appears in their News Feeds.

engaged with the content long enough for the video to reach that metric raises questions about the strength and veracity of recent efforts announced by Facebook. In January alone, for example, the social channel committed to curbing the amount of Page content in users' News Feeds -- placing greater emphasis on content from personal networks -- surfacing more local news in certain regions of the U.S., and completely banning all ad content related to cryptocurrency.

And on January 19, Mark Zuckerberg also announced Facebook's efforts to ensure that news items appearing on Facebook would only be from "trusted sources."