FAQ This! Now That the FCC Voted to Repeal Net Neutrality, What Happens? 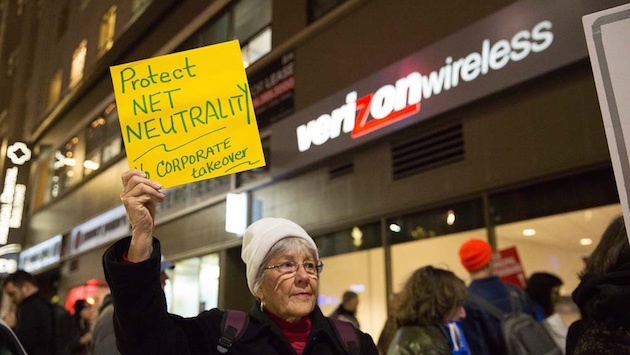 If you have questions -- you're certainly not alone.

How did this happen? What was the case for repealing net neutrality in the first place? And what, exactly, has the FCC voted to dismantle?

Normally, this is the part where I would say, "Relax -- I've got you covered." But for the sake of transparency, I'll be honest. I'm not particularly relaxed -- or happy, for that matter -- about this decision.

And while I will, as always, answer some of the most common questions about the vote as clearly as possible, know this: It's not easy for me to neutrally -- no pun intended -- report on the matter.

Perhaps the answers to these questions will provide some insights as to why.

1. What is net neutrality?

Net Neutrality is a collection of regulations that prevent internet service providers (ISPs) -- like Xfinity, Spectrum, or Verizon, for example -- from altering internet speeds or censoring online content. In other words, it allows free speech on the internet, without corporations deciding which sites or applications are allowed or blocked.

Net neutrality originally took effect in 2015, when the FCC approved net neutrality after years of debate, which included two rejections of earlier versions of rules and regulations. The tipping point came when Title II of the Communications Act -- I'll explain that in more detail in a bit -- which essentially laid the legal groundwork to bar ISPs from obstructing online information and access.

The post-net-neutrality web came to be known as the "open internet": a web where, as Free Press phrased it, users could "share and access information of their choosing without interference."

Here's where the legal aspect of net neutrality really comes into play -- but please note that this blog post is not legal advice and instead provides background information to help you better understand the background of and the vote to repeal net neutrality.

When we talk about the repeal of net neutrality, we're really talking about a reversal of Title II of the Communications Act. In 1934, the Act was first passed to regulate mass media communication -- at that time, it was things like "wire and radio".

The Title II section of the Act was written to regulate “common carriers” like utility providers of electricity and telephone landlines. And when efforts were made to enforce net neutrality, the turning point came when ISPs were reclassified as "common carriers" regulated under Title II. It's quite lengthy and can be read in full here, but using that reclassification as a foundation, the Open Internet Order went into effect, making the below, pivotal declaration (among many others):

" ... carefully-tailored rules to protect Internet openness will allow investment and innovation to continue to flourish. ... today we adopt carefully-tailored rules that would prevent specific practices we know are harmful to Internet openness— blocking, throttling, and paid prioritization—as well as a strong standard of conduct designed to prevent the deployment of new practices that would harm Internet openness. We also enhance our transparency rule to ensure that consumers are fully informed as to whether the services they purchase are delivering what they expect."

But last Thursday, the FCC voted to repeal this regulation and oversight, which will reverse things like:

3. What are the arguments for net neutrality?

They say that competition is good for the consumer -- it provides the public with various pricing and provider options companies both large and small.

As you may have noticed, in most U.S. regions, there isn't much competition -- if any -- for ISPs or cable providers. Here in Boston, the market is largely monopolized by Xfinity, and in others, it might be Spectrum or Verizon. There's very little room -- again, if any -- for smaller players, and without net neutrality, that same issue will extend to streaming content providers.

Take the Washington Post's example of Hulu and Netflix (the latter of which expressly dissented the repeal). While those two (large) companies will still be able to compete fairly, mostly due to their respective abilities to pay the post-repeal fees required for faster content delivery fees -- smaller players will have too high a barrier to the market.

This point might be the one that you've heard about the most. As we noted above, the Open Internet Order barred ISPs from censoring certain content, websites, or applications as they see fit. Now, those regulations will no longer be enforced.

And while such ISPs as Comcast promised to maintain net neutrality ...

... since last Thursday's vote, certain key pieces of its previous written commitment have been deleted from its website.

Here's what @comcast removed from their Net Neutrality page. They no longer promise to:

-Not throttle back the speed at which content comes to you
-Not prioritize Internet traffic or create paid fast lanes
-Make internet accessible to low income familieshttps://t.co/tRoOTyATYk pic.twitter.com/LqhnwwYSGv

4. What are the arguments against net neutrality?

Those in favor of repealing net neutrality, like FCC Chairman Ajit Pai, argued that such regulations were accomplishing little more than "micromanaging the internet." And by classifying ISPs as utilities, net neutrality opponents say, it stifles their abilities to innovate.

By removing regulations, opponents argue, ISPs will be free to "catalyze innovation," according to statements from Verizon. And while supporters of net neutrality argue that its reversal will actually minimize competition, its opponents say that it will help boost it -- by way of the freedom to build better networks and charge accordingly for access to them.

“We are helping consumers and promoting competition,” Chairman Pai stated prior to the vote. “Broadband providers will have more incentive to build networks, especially to underserved areas.”

However, this innovation may simply come in the form of the ISPs' freedom to charge more for higher speeds, which potentially holds serious repercussions for businesses that rely on such in order to operate -- and further increases barriers to entry for smaller and emerging companies. That could actually minimize competition, as opposed to the Chairman's arguments, and the higher cost could be passed onto the consumer.

There Was Nothing Wrong With the Internet Prior to Net Neutrality

This one is fairly intuitive. Net neutrality opponents have argued that since the internet worked just fine prior to the 2015 regulations, it will continue to operate normally and satisfactorily without it now.

In a blog post published the day prior to the FCC vote, Comcast Senior Executive Vice President David Cohen wrote that "there is a lot of misinformation that this is the 'end of the world as we know it' for the Internet."

In other words, supporters of net neutrality are overreacting to its repeal -- and should stop treating it as something, in the words of Commissioner Brendan Carr, "apocalyptic."

5. Is net neutrality dead for good?

Not yet, exactly -- here's what happens next.

First, it was discovered that public comments in support of the repeal were fabricated, with plagiarizers leaving pro-reversal comments under the names of people who are no longer alive.

New York State Attorney General Eric Schneiderman has compiled a database that allows users to find out if names of their relatives or loved ones were used in this manner -- as was the case for designer Morgan Knutson. And while these findings alone most likely can't invalidate the FCC's vote, they could support congressional efforts to maintain net neutrality.

And about those efforts: Over a dozen senators, including Brian Schatz of Hawaii and Ed Markey of Massachusetts, are working to present a Congressional Review Act -- the process that allows Congress to counter regulatory rulings from federal agencies -- that would nullify the FCC's vote. It's worth noting, too, that if such an Act did reverse the vote, the FCC would not be able to act to repeal net neutrality again.

In sum, the FCC's vote has carved a very clear, accessible path for the aforementioned changes to become a reality -- but they haven't gone into effect yet.

And as for what the vote means for small-to-midsize businesses, as we mentioned before, there may be repercussions as a result of the potential for more steeply-priced access to the high-speed internet that so many of us rely on. But until these changes actually take effect and regulations are officially dismantled -- pending the Congressional Review Act -- it's too soon to tell.

As always, I'm open to your take on the matter. Feel free to reach out to me with your thoughts and questions on Twitter.

Featured image credit: “We Love Net Neutrality action at Verizon with Light Panels - Photos by Alex Garland” by Backbone Campaign is licensed under CC BY 2.0 / Cropped from original