Here it the fourth installment of one of Facebook's biggest VR events, Oculus Connect. Today, things kick off with an opening keynote from Mark Zuckerberg himself, and we'll be there to bring you the highlights of his thoughts and insights in .

The event comes at an interesting time for Facebook. The company has been under a growing amount of pressure to answer questions about its possible involvement in the 2016 U.S. presidential election, with particularly high scrutiny for how it will prevent such action from being taken again, and how it plans to curb the abuse of its targeted ad and promoted technology.

It also comes on the heels of Zuckerberg's recent live demo of Facebook Spaces, a new feature that allows Oculus Rift users to experience virtual reality environments with friends, no matter where you're using it.

On Monday, Zuckerberg demonstrated the technology by "placing" himself and a colleague in hurricane-ravaged Puerto Rico, doubling the live content as an announcement about Facebook's partnership with the Red Cross for relief efforts -- which was met with mixed results.

The event is scheduled to begin at 10:00 AM Pacific Time. And in addition to this , there will be a live stream. Tune in ASAP, because we’ll be getting started as soon as the lights dim and the dramatic music is cued.

12:10 PM PST: And that's a wrap! We'll be here for the full Oculus Connect experience this week and plan to bring you the greatest insights and takeaways.

11:57 AM PST: One of my favorite intersections: AI and VR. According to the conversation taking place, machine learning is going to be crucial for continuing to create truly immersive VR experiences, which creates a cool overlap of two "buzzy" topics that aren't often discussed together.

11:44 AM PST: For context, Michael Abrash is a Chief Scientist at Oculus and Steven Levy is a long-time tech journalist. It could be argued that both have been present for the evolution of VR from day one, so it makes for an interesting conversation.

But wait -- there's more! We get to hear a chat between Michael Abrash and Steven Levy. pic.twitter.com/ILh1xrL7qT

11:30 AM PST: Many of the items being covered now serve as a reminder that this is, first and foremost, an event for VR developers and designers. The people taking the stage are expressing gratitude for them -- after all, they're chiefly the ones creating the content experienced with Oculus technology.

Jason Rubin, VP of content, takes the stage. These goals listed here were unimaginable, and yet, they were all achieved #oculusconnect pic.twitter.com/WO9uT6WeWF

11:22 AM PST: Part of what this will do is allow users to move on and off of VR spaces more seamlessly. Also, you'll be able to create a 3D object using a Facebook camera, then share it. These objects will "pop" off the screen, too.

11:17 AM PST: What does this mean? Basically, it sounds like a VR experience can be created based on the environment where you are at any given moment. So today, for example, we'll have the option of using 360 video to broadcast and create a Spaces experience from the Oculus Connect showroom floor.

11:08 AM PST: So, here's that accessibility item again. Because a lot of people still don't have a headset, Product Manager Christina Womack says, marketing VR experiences to those who are less entrenched in technology presents a challenge. That's where initiatives around mixed reality come in.

"Marketing VR experiences outside of the headset is really hard." That's where Mixed Reality Capture comes in. pic.twitter.com/d1dcnf3Pq6 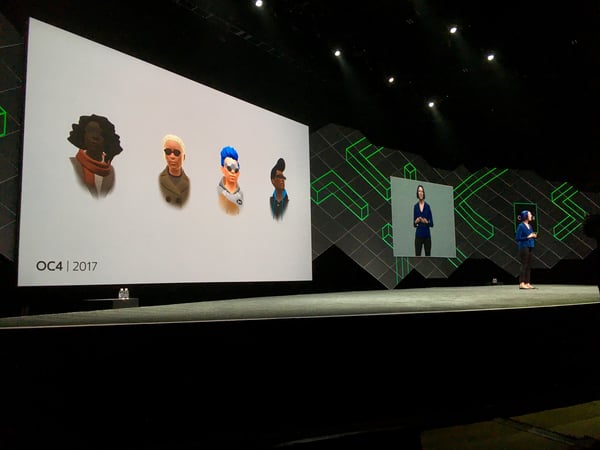 10:53 AM PST: Rift Core 2.0 will be available in beta this December for all Rift users. And, it'll come with Home: an immersive experience that lets users tinker with, well, a home-like setting. It appears to borrow from some AR features that let users tinker with furniture placement -- but in fully immersive VR.

10:42 AM PST: More talk of accessibility, though some of these features -- like Dash, for example -- are less about pricing and geography, and more about a more streamlined Rift experience, like being able to access and use your desktop from within VR.

10:41 AM PST: It sounds like Project Santa Cruz controllers are going to play a part in what will ultimately create an untethered Rift experience: one that doesn't require a PC. Here's a look at them, still in prototype mode. 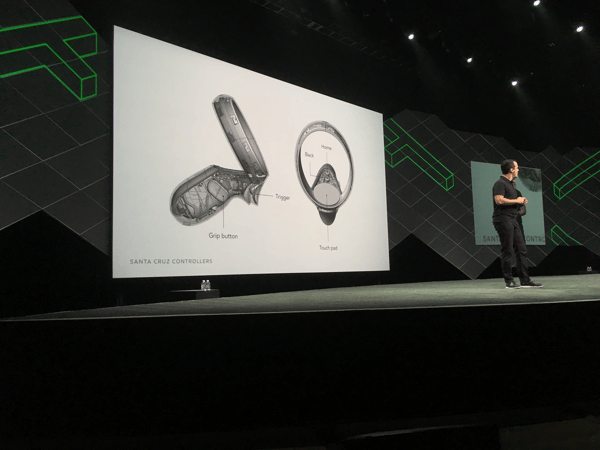 A new permanent price for Rift and Touch: $399, starting today. "The best VR system, now at the best price." #oculusconnect

10:34 AM PST: There's been a demand, apparently, for professional versions of Rift technology. The response is Oculus for business, which comes with a business-specific bundle of products and services.

10:32 AM PST: So, that's the Go. Its biggest selling points: "The most accessible VR experience," Barra says, it's lightweight and comfortable, and has enhanced lenses for a better viewing experience. Now, we're moving onto the Oculus pride and joy: the Rift.

10:26 AM PST: There is a lot of talk of the accessibility of VR so far. That's paired with efforts, Barra says, to "push the envelope" of the types of experiences that will become available with some of the stand-alone headsets. The Go, for example, is designed to work toward that.

10:23 AM PST: Part of the reasoning behind the expanding portfolio of products, Barra explains, is to create a global reach and get VR experiences into the hands of people everywhere.

10:22 AM PST: "What a fantastic thing." That was Barra's Dad's first reaction to his Rift experience. "That is the magic of presence in VR," says Barra.

10:20 AM PST: OC4 is the biggest Oculus Connect event yet, says VP of VR, Hugo Barra. It's also the first one available, he says, to be experienced via VR in 4K.

10:15 AM PST: And that sweet spot between the two, he says, is something that won't tether people to their PCs. The answer: Oculus Go, priced at $199, available "early next year."

10:14 AM PST: Mark Zuckerberg's goal: to have 1 billion people in virtual reality. That requires both affordability and quality.

10:13 AM PST: A new experience called Oculus Venues is coming. It's part of the effort to allow people who can't be physically present at events like to still "attend" them.

10:11 AM PST: There's also the argument that VR will play a major role in the evolving workplace. As more teams become remote/widespread, VR can save money on commutes, but also create a more immersive, collaborative setup.

10:08 AM PST: A case is being made for the inclusive nature of virtual reality, rather than the impression that it's isolating. He uses the example of a woman named Dorothy who is "no longer fit to go on holidays" and uses a Rift to experience new places.

10:04 AM PST: Zuckerberg says, We're all here because we are all legitimately excited about the future, and we all want to make it a reality," but warns not to "start with the mainstream." 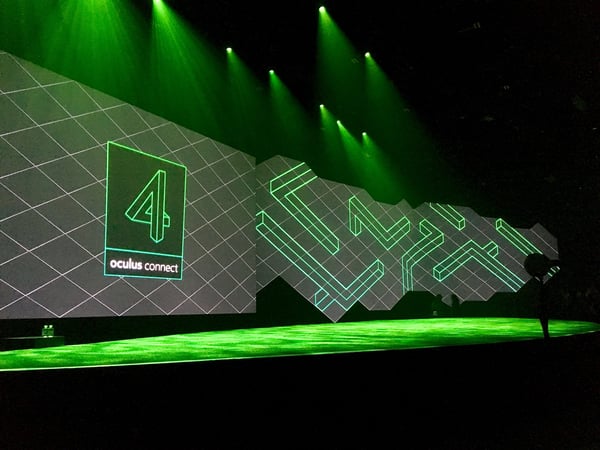 Why This New VR Headset Could Be a Game-Changer