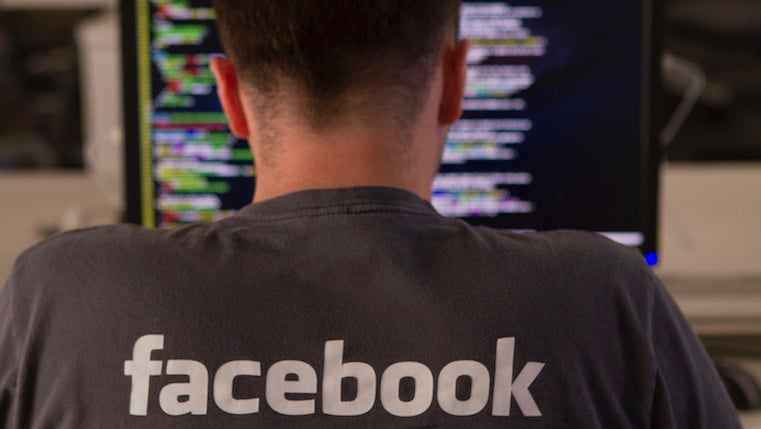 Welcome one, welcome all to Wednesday -- the day that marks not just the week's halfway point, but another edition of "Unriddled": the HubSpot Marketing Blog's mid-week digest of the tech news you need to know.

This week, we continue to wade through the very crowded pool of tech news items to help you decrypt what's happening in this vast, often complex sector.

In the midst of ongoing backlash from the alleged misuse of personal user data, Facebook is earning less trust from Americans than other key players in the Big Tech space, according to a recent Reuters/Ipsos poll.

When asked how much they trust a selection of tech companies to obey data privacy protection laws, 41% of Americans say they trust Facebook, while 51% do not.

Out of the same set of respondents, 66% say they trust Amazon to obey data privacy protection laws, while 62% trust Google. The audience was also asked the same question about Microsoft (60% trust), Apple (53%), and Yahoo (48%).

The poll results, which were released on Sunday, came shortly before the Federal Trade Commission (FTC) confirmed it will be conducting a non-public investigation into Facebook's privacy practices. It's not the social network's first run-in with this particular federal agency -- in 2011, it also had to settle FTC charges after failing to make good on several promises regarding user privacy.

Facebook announced yesterday it would continue to prioritize local news in users' News Feeds: a change that was first announced in while being tested in six U.S. cities.

Now, according to yesterday's announcement, the change will be rolling out "in all countries, in all languages."

The statement, written by Facebook's Head of News Product Alex Hardiman and Head of News Partnerships Campbell Brown, notes these changes to the News Feed algorithm will allow users to see more news "from local sources covering their current city and other cities they may care about."

According to the initial January pilot, a "local" news source is defined by the number of clicks its links by users in a certain geographic area. That means, for a user in a given region, stories from these sources are more likely to appear higher in the News Feed if you follow their Pages, or your friends share content from them.

But with this update, the scope of "local" is a bit more flexible -- and now, "we’ll consider a publisher as local to multiple cities if the people in those cities are more likely than the people outside of those cities to read articles from the publisher’s domain," write Hardiman and Brown.

These changes appear to be part of Facebook's ongoing efforts to emphasize personal-network-focused content in the News Feed. That overarching change to the algorithm was also first announced in January, following initial revelations the network had been weaponized to spread misinformation and divisive content to influence the 2016 U.S. presidential election.

In an email to the company's Southwest Asia staff, Uber CEO Dara Khosrowshahi confirmed that the ride-hailing app would be exiting that region, and selling its shares to its largest competitor there: Grab.

Grab, which describes itself as "O2O mobile platform" (online-to-offline), currently operates across six countries in the region, including Singapore and Thailand. For Uber, this is not the first major international market exit of this nature -- in China, one of its largest geographical competitors, Didi, acquired Uber's business in that country in 2016. And in Europe, Uber merged with Russian competitor Yandex.Taxi last July, ceasing its operations there.

"One of the potential dangers of our global strategy is that we take on too many battles across too many fronts and with too many competitors," wrote Khosrowshahi. "This transaction now puts us in a position to compete with real focus and weight in the core markets where we operate."

Partnering with #grab to create the market leader and bet on @AnthonyPY_Tan and team. Huge thanks to teamUber to get us here and good result for our shareholders and partners. https://t.co/c1ANSp9qjH

To some, those "core markets" are the U.S. and Europe, where SoftBank -- Uber's largest shareholder following a $9.3 billion investment in January -- has verbally stressed it wants the company to focus its efforts.

The deal with Grab will leave Uber with a 27.5% stake in what Khosrowshahi called "the combined company," where roughly 500 Uber employees will be working once the transition is complete.

The news comes on the heels of a fatal incident involving one of Uber's self-driving cars in Arizona last week, which has led to the suspension of autonomous vehicle testing by several manufacturers -- including, according to Recode's Johana Bhuiyan, Toyota Nvidia.

According to Reuters, the new policies will prohibit ads pertaining to both cryptocurrency sales, as well as initial coin offerings (ICO). The rules are said to have rolled out yesterday -- and the following appears on Twitter's Restricted Content Policies for financial services: 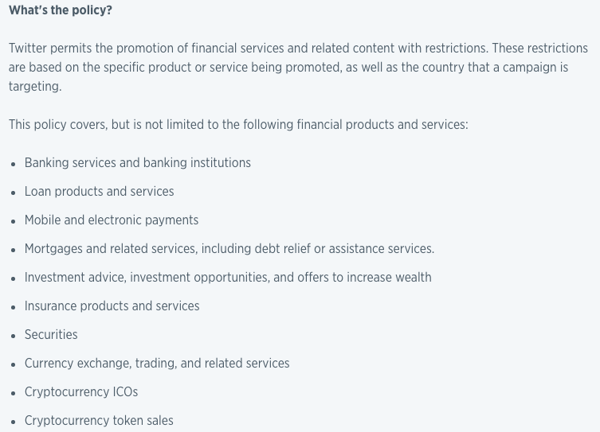 The announcement comes among suspicions that Twitter, as well as Facebook and Google, might be facing government regulation that it has seemingly sought to avoid. Following recent allegations that personal Facebook user data was misused by bad actors, the CEOs of all three companies have been invited to testify before the U.S. Senate Judiciary Committee (Zuckerberg has been asked to appear before two additional congressional committees, as well, and there are reports he has agreed), raising questions about the potential of a federal gatekeeping role in the area of user privacy.

It's also worth noting that the General Data Protection Regulation (GDPR) comes into force this May, which concerns the personal data of EU citizens -- leaving many wondering if a U.S. version might be on the horizon.

At a press event in Chicago yesterday, Apple announced it would be selling a new 9.7-inch iPad at a lower price point with a certain audience in mind: students. The product unveil came ahead of the company's June World Wide Developers Conference.

In keeping with the theme of education -- the event was held at Chicago's Lane Tech high school -- Apple also announced the iPad will be available for $299 for students and schools, compared to $329 for other consumers. It's also designed to work with Apple Pencil: a digital wand that allows users to draw and write on the device screens as they might with a pen.

Before this announcement, the Apple Pencil was only supported by the (pricier) iPad and wasn't included. Instead, it had to be purchased separately for $99. 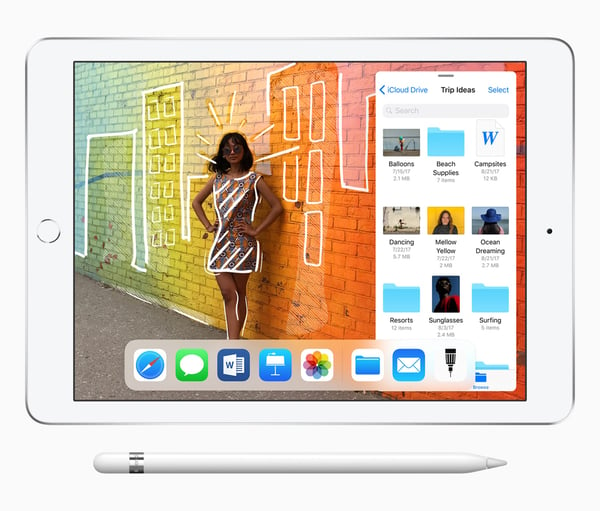 With this newest product release, the Apple Pencil still has to be purchased separately, but it's available at a lower price point for students and schools at $89 (the price point for other consumers is $99). That makes the total combined product cost just shy of $400, or more if users also choose to purchase a keyboard.

Compare that to the very first Chromebook tablet, which was unveiled the day before Apple's event, and is also priced at $329 -- and according to Google's official announcement, it comes with a stylus -- a similar digital pen -- inside the package.

It's also being positioned as a product particularly fitting for the education sector, with the benefits to students outlined in the product launch announcement, including the tablet's augmented reality (AR) capabilities that will allow students to simulate such experiences as looking "into the eye of a miniature Category 5 hurricane or ... a strand of DNA." 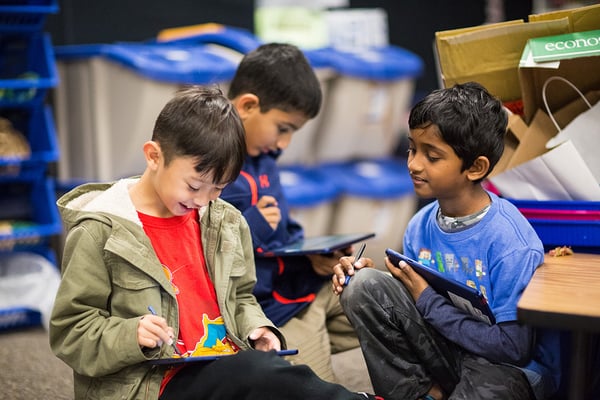 Facebook has announced new privacy tools that are expected to make it easier for users to understand and control their personal data. Here's what to expect. Read full story >>

Facebook has reportedly shelved its plans to unveil an AI-powered smart speaker at its May 2018 F8 developer conference. The plans, and their undefined postponement, come among the growing scrutiny and backlash from the alleged misuse of Facebook personal user data by third-party bad actors. Read full story >>

What, exactly, does Cambridge Analytica know about me -- and what does it mean for Facebook and its users? To find out, I downloaded my Facebook data, and it got very weird, very quickly. Here's what it contains, and what it all means. Read full story >>

Yesterday, unconfirmed reports Mark Zuckerberg will testify before Congress were swirling, aligning closely with the announcement he will not agree to requests to do so from Damian Collins, the U.K. Parliament's media committee chair (Facebook says Chief Technology Officer, Mike Schroepfer, or Chief Product Officer, Chris Cox would appear instead). Zuckerberg has been invited to appear by three congressional committees, but it is not yet clear which he will answer to. Read full story >>

Since Instagram changed its algorithm to stray from chronological order in 2016, some users have been displeased. Last week, the app announced that could change, with the possible introduction of a "New Posts" feature and more. The announcement came among rumors the app would be emulating more Snapchat-like features, including code scanning. Read full story >>

Why Are We So Infatuated With Bots?

Bots are not a new concept. But, as they permeate pop culture, customer service, and more, our obsession with them grows. So, why are we so intrigued by them? Read full story >>