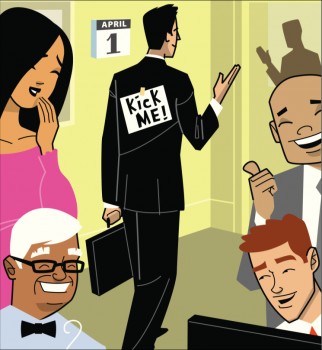 April Fools' Day is upon us once again. Companies everywhere will postpone their daily tasks to partake in the tomfoolery that is April 1st.

If this year is anything like the last few years, we can expect a lot of product releases, update announcements, and a multitude of elaborate pranks from Google.

Of course, nothing of substance is usually announced on April Fools’ Day. No one wants to take the risk of announcing a new product or a major update to highly suspicious consumers hoping to avoid being fools. That said, April 1st pranks can be a great way for companies to drive traffic to their sites and to create buzz about their brands.

In this post, you'll find a compilation of some of our favorite April Fools’ Day pranks from recent years. Find them funny? Just click the share links below each to spread the laughter over Twitter.

Toshiba announced a spherical game console with no controllers or cameras. Instead, the console uses infrared motion detectors to capture gamers every move. “Gaming so real, it’s unreal.”

An obvious play on the Google Goggle concept, Guardian goggles let you take The Guardian with you everywhere you go because “life’s too short to think for yourself.”

Last year, we also created a spoof of Google Glass with SprocketVision, designed to help you identify, nurture, and convert prospects in the real world, in real time.

HEX designed a seamless and fashionable case for one of the digital essentials of our lives, the Apple Newton PDA, of course. Great for fashionistas and tech lovers alike.

Sony introduced the lightest, most compact device ever made with the VAIO Q Ultrabook.

The initial goal of YouTube was to find the best video ever created.  As a result, YouTube announced that the site would be shutting down for 10 years to begin the process of selecting the winner. In 2023, YouTube claimed the site would go back online to feature the winner, and nothing else.

Check out some of the categories here, via Huffington Post.

YouTube announced that they would be offering the delivery of all YouTube videos ever in DVD form, organized by genres ... all 70 hours of video uploaded every minute since 2005 on DVDs.

Twitter released a statement that informed the Twittersphere that all users would now have to pay $5 per month if they wanted to use vowels in their tweets.

Conan created a video that announced his hostile takeover of Mashable because he was tired of the "atrocious job they were doing."

That's right -- your favorite coffee cups were supposedly going to release additional flavors that had nothing to do with coffee at all. Simply insert the K-Cup and receive a meal instantly.

Google Pranks ... A Category All Its Own

Google has been the king of April Fools' jokes in recent years, often carrying out multiple well-executed pranks on what seems to be one of the search giant's favorite days of the year.

Google Jobs - Being an Autocompleter

Have you ever wondered how Google is able to finish your search queries and correct your spelling errors for you? As Google shows in this video, they have highly capable autocompleters -- of course.

In 2012, Google claimed that they found treasure maps with encrypted symbols and codes. Google announced that they were going to release the map to the world so their users could help the Google team crack the code and find the long lost treasure.

Google Nose Beta was created to continue to provide Google users with exactly what they're looking for. Due to their "mobile aroma indexing program," Google Nose promised to connect search with smells for the first time ever. "The roses are now just a click away."

After 6 long years, Google finally finished the technology to allow for Gmail Blue. Inspired by nature, "It's Gmail, only bluer."

What are some of your favorite April Fools' Day pranks from recent years? Share them below in the comments section, we'd love to see them.