When I started selling HubSpot software in 2007, no one had ever heard of inbound sales and marketing. When I spoke with business owners, I had to explain what these concepts were and how they worked. 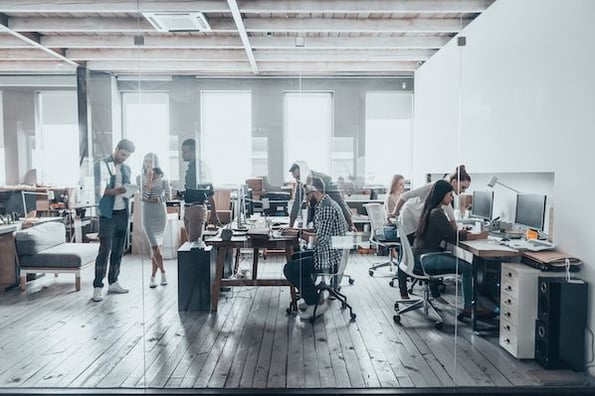 Because HubSpot provided a solution that was completely unique in the market, we had no competition from other companies selling the idea of inbound. As the exclusive provider of inbound software, we were able to scale the company quickly from several hundred to several thousand customers.

It wasn’t until two or three years later other software companies began offering technical solutions for inbound. But by that time, we had a sizable lead in the market.

This kind of head start has a name: first-mover advantage. But what is it, exactly?

What is the first-mover advantage?

The first-mover advantage describes companies that are first to market, which gives them a competitive advantage over other companies, resources, or technologies that follow. Brand leadership and loyalty are usually awarded to first movers, but they must continue to evolve to avoid being surpassed by competitors.

Having the first-mover advantage in your vertical can make you a leader in new technology, knowledge sharing, and cost. And patents and copyrights can ensure certain of these advantages are untouchable by future competitors.

First movers also have the gift of capturing consumer attention, mindshare, and brand loyalty before competitors arise. So, what are some real-life examples of the first-mover advantage? Here are a few of my favorites.

The first soda syrups started showing up around 1881. But when Coca-Cola debuted in 1886, they immediately became the consumer favorite. By the time Pepsi launched, in 1898, Coke was already selling a million gallons per year.

Pepsi went bankrupt twice and rebranded in the 1950s to keep up with their rival. And in the 1960s, they merged with Frito Lay giving Pepsi a successful market share in snack foods, a boost in stocks, and the lifeline they needed to compete. But Coke’s biggest beverage brands have reached more than $1 billion in sales -- something Pepsi has never quite been able top.

In 1863, James Caleb Jackson created a graham flour dough breakfast cereal called granula. He was first to market, but never captured much consumer attention. Surgeon John Harvey Kellogg made a similar version, called granola, shortly after. But it wasn’t until he and his younger brother debuted Corn Flakes, added sugar, and began mass-marketing that their brand really started to take off and they captured the first-mover advantage.

While Post and Quaker Oats created similar cereals, none of them could catch up to the brand affinity and popularity of Kellogg’s. After WWII, Frosted Flakes, Tony the Tiger, and television advertising further cemented their status as the favorite cereal brand.

Their 2000 acquisition of Kashi allowed Kellogg’s to evolve with the natural and organic food boom -- key to maintaining their popularity as a brand.

When Apple unveiled the first iPhone in 2007, they changed the mobile phone landscape for the first time -- and they changed it for good. In 2008, HTC became the first manufacturer to make Android devices and other brands followed.

While Apple’s iOS and Google’s Android operating systems still have closely aligned loyalty rates (a recent Consumer Intelligence Research Partners report has Apple’s iOS loyalty rate topping out at 88% and Android’s at 91%) Android loses more users every year (112 million vs. Apple’s 30 million). This allows Apple to maintain their status as the original and most preferred smartphone on the market today.

Remember when Amazon only sold books? They became the first major online bookseller and a force longtime brick-and-mortar stalwarts like Barnes & Noble and Borders couldn’t keep up with.

Ironically, Amazon has even encroached on Barnes & Noble’s physical store stronghold over the past few years. Fast shipping, an increasing number of Prime members, and low prices have powered Amazon to seemingly unbeatable market share.

By the time it burst onto the scene in 2009, Uber was not the first ridesharing company, but it was the largest and most successful, beating out pioneer Sidecar for eventual market domination.

Debuting in 2012, Lyft became Uber’s most ferocious competitor. But even a damaging year of scandal in 2016 -- which saw them lose their founder and CEO and weather the “Delete Uber” campaign -- didn’t dilute Uber’s market share too much. USA Today reports 48 million people will ride Uber in 2018 to Lyft’s 29.9 million riders.

Two years of Kindle brand loyalty managed to overcome an initial market share grab by Barnes & Noble, which has lost $1.3 billion on Nook in the last six years.

Founded in 1995, eBay managed to survive the dot-com bubble and do the unthinkable -- withstand Amazon’s online auction spinoff, “Amazon Auction.”

Acquisitions of companies including iBazar and PayPal, and the 2009 sale of Skype, have helped it maintain market relevancy and dominance. It’s still the world’s largest online auction site, with 175 million active users in 2018.

The first-mover disadvantage refers to the pitfalls of being a company that’s first to market. Second-movers can learn from first-mover’s mistakes, reverse-engineer new products, and benefit from a marketplace of buyers the first-mover has researched and educated.

These once-powerful pioneers break down the myth that first to market is always strongest or best. They also serve as cautionary tales for first-movers.

While being first to market might give entrepreneurs the ability to establish their product/service as the industry standard and make a strong first impression on consumers and future competitors alike, it’s important to keep an eye on those who follow.

Maintaining open lines of communication and an always evolving product can help you hold onto your advantage and build a blue chip brand that’s almost impossible to beat.