Just like every scientific activity requires a process, so does sales. And while there are umpteen versions of sales processes you can follow, the biggest challenge in sales management from my perspective is not figuring out which process to use, but to ensure that your team actually follows it.

At Talview, along with the responsibility of being the CEO, I also managed the sales team for more than a year. We invested in one of the best CRMs to help us keep the process on track and get the right insights. The CRM supported email and calendar integration and connected to our website and landing pages. This essentially meant that the sales team received their qualified leads inside the CRM and all their email and meeting activities were automatically updated in the system.

In the CRM, the sales process was six steps long:

We had periodic refresher trainings on this process to keep the team’s memory fresh.

However, in spite of the various mechanisms in place to reinforce the process we faced two big challenges.

First, the average salesperson was following only about 40-50% of process as defined. While the six stages were sacrosanct, the movement between them was often overlooked or misunderstood. Common problems included:

Such mistakes lowered the quality of the funnel, and meant that projections were usually off the mark.

Second, it was difficult for me to objectively review the process followed by the team. I can’t count how many times I was convinced in my role as de facto sales manager to overlook missing steps because the salesperson was so “extremely confident” about the deal. I heard very strong arguments on why the product was an absolute must for the client right now -- even if they hadn’t seen a demo, or if the point of contact was an entry-level executive.

By design, salespeople, like entrepreneurs, are eternal optimists. That is what keeps them going in face of rejections and failures. They genuinely want to close the deal and take home the commission. However, the prevalence of skipped steps made it all but impossible to realistically evaluate how well the process was working.

How Do You Get Salespeople to Follow the Sales Process?

I thought long and hard about how to overcome these problems -- but as it turned out, some of the proposed “solutions” became challenges in and of themselves.

First, we tried adding even more steps to the sales process in the CRM so that the salespeople never left a crucial stage out. For example, we added Legal Approval between Proposal and Deal Closure, and a Pilot Report Discussion between Pilot and Proposal.

Instead of being more faithful to the process, this resulted in the salespeople skipping the CRM altogether! I heard many complaints about lack of time in regard to entering the information in the system. It also made tracking and projections even more cumbersome because now we had double the number of stages.

Next, we tried offering more frequent refresher trainings on the sales process. But it wasn’t long before the reps were complaining about the time cost of training, and used that as an excuse for slow sales. In addition, they felt the trainings were repetitive, boring, and not valuable.

After these two dead ends, we realized the challenge was not lack of know-how of the process. Instead, it was more about the difficulty of thinking clearly with all the action happening on the sales floor. The ultimate solution had to save them time -- not add it.

Then I thought of something which was very simple but could be effective: A quick reference poster that visually displayed each step in the sales process. We printed the poster and put it up in the sales bay. 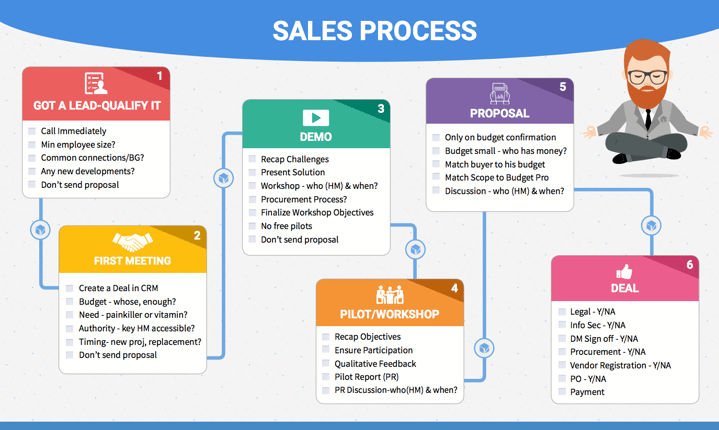 Even though I was skeptical -- how could the answer be something this simple? -- it worked for both the team and me as their manager.

For the team, it acted as an easy reminder of what they were supposed to do. For every lead that came in, the reps would glance at the poster. It took just two seconds, but those two seconds gave them significantly more clarity on what they needed to achieve on the call or meeting. It also helped them more accurately determine if each deal was ready to move into the next stage, or if something critical was missing.

And as for me, the poster helped me do more meaningful reviews. I could refer to it on the sales floor while doing a quick check on key deals and easily figure out if something had been left out.

Our review meetings also became a lot more structured because everyone had the poster in the backdrop to refer to. Now, when a rep tried to tell me that a new lead would close in two weeks even though our average sales cycle was two months, I followed up by asking how X or Y stage would happen in less than two weeks. If they didn’t have an answer, they didn’t have a deal.

How You Can Create a Sales Process Poster

The biggest reason the poster worked is because of its simple design. We made at least three iterations before we finally agreed on the final product.

So how did we come up with what actually ended up on the page? Before anything else, we did a quick analysis of all the key characteristics and activities that made a deal successful.

When looking at 100 deals from the last six months, patterns quickly emerged. For example, in more than 80% of successful deals, the metrics of success were clearly defined before the pilot -- usually by the clients themselves. So we worked in a Proof of Concept Document stage before the pilot.

Similarly, we found that if deal was of a certain value or above, we typically had to go through Info Security approval. With this in mind, we required salespeople to indicate in the CRM whether Info Security Approval is applicable or not. If so, they would have to secure that commitment, denoted by another stage.

If you are trying to create your own poster, start by mapping out each and every activity you did in a particular stage for successful deals and try to spot patterns. Then, work the critical steps into your sales process, and create an easy visual reference.

How do you get salespeople to stick to the sales process? Share your thoughts in the comments.

How to Be a Good Car Salesperson

9 Steps to Create a Facebook Sales Funnel That Converts