7 Confidence-Killing Habits to Avoid in Sales 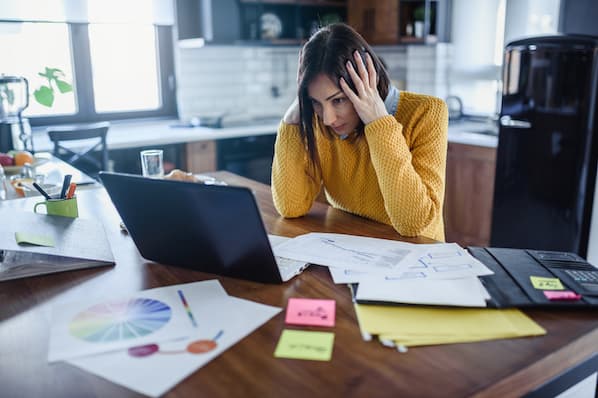 Think of an experience you had when you were trying to make a purchase, and the salesperson helping you lacked confidence.

Perhaps they weren’t sure of the product’s features. Or maybe they didn’t do a good job explaining how their product can help you solve your problem, because they didn’t understand what you were looking for.

Confidence is a key differentiator between reps who meet or exceed their goals, and those who struggle to gain momentum. Let’s talk about why that is.

Why Confidence Is Critical in Sales

Prospects take their cues from salespeople. If the rep sounds calm, collected, and self-possessed, prospects instinctively trust them more. But if the salesperson communicates uncertainty, timidity, or nervousness, prospects doubt their credibility — and consequently, the product’s ability to meet their needs.

It’s all too easy to seem unsure. If salespeople want to gain the buyer’s trust, they should avoid these seven habits.

To avoid appearing like a pushover, salespeople should limit how often they apologize. Saying "I’m sorry" for trivial mistakes or scenarios that aren’t the rep’s fault makes them seem anxious and insecure

This habit also lessens the impact and weight of a real apology. As a result, reps have a harder time convincing buyers of their remorse when they do mess up.

Every time a salesperson is tempted to apologize, he should ask himself, "Am I saying sorry for something out of my control? Will/did this significantly inconvenience my prospect? Would I expect an apology if the situation was reversed?"

He should only apologize if the answer to all three questions is "yes."

Here are some sample situations in which a rep should -- and shouldn’t -- say sorry:

"Um," "like, "uh," "you know," and other filler words slowly but surely chip away at a salesperson’s credibility. According to a study published in the Journal of Nonverbal Behavior, frequent "ummers" seem "uncomfortable, inarticulate, uninteresting, ill-prepared, nervous, disfluent, unattractive, monotonous, unsophisticated, and lacking confidence."

The most effective way reps can cut out filler words? Paying attention to what they say. Author and leadership expert Selena Rezvani recommends listening to a call or meeting recording and noting how often verbal crutches pop up. Once salespeople know which filler words they’re apt to use, it’ll be easier to filter them out.

Reps should also give themselves permission to pause. Silence might feel unnatural, but it sounds perfectly normal to the listener. Taking a breath while they think makes salespeople seem far more poised than saying "um" or "ah."

Although offering genuine praise helps salespeople connect with their prospects, complimenting them too frequently usually come across as obsequious. Reps should only offer a positive opinion when a seller asks for feedback.

Prospect: "Our customer engagement increased by 200% in two months."

Rep: "That’s really impressive. How did you accomplish that?"

Prospect: "Our customer engagement increased by 200% in two months."

Rep: "How did you accomplish that?"

As you can see, removing the unnecessary compliment makes the salesperson sound more assertive. They also avoid making assumptions: Maybe the prospect was trying to quadruple customer engagement, and considers merely doubling it a failure.

Some reps start using an overly chipper, high-pitched voice as soon as they pick up the phone. Not only does the "game show voice" grate on buyers’ ears, it also lessens the rep’s aura of confidence. If the product is as great as the salesperson says, why are they overcompensating with their voice?

Fortunately, the fix is simple: Salespeople should speak to prospects in their normal voices. They’ll seem more self-assured and genuine, and they’ll put prospects at ease by making the interaction feel friendly and informal rather than forced.

Reps who frequently slip into "sales mode" should keep themselves in check by imagining they’re calling a friend rather than a potential customer.

If the call is going well, it’s tempting to go over the allotted time. But Jeff Hoffman, creator of the YourSalesMBA™ training program, argues this is a mistake.

"You want to let your prospect know that your time is valuable," he explains. "You can easily demonstrate this fact by owning your calendar."

Hoffman advises reps to "enforce a hard stop" for their meetings. If the conversation is progressing quickly, propose another meeting soon -- as early as later that day.

For instance, a rep might say, "I have another call at 10:30. Are you available this afternoon at 3 p.m. to continue this discussion?"

This isn’t a hard and fast rule. Salespeople should stay on the line if they’ve had a difficult time getting this prospect on the phone or if the prospect seems like they’re about to buy. It’s also a good idea to extend the call if they’re midway through a delicate or sensitive conversation.

Some things in life can be easily improvised. Your sales calls and pitches should not be included in this category.

Being prepared to walk into a sales conversation is a must for building confidence. When you try to wing your sales pitch without doing your homework on the prospect, their concerns, or potential objectives they may have, you put yourself in a position to get caught off guard when they raise an objection or ask a question you weren’t prepared to address.

To keep your confidence in check, do your best to avoid being caught off-guard by the prospect during the sales process — and the best way to do so is to make sure you’re adequately prepared for every conversation.

7. Not Building Rapport with Your Prospects

Some reps are so intent on following their script and getting through their pitch they forget to stop and actually listen to what their prospects are telling them. This is a huge mistake, because your ability to listen and relate to your reps is critical for relationship-building.

During your calls, allow time and space for fluidity in the conversation so the buyer can ask questions, share details of their situation, and express concerns. Though it may be tempting to bulldoze the conversation in an attempt to talk the prospect into buying, giving them time and space to speak, and actually listening to what they have to say shows you’re willing to build a genuine connection with them, and have the confidence to bring the sale to fruition even if you can’t control the conversation.

Once salespeople have stamped out these five habits, they’ll see prospects putting more faith in them. Buyers are often stressed, overwhelmed, and nervous: After all, they’re trying to figure out how to resolve a pressing need or problem. Salespeople can put them at ease by taking on a trusted advisor role.

5 Psychology-Backed Exercises That Will Make You Feel More Confident