Stalled Negotiations: Why They Happen & 4 Tactics to Handle Them 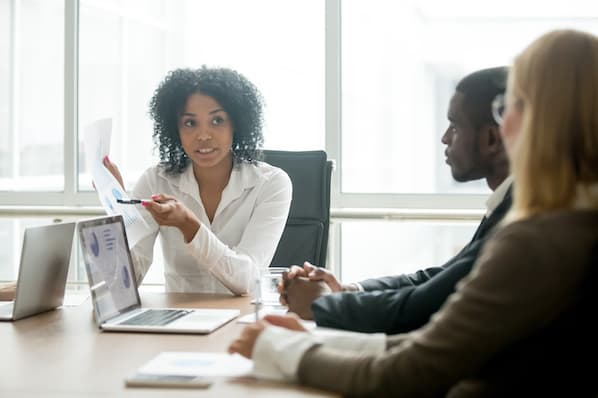 Some deals are slam dunks and others just aren't meant to be, but every now and then, a negotiation lands somewhere in the middle and plateaus for a while — and knowing how to navigate those kinds of stalled negotiations serves anyone expected to engage with finicky prospects.

Here, we'll take a closer look at why deals stall and review some stalled negotiation tactics you can leverage to keep your deals moving.

'Stalled sales' is a relatively loose term that typically refers to deals where a prospect is reluctant to continue negotiating. In these instances, a prospect might be difficult to reach, offer obviously inaccurate answers to your inquiries, or refuse to complete next steps.

Negotiating is a delicate art. Prospects can be picky and unpredictable — and there's no single, definitive reason why one might pump the brakes on a potential deal. Still, some common themes tend to pop up when reluctant negotiators decide to take a step back.

Why do deals stall?

A deal only goes as far as the momentum behind it will take it. If there's no pressing need for your prospect to buy, they'll be less inclined to prioritize your deal — stalling negotiations and making the process that much more painstaking and frustrating for you.

You haven't been talking with the right stakeholders.

There's a chance that you'll touch base with contacts at companies who have varying degrees of influence and decision-making authority. That means you might wind up sinking considerable time and effort into a negotiation with a company representative who needs to touch base with higher-ups before they can buy.

Your contact is waiting on more information from within their organization.

In a similar vein to the point above, you might wind up corresponding with a contact at a company who doesn't have the full picture of their company's position in the negotiation. They might not know all of the details about key information like budget, approval for a solution like yours, or any other necessary context that can frame a productive conversation with you.

You haven't built enough trust with your prospect.

At its core, sales is the process of developing and capitalizing on immediate trust with prospects. If they're not sold on you, they won't buy from you. Sometimes, your prospect might still be feeling you or your business out by the time you're ready to close. In those cases, your deal is almost bound to stall. 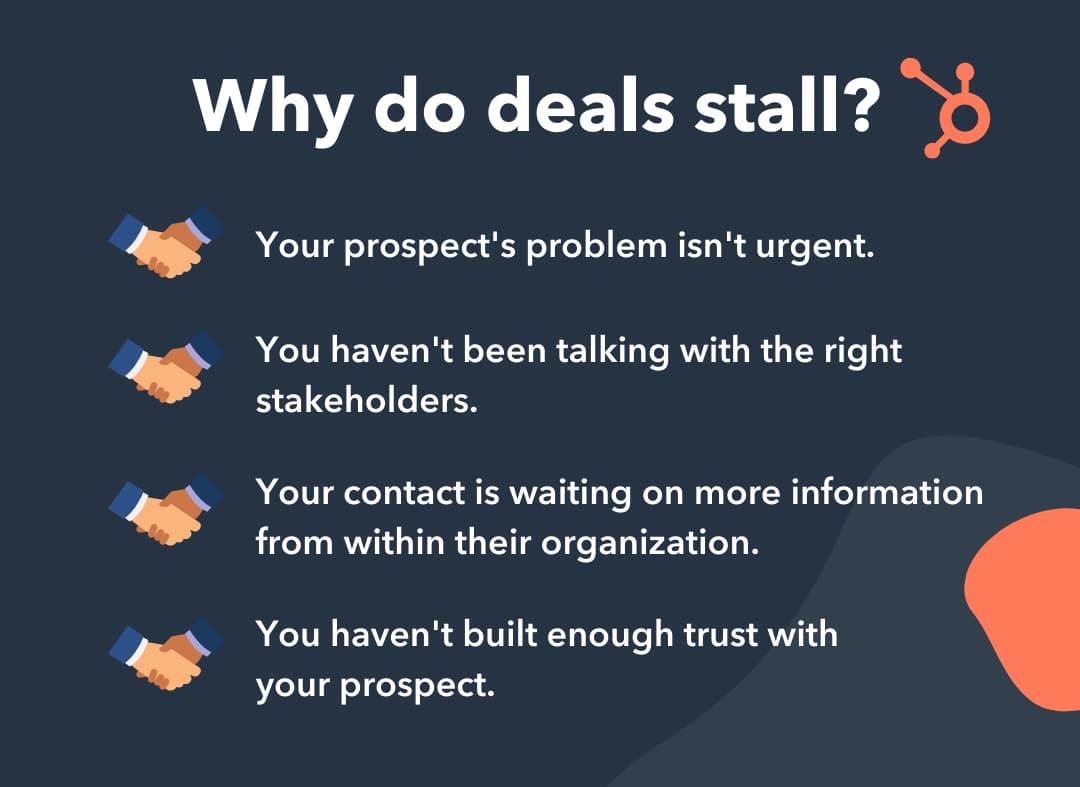 Prospects often stall negotiations when they struggle to see the merit in your solution. As a deal progresses, they might start looking into similar products or services or begin believing that their need for your solution might not be as pressing as they'd initially assumed.

In those cases, you might need to find a new angle and reframe your value proposition accordingly. For instance, let's say you've been pushing increased revenue as the main selling point for your solution in a negotiation — only to find that your prospect's interest in that benefit is waning.

In that case, you might want to reframe your product's value from an exceptional revenue driver to a solid efficiency booster. You'd shift from a "You can expect to see an X increase in gross revenue from Y channel" angle to something like, "Our solution has been known to nearly double productivity from individual engineers in just X months."

Sometimes, a prospect gets skittish as a deal approaches the finish line, and they lose some faith in your solution. As we touched on earlier, trust is central to any successful sales effort — and trust can be delicate.

When your prospect gets cold feet, they might need some reassurance to end the negotiation productively. One of the better ways to set them at ease is leveraging social proof — show them that their peers have seen success with your solution.

Passing along collateral like case studies, press mentions, positive third-party reviews, testimonials from influencers, or names of prominent companies who use your product or service can often be enough to set stalled negotiations in motion again.

Negotiations can put virtually any prospect on edge. They can be contentious, confusing, and stressful at points — especially if the purchase is particularly high stakes. Naturally, the strain a tough negotiation puts on a prospect can often stop a deal in its tracks.

Cushioning the perceived risk associated with a deal is one of the more effective ways to set a prospect at ease and keep deals moving. "Risk reversal" language — reminders that prospects have the option to opt out, get a refund, or request support as a deal progresses — can take some stress out of a negotiation.

Some examples of this kind of language include:

Keeping prospects relaxed and comfortable is often enough to keep a negotiation fluid and productive — using "risk reversal" language is one of the better ways to get there.

Flex your selling muscles. Start every deal by closing for a phone number, an intro, or a meeting. This introduces the idea of the customer saying yes to you. Once you've made a small "sale," move on to bigger asks like asking to speak with a decision-maker.

Stalled negotiations can be major headaches, but they're hardly ever insurmountable. If you know the proper tactics, remain patient, stay persistent, and approach these situations with the right disposition, you'll be able to consistently bring seemingly dead deals back to life.

How to Close a Sales Deal on the Phone: 9 Steps