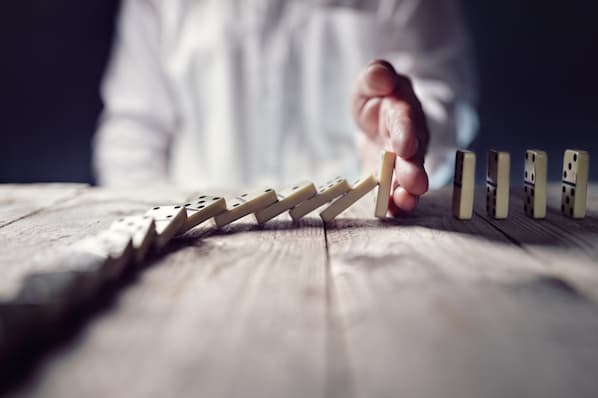 Humans are wired to avoid negative experiences. And for most of us, saying “no” is a negative experience. As salespeople, we see this every day with our prospects. Call it objections, going dark, or just plain ghosting -- but really, it’s your prospect trying to avoid telling you they’re not that into your product/service.

How to Tell They Want to Say No

In sales, you want to get the “no” as soon as possible so you can move on. Otherwise, your prospect might drag you along for weeks or months without giving a definitive answer. I call this “Hope Island,” and it usually sounds like:

When I hear those phrases I know I’m screwed. I don’t want to stay on Hope Island and keep calling even though they’re probably not interested.

This also happens when I’m setting next steps after presentations. Instead of saying “We’re not interested right now,” which would be ideal, you’ll hear “We’ll think about it and get back to you,” “Let’s follow up in two weeks,” or the dreaded “Oh, that’s pricey but it could work.” These phrases tell me it’s time to try Negative Reverse Selling.

What is Negative Reverse Selling?

Negative Reverse Selling comes from the Sandler Sales Methodology. It’s a methodology to use in situations you just can’t beat. When I’m faced with a prospect who won’t tell me no, I use Sandler’s Negative Reverse.

A word of warning here: It’s easy to misuse this technique, which will make you seem rude. Apply it selectively -- and diplomatically -- making sure you never use it with someone when there's no chance of positively progressing your deal.

Negative Reverse Selling comes from Sandler's Reverse Selling. Reverse Selling is a strategy of responding to your prospect's question with another question. A rep does this three times, to better understand the prospect's motivations or needs. For example, if a prospect asks, 'Could I have a discount?' the rep would respond with, 'What price did you have in mind?'

You want to call out your prospect’s lack of interest and get them to admit the answer is “No” without going too negative. Essentially, you’re getting them to realize they’re bullshitting you. Here’s the formula:

Salesperson: “Typically when I hear someone say XYZ, it really means ABC. Is it fair for me to assume that’s the case?”

That’s it. This single framework saves me countless hours. “Is it fair for me to assume that’s the case?” gently pushes prospects into giving a more honest answer about their interest in my product.

How to Use It

Let’s get more specific about use cases. If you’re scheduled to provide a demo for your prospect and his colleagues, but he cancels and says, “I’ll talk it over with my team and get back to you,” here’s how you might respond:

Salesperson: “I get it Sam, but we were supposed to all meet together for a demo. Typically, when this happens it means you might not be interested in our product. Is it fair for me to assume that’s the case, or do you really need to run this over with your team?”

Prospect Sam: “Actually, this is out of our budget right now.”

You’ve pushed back on Sam’s fluffy response and asked for a specific answer. In this case, he was honest about budget constraints.

From there, you can agree to touch base in six months or when Sam has more budget. Either way, you’re able to move on to other deals, and Sam can get back to his work without worrying about the next time you’ll call.

If you use this approach, be ready for a few prospects to get angry. They still don’t want to tell you no, so some prospects will lash out. Here’s an example:

Prospect Sam: “I’m headed into a meeting; can you give me a call next week?”

Salesperson: “Sam, I’ve tried to connect a few times now. Typically, when this happens, it means this is a low priority for you at the moment. Is it fair for me to assume that’s the case?”

Prospect Sam: “Well if you don’t want to talk to me, then I’d rather not do business with you.”

Salesperson: “Hey Sam, my apologies. I do want to talk, but I feel like I’m driving you crazy here with all these voicemails and missed calls. I’d hate to keep bothering you if it’s not necessary. It might be best if you reach out when it’s a better time.”

This last line is important. You need to be clear that you’re keeping the conversation positive and centered around your prospect’s well-being.

It should never feel like you’re taking revenge on an uninterested prospect by saying, “You always say you’ll call me back, Sam,” which turns the conversation into an accusation and, sometimes, an argument.

By keeping things constructive, you’ve put the negativity on yourself instead of on the prospect. It’s important to stay professional and remember you’re speaking to your prospect in a way they’re not used to hearing from salespeople.

In the conversation above, I would leave Sam my contact information and reiterate that I’d love to open the conversation when it’s a priority for him. This way, I’m no longer caught in the hamster wheel of calling and hoping Sam will suddenly become interested.

How to Get Started

When I first learned about the negative reverse approach, I thought “If anyone talked to me like that, I’d hang up immediately.” But I had one vague response I could never get past with my prospects.

At the time, I was working for a software company that offered a free trial of their product. The product was customizable and required prospects to work closely with me throughout the trial process.

All too often, I’d meet with prospects once and hear “I’m going to test this out and get back to you.” Of course I never heard from them again, because they hadn’t worked with me to properly test the product.

I made email templates and scripts, I practiced endlessly -- and still, I couldn’t overcome this objection. My prospects would go dark and I’d spend hours following up without success.

I was desperate for something to help me break through this situation, so I finally tried the negative reverse approach. When a prospect hit me with “I’m going to test this out,” I replied with, “Typically, when folks tell me they’ll test it out and get back to me, it’s not a priority right now. Is it fair for me to assume that’s the case?” The result was that about 75% of these prospects admitted they had no interest in a solution.

When I train reps on how to use this approach today, I stress the importance of using it delicately. It’s not a catch-all tactic or one you should build your sales strategy around. It should only be applied when nothing else works and you’re faced with exile on Hope Island.

Pick the one situation you keep getting stuck on. You know -- that objection they always go dark after using. If you repeatedly have prospects who schedule a meeting, cancel, push it back two weeks, and cancel again, implement the negative reverse approach there.

And get comfortable using it before applying it to other objections or roadblocks. Before you know it, you’ll be using it instinctively when faced with one of those fluffy “maybe” answers.

As salespeople, sometimes we have to force the hard conversations and save both sides valuable time. Use the negative reverse strategy, and turn “Maybe” into “Yes” or “No” before two-week follow-up calls eat away at your calendar and quota.

How Enterprise Sales Differs from SMB and Mid-market Sales

The Key to Customer Centric Selling (& 12 Other Sales Methodologies), According to Sales Leaders

10 Sales Tactics Brands Should Avoid This Year, According to Experts