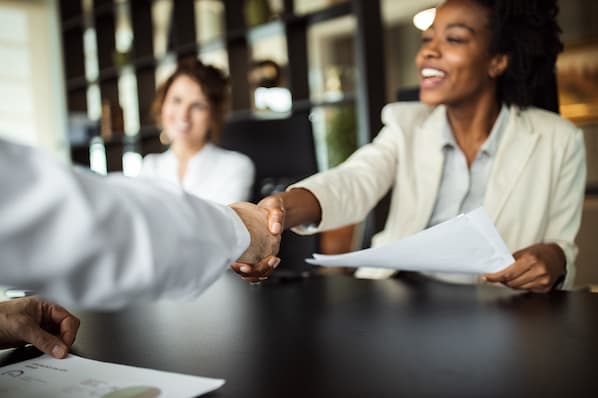 If you asked most people what activity they associated most with sales, I’d guess that many — if not almost all — of them would say, "Closing." It's the endgame for virtually every workable sales process, but despite closing's prominence, being an effective sales closer isn't particularly intuitive.

Closing requires a lot of thinking on your feet, patience, preparation, good sense, and experience — if you want to do it right. Here, we'll take a look at some habits you can embrace, strategies you can leverage, and mindsets you can adopt to consistently close and see the results you're after.

What is a sales closer?

They know the close starts right at the beginning of the sale. They know that a close goes both ways. They create genuine urgency. They get buy-in on each step before moving to the next one. They define their prospects’ decision criteria early on. They define their prospects’ purchase process. They bring in all stakeholders before negotiation starts. They know how and when to stay patient. They know when to ask for the business. They know their bottom line. They close multiple times during the sales process. They communicate clearly and concisely. They stay positive and professional.

1. They know the close starts right at the beginning of the sale.

Good closers understand that the sales process doesn’t just involve one close. It's an ongoing process that underscores the sale as a whole — you're closing a prospect from the first conversation you have with them.

Exceptional closers understand their buyers' goals, plans, and challenges — and they leverage that knowledge to position their solutions as the most compelling options their prospects have from day one.

2. They know that a close goes both ways.

The best closers don’t get lost throwing information, technical jargon, and figures at their prospects — hoping most of it sticks enough to land a deal. That approach is far too one-sided. Instead, great closers work with prospects to ensure that a sale is mutually beneficial.

For instance, when the time comes to talk about pricing and implementation, exceptional closers tend to already have the context they need to make a compelling recommendation.

That comes from working closely with their prospects and maintaining an active back-and-forth as a deal progresses — giving them a leg up when it comes to understanding and conveying what will work best for their buyers.

Salespeople who reliably close never rely on the promise of a discount to get the deal over the finish line. Pricing should never be the main reason to buy right now — as opposed to next week, month, or year. Great closers find a legitimate, pressing issue or opportunity related to their offerings.

They start by helping a prospect understand that it's in their best interest to purchase as soon as possible. They know they can work with that buyer to figure out the exact terms after — and if they do it right, those terms won't include a discount.

4. They get buy-in on each step before moving to the next one.

Great closers never risk their time by making assumptions. They check to make sure they’re aligned with their prospect before moving on to another discussion at every step in their sales process. That way, their ultimate close — asking for the business — is much more likely to have a positive outcome, as it becomes a natural next step in the process.

5. They define their prospects’ decision criteria early on

Surprises and sales tend not to mix well — in that context, they’re often a result of insufficient due diligence. The best closers make it a priority to understand everything a prospect is evaluating as early on as possible, so they can provide value in these areas throughout the sales process.

They never reach what they believe to be the end of a sales process — only to suddenly learn that the buyer has three major concerns they never considered or addressed earlier on.

6. They define their prospects’ purchase process.

Is there a legal review process that will add one to two weeks to the sales process? Is your prospect required to evaluate a certain number of vendors (as government agencies often are)? Are there other procurement process requirements that will require input from you?

Great closers plan around these steps as soon as that planning becomes appropriate. That lets them prepare for a seamless purchase process and keep a deal moving along efficiently.

7. They bring in all stakeholders before negotiation starts.

There’s nothing worse than thinking you have the deal in the bag and sitting down to negotiate — only to meet a previously-unknown stakeholder who has major objections you need to address. To prevent this from happening, ask, "Who else is involved in this decision that should be on our next call?" at the end of every sales conversation.

While it doesn’t make sense for your point of contact to bring in the entire executive team on a first meeting, they certainly need to be looped in as the deal progresses — so you aren’t suddenly dealing with five different perspectives you didn’t realize needed to be accommodated at the eleventh hour. 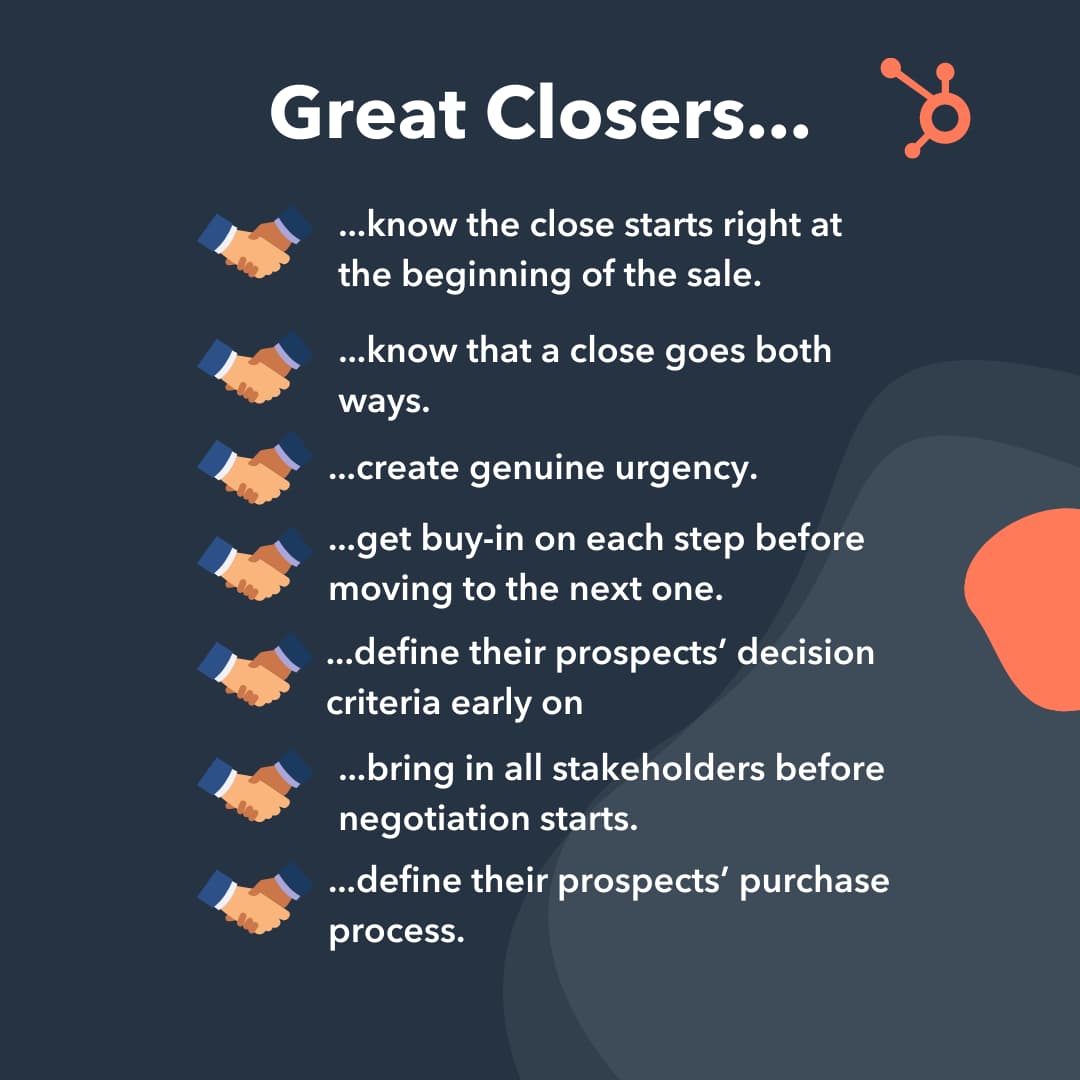 8. They know how and when to stay patient.

You're not going to close a deal on your first call with a prospect — and you'll likely hit more than a few hard "no's" before you land one "yes." You need to know how to remain composed and in high spirits through that process if you're going to be a great sales closer.

You need to be strategically patient — on both a personal level and when interacting with prospects. Hang in there through rejection, and try to avoid pressure selling when engaging with buyers. That being said, you can't be too hands-off when you try to close either.

9. They know when to ask for the business.

Closing isn’t a siloed part of the sales process, but you still have to be proactive about it. When all your prospects’ requests have been met, it’s time to lay it all out on the table and ask your prospect if they’re ready to buy.

The key here is determining exactly when those requirements have been met. It's easier said than done, but if you can identify and act on that key point in your engagements with prospects, you'll set yourself up to close consistently and efficiently.

10. They know their bottom line.

Every prospect wants to get a product for as little money as possible, and every sales rep wants to sell a product with as little a discount applied as possible — but both parties are happy with a figure somewhere in the middle.

At the end of the month or quarter, however, reps under stress to meet or exceed quota can fall into the trap of thinking they need to bring in as many deals as possible.

It’s important to remember that, at a certain point, the pain of accommodating the deal will exceed the benefit of bringing it in. You need to know when to walk away — whether that be when a prospect is asking for an unreasonably deep discount, unrealistic implementation terms, or something else that would be a net negative for your company.

11. They close multiple times during the sales process.

Closers know you don't just close once. Every conversation you have with a prospect should include you asking for some small close. Whether it's asking for a second phone call, a meeting, or a pitch — you should have a close in mind at every touchpoint throughout your sales process.

12. They communicate clearly and concisely.

Exceptional closers understand that confusing or boring a prospect can make an otherwise promising engagement dead on arrival. You need to keep buyers informed and interested — that starts with clear, concise communication.

Don't throw too much technical jargon around. Pare down what you want to say to the absolute essentials, and relay that insight in a calm, authoritative tone. Keep a pulse on the conversations you've already had to understand what the prospect already knows — and structure future conversations around that.

Practice by pretending you're explaining the value and utility of your offering to someone without an extensive background on it. That skill — paired with extensive product knowledge — will translate well when you speak with prospects who have some degree of familiarity with your product or service.

13. They stay positive and professional.

As I mentioned in the eighth point on this list, the best closers know how to take rejection in stride — they understand it's built into the job. You're going to hit your share of "no's" before you land a single "yes."One key factor that separates great closers from their peers is positivity — they remain focused and in high spirits through adversity.

They also know not to get emotional or overzealous with difficult prospects. A sales process is a professional engagement, and you need to treat it as such throughout its course. No matter what a prospect does to irritate you, don't lose control of yourself.

Worst comes to worst you pull out from the deal without burning a bridge. It's not the end of the world, and if you can do it with grace and composure, you'll avoid some potential negative word of mouth. 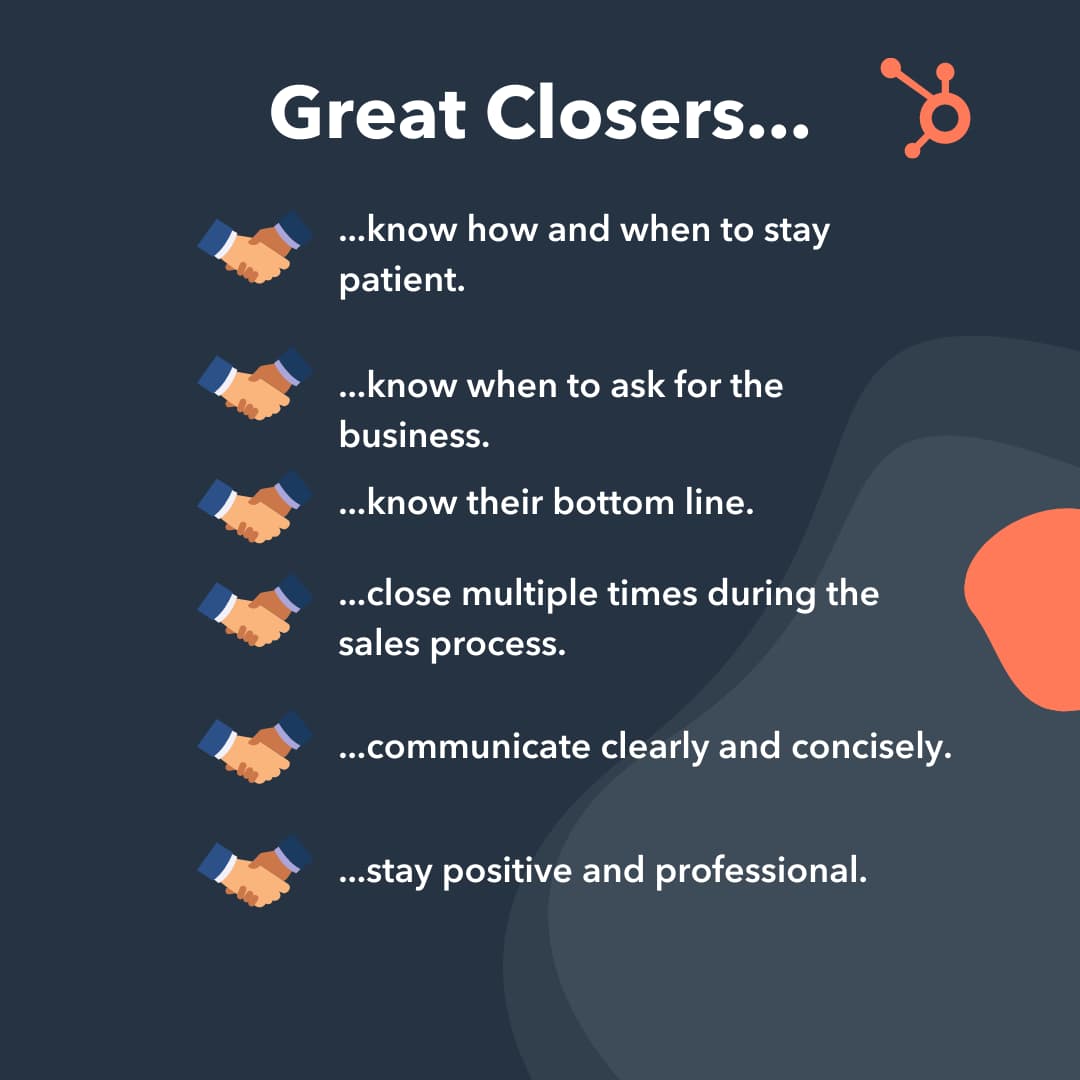 How to Be a Closer in Sales

Closing shouldn’t be thought of as a one-off, dramatic affair. It’s a set of repeatable processes and strategies that permeate every sales conversation you have with a prospect. By applying these strategies to your own selling, you’ll find that closing comes more smoothly and naturally than ever before.