The Beginner's Guide to the Sandler Selling System, According to Sandler's VP of Sales

If you're anything like me, you love systems and processes. 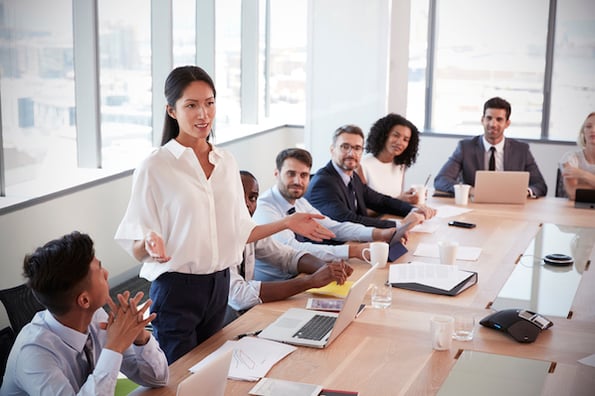 In fact, I think most sales reps enjoy a solid methodology even more than I do.

A popular sales method, the Sandler Selling System, has been around for over 50 years. Essentially, this system emphasizes qualification rather than closing.

As a sales rep, this is an important methodology to consider because 88% of salespeople with Sandler training said their sales strategy improved.

Additionally, 50% more salespeople hit quotas than those without Sandler.

Below, let's dive into what the Sandler Selling System is and how to implement it on your team. Plus, learn tips on how to successfully incorporate the Sandler System into your own team's processes from Rebecca Schmidt, Sandler's VP of Sales Technology Practice.

What is the Sandler Selling System?

The Sandler Selling System, developed in 1967 by David Sandler, focuses on having sales reps act as a consultant rather than a pushy salesperson. This strategy concentrates on asking the right questions during the qualifying process instead of pushing a product on someone who doesn't need it.

Essentially, the Sandler approach to sales is unique because it prioritizes building mutual trust between salespeople and prospects. During this process, the sales rep will act as an advisor and ask questions to assess the majority of obstacles right away in the qualification stage.

Emma Brudner, a former Marketing Director at HubSpot, says, "If the rep discovers that their offering won't truly address the potential client's concerns, they won't waste time convincing them that it actually does — they'll simply abandon the process. Rather than the seller convincing the buyer to buy, the buyer is almost convincing the seller to sell."

While the Sandler sales process might look similar to a traditional selling system ;at first glance, the emphasis is on the qualification stage rather than the closing stage.

The process has three overall stages but is broken down into seven steps. The three stages are: building a relationship, qualification, and closing the sale.

When implemented effectively, the process can help you improve metrics such as deal size (ASP), increasing margin (helping sell on value versus price), decreasing the length of the sales system, and improving forecast accuracy with a cleaner pipeline overall.

As Schmidt told me, "The reason the [Sandler] techniques are so effective is because they are fully grounded in a real psychological discipline that focuses on how people truly communicate. It tends to really take root in an organization when leadership is passionate about improving the performance of their team (sales, pre-sales, customer success), and lead by example."

Schmidt adds, "When we start an engagement and leadership is energized about the process ... we know the team will see results. These leaders will use Sandler to create a culture that embraces improvement at all levels of the organization."

Let's dive into the step-by-step guide next.

During the first stage of relationship building, the first step is to establish a bond with your prospect. This should encourage open and honest communication.

The second step in the relationship-building process is to establish roles and set expectations.

During this phase, it's important to set ground rules and create a comfortable environment within which to do business.

This third step moves us into the second stage of the system – the qualification phase. Now that you've built rapport and set expectations for how this sales process will work, it's time to dive in and uncover the problems your prospect has.

This part of the conversation will help you identify the pain points and reasons why your product or service can help this prospect.

This can be a difficult stage to teach your reps.

In fact, Schmidt told me this is one of the more challenging phases, as "sales reps often struggle with moving beyond 1st level pain with a prospect because asking the 2nd level questions ('How have you tried to solve this?' 'How much has not fixing the issue cost you?') and 3rd level questions ('How is this impacting you professionally, personally?' etc.) can feel uncomfortable."

Fortunately, if you're struggling to teach the qualification phase to your reps, Schmidt has a solution.

She advises, "at Sandler, we work with reps to uncover the self-limiting belief(s) they may have about executing any technique and then work to establish a positive belief and behavior to support the new belief."

Additionally, Schmidt encourages reps to choose new behaviors to support this belief. For instance, perhaps your reps decide to ask 2nd and 3rd level pain questions on their next two calls and then report how it went.

Normally you might see this component of a sales conversation toward the end of the process, but in the Sandler Selling System, you'll discuss the budget during the qualification phase.

If your prospect can't afford your product, there's no point wasting your time trying to sell it to them.

During this part of the qualification process, you'll discover if your prospect is willing and able to invest the time, money, and resources needed to fix their problem.

The last part of the qualification phase is to discuss the decision-making process. Find out who, what, where, why, and how the prospect wants the buying process to go.

Moving on to the closing stage of the process, this is when you'll propose your product or service as the solution to the prospect's problem. Your proposal will fulfill their requests, specifically about the budget and the decision-making process.

Don't forget to use everything you've learned during the qualifying process in your proposal.

At this point, it's time to seal the deal. Establish the next steps and prevent the loss of the loss to the competition or buyer's remorse.

Now that we've discussed what the Sandler Selling System is, you might be wondering, "How do I implement this at my company?"

Let's review how to train your sales reps with the Sandler system below.

To get started with the Sandler Selling System, you can have your reps take Sandler training courses online.

In fact, Sandler Training offers plenty of training and development courses both in-person and online.

Additionally, let's dive into a few tips from Schmidt on how to get the most out of the system and implement it effectively.

Implementing any new trainings into your team's existing processes can be challenging, but there are certain strategies and techniques you can use to make it easier.

For the Sandler Selling System, for instance, Schmidt told me, "Organizations who are successful with Sandler ultimately weave the methodology into their sales process."

She adds, "If they have a 5-stage sales process, for example, they would work to identify which pieces of Sandler fit within each sales stage and which pieces can be used throughout — making it easy for the rep and managers to see how Sandler helps them execute more effectively." 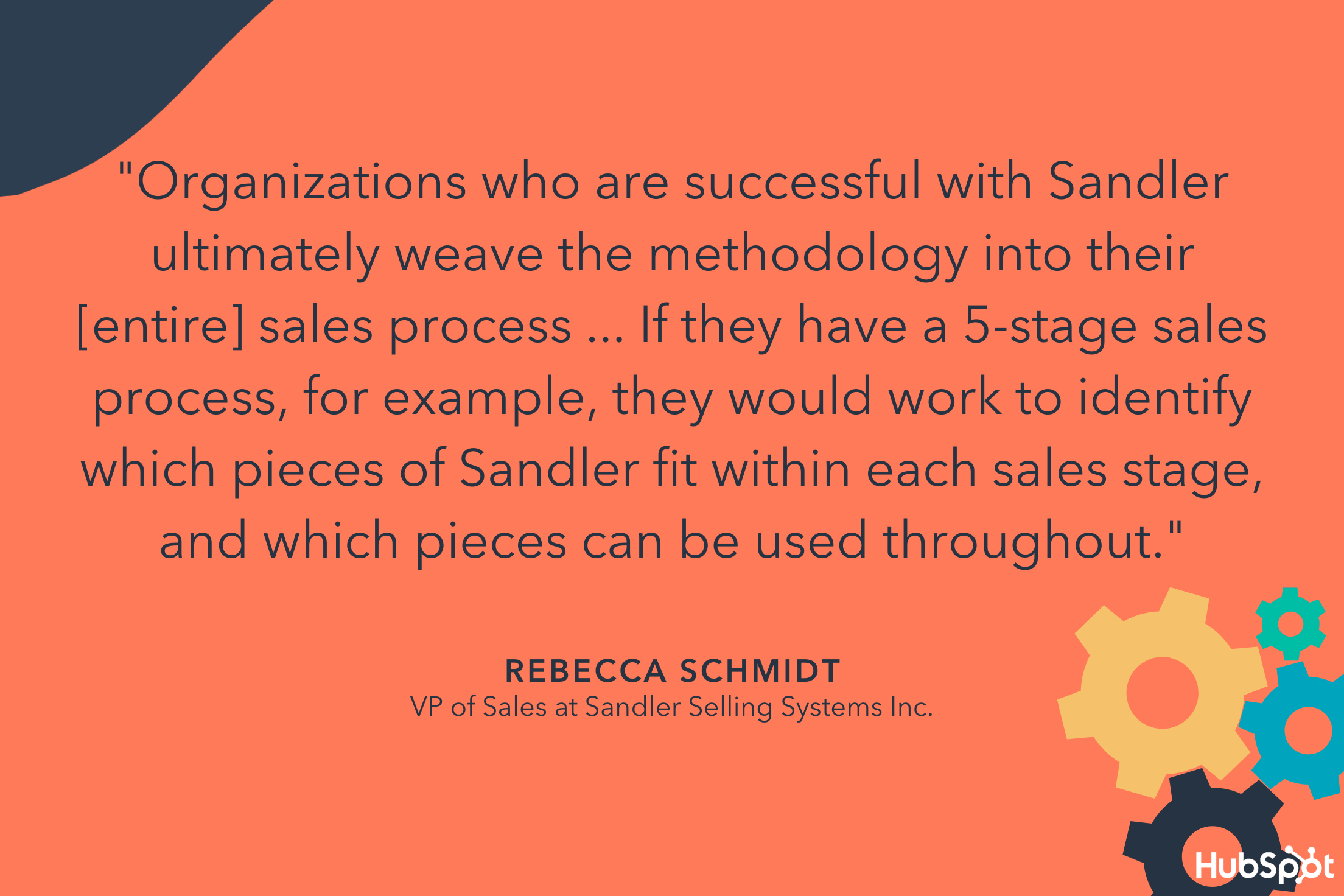 Perhaps, for instance, you incorporate the Sandler Up-Front Contract™ into every sales stage by requiring your sales leaders to ask their reps, 'What does your up-front contract sound like for your next call?'

Additionally, for individual stages like the Pain Funnel™, managers might reinforce those same questions in other stages, like during the 'Discovery' or 'Qualification' stages, by asking their reps, 'When you asked the prospect, 'How much has not fixing the issue cost you? ... How did the prospect respond?'

Ultimately, change isn't easy, but the more your leadership can incorporate the Sandler Selling System into existing processes, the easier it will be for reps to get onboard.

Additionally, it's important to note that each organizations' sales process looks different. To effectively incorporate the Selling System long-term, you'll need to figure out what works best for your unique team's working style.

To properly teach the System, it's vital you take the time to master it first. As Schmidt tells me, "The biggest roadblocks managers and leaders face is trying to reinforce concepts they do not fully understand themselves."

"To make sure this doesn't happen," She adds, "the managers are always present (and actively engaged) in our rep training and we have separate manager-focused sessions teaching them how to reinforce Sandler throughout their sales process."

For a more in-depth look on how to implement the Sandler Selling System into your team's process, take a look at this video:

As a visualization, the Sandler system is best represented by the image of a submarine. According to the website:

"When David Sandler was developing his selling system, he chose the imagery of a submarine to communicate his vision.

He was inspired by watching movies about World War II, when submarines were attacked, to avoid flooding, the crew moved through each compartment, closing the door of the previous compartment behind them.

The Sandler Selling System requires the same procedure to avoid ‘disaster' on a sales call. Your goal is to move through each compartment, or step of the selling system, to arrive safely at a successful sale."

The Sandler Selling System isn't the only one around, but it's one of the best systems for getting to know your prospects. This system provides a great opportunity to truly qualify your prospects so you sell to the right people.