The Player You Should Add to Your Sales Fantasy Team 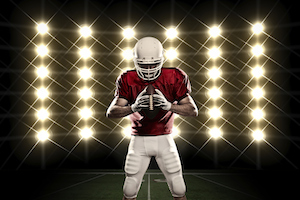 Let's start by saying that I don't like the Denver Broncos. January 25, 1998 was one of the saddest days of my life, and prevents me from cheering for John Elway in any fashion.

But it's hard to dislike Peyton Manning.

You just have to like his Southern manners, his big stats, and his comeback story. But recently I read an article about Manning's offseason that gave me a new reason to like him.

He'd be really good at sales.

The reason is simple. Great sales people, just like great NFL players, find ways to get better at their craft each and every day. Peyton does it by reviewing hundreds of plays and picking apart what he could have done better. Great reps do post-mortems on sales opportunities and re-listen to recorded calls to learn how they can improve.

Here's how Peyton breaks down his film, and what he would be watching if he were in sales.

Get started with the big one. Peyton re-watched his biggest and last game to understand how his team was clobbered back in February. In sales, this is that monster deal that you were working on all year which would have jumped you to #1 rep in the company and sent you to Hawaii, but in late December went sideways. It deserves extra attention based on the time spent and opportunity missed.

Go back through every email and meeting. What was your agenda for each meeting? Did you have clear success criteria each time and did you accomplish it? Did you follow your sales process? Where did things go sideways? Don't settle for surface answers here. Spend time digging in with your sales manager to uncover the root cause.

Peyton threw the ball more than any other quarterback in the NFL in 2013. In the offseason, he watched all 787 passes to understand patterns in his play.

In sales, Peyton would be reviewing the notes from all his discovery calls and demos. This may seem daunting, so don't wait until the end of year. Do it monthly to understand the patterns in your sales game. Are you taking prospects down a pain funnel? Did you ask good questions? Are you listening to the answers or jumping to conclusions? Did you find a problem and match your solution to it, or just give a cookie-cutter demo?

These are the fun ones. Peyton watched (probably repeatedly, even if he wouldn't admit it) all of his record-setting 55 touchdown passes to see why he was successful.

Even if Sales Rep Peyton closed more deals than anyone in the company, he'd take the time to go back and review each of them. Have fun with this, but also keep a critical eye on what went right and how you influenced it. How were you able to guide your prospect to the finish line? Learn from your successes, not just your failures.

Ouch. These not only hurt to throw, they hurt the entire team. This film isn't fun to watch, but there is a lot to be learned.

In sales, Peyton would look for deals lost to his top competitor, strategic accounts he missed, or the big reference customer who churned. There may not be a lot of these each year, but when they happened they hurt the whole company. Each deserves a deep dive. Put thoughts down on paper about why they were important, what your plan of attack was, what went wrong, and if you had the chance to do it all over again, what you'd do differently.

Even with the touchdown record in hand, Peyton looks for plays that should have been, but didn't come through. These don't hurt the team like the interceptions do, but still offer areas to get better.

The missed touchdowns are deals you should have had, but a small mistake either lost the deal or caused it to push to next quarter. It could have been a poor negotiation or a mishandled sales call. Look at the opportunities that made it to your last sales stage, but you lost them. Find out what happened on these opportunities that were so close to the finish line but didn't make it. You did a lot of work to get them there, and a small improvement can mean a big increase in results.

6) Throws That Should Have Been Intercepted

Sometimes Peyton just gets lucky, and a really bad throw hits a defender in the hands but is dropped. Whew.

These close calls are easy to forget since they turned out okay, but great sales reps know to dive in so they don't make the same mistakes again. This was the deal that was going to buy from you no matter what you did. You might have quoted the wrong price, missed a key meeting, or just generally stuck your foot in your mouth. You shouldn't have won it, but you got lucky. Next time you may not, so review what happened here and make a note to not repeat your mistakes.

This is a lot of film to watch, but it's how the great ones keep getting better. Next time your month or quarter ends, carve out a few hours to look back at your own performance. Break things down into these six categories, review the tape, and come up with an improvement plan for next month. You'll be Hall of Fame bound in no time.

11 Traits Every Sales Hire Should Possess (& How to Uncover Them in an Interview), According to Sales Managers