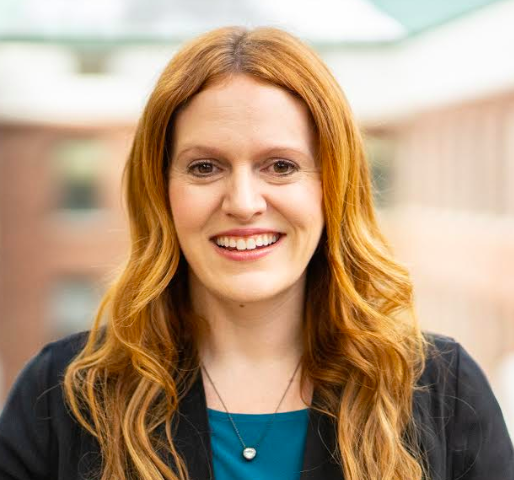 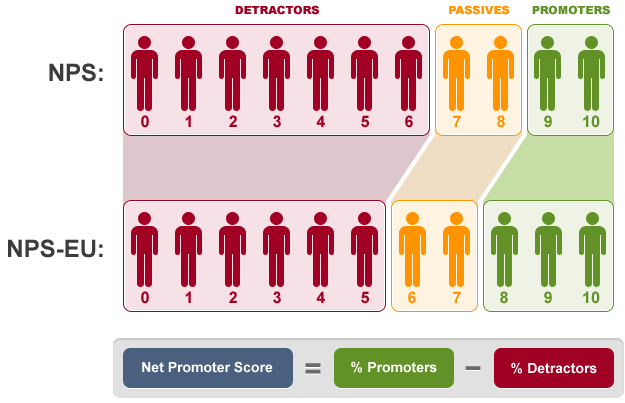 With contributions from Jay Bucci and Mimi An

Data is incredibly powerful. It can inform, persuade, and reinforce. However, it can also mislead. We all bring our own biases to the table when we interpret data, and that can often lead to drawing an inaccurate conclusion.

At HubSpot we’ve made a few assumptions about our own data in the past, specifically, in regard to Net Promoter Score®, or NPS. NPS is a customer satisfaction benchmark that measures how likely your customers are to recommend you to a friend or colleague. Here’s what a typical NPS question might look like:

If you are curious about NPS and would like to read more, check out this blog post.

At HubSpot, we use NPS to track customer satisfaction -- it is our North Star in ensuring we solve for the customer as a company. And we’ve discovered, along with many companies that operate globally and serve customers internationally, tracking NPS can get complicated. Customers in different countries seem to have strikingly different assessments of their experience. So, what in the world (literally) is going on here?

Assumptions HubSpot Made in the Past

When tackling the question of why there is a continual discrepancy between international and, in HubSpot’s case as a US-based company, US NPS, my peers and I have put together a few theories from our collective experience:

However, even the way the question is asked in certain markets, like Japan, might be leading people to answer differently than they otherwise would if the question were phrased differently. This led us to wonder, is it merely a matter of how we ask the question in each market?

We’ve also heard that in certain markets the likelihood of a literal interpretation can lead to a rating of “0” -- primarily because there is no “does not apply” option available to them. While this phenomenon might occur more often in other cultures, some Americans take this very literal approach to interpreting the question too. Other countries, like Germany, have the scale flipped, where the best possible score on a 1 to 10 scale is actually a 1.

What Others Say about Regional NPS Variance

I’m not the first to do some research on the topic, and the good news is… it’s not my imagination! There are quite a few cultural differences and other reasons that NPS scores tend to vary by region and language. Here are a few findings and references from some high-level research on the topic.

Satmetrix published a report showing that:

The advice of the lead author of the study is worth highlighting:

“Without a mechanism to distinguish true performance differences from cultural response bias, comparisons of survey results across countries or regions can lead to inaccurate results and compromise the ability of decision-makers to confidently act on the data,” said Dr. Laura Brooks, co-developer of Net Promoter and Vice President of research and consulting at Satmetrix.

“Companies that operate in multiple countries need to better understand how cultural factors influence customer survey responses, taking into account these differences when analyzing and acting on customer feedback.”

Here’s another interesting take, from an article with a Dutch perspective called, “Why There Needs to Be a European Variant of the Net Promoter Score”:

When Americans are asked to rate something on a scale of 0 to 10 they give more extreme responses as compared to their European counterparts. This scoring bias is deeply ingrained in the cultural differences between Europe and the US. American children are expected to get all A’s, even in high school. In Europe where tests are graded on a scale of 0 to 10, students can almost never get a ten. A teacher of my daughter once said that an 8 is great, a 9 is for geniuses and 10, well only God can get a 10.

When European respondents, growing up in such a school system, are confronted with a classic NPS scale of 0 to 10, they will – if extremely satisfied – give an 8 (a compliment in their mind). I see plenty of surveys conducted in Europe based on some American template where these respondents are then asked “What can we do to get a 9 or 10?” They inevitably respond with “Nothing, I love your company!” or “Nothing, it was the best service I ever had.”

In classic NPS scoring, the 8 from these respondents has no weight! They are ignored. That is why so many European companies have neutral NPS scores. What I propose is a European Net Promoter Score variant where an 8 also counts as a promoter and 6 as passive.

They even go so far as to show this visual as to how they might change it, by simply considering anyone with a score of “8” to the “promoters” bucket:

Another article showed how Typeform looked at not just the raw NPS, but also at “percentage of promoters” when reporting their regional variations. 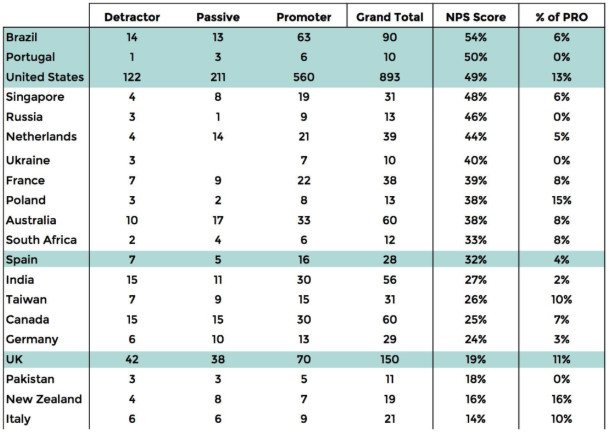 One could argue that metrics like “percentage of promoters” in each country (or even looking at the flip side, “percentage of detractors”) might be more valuable than looking at raw NPS scores in isolation, and perhaps less controversial than creating a “weighted” version of NPS or changing the actual NPS methodology by region as the prior article suggested.

And, one more snippet:

US customers tend to give higher ratings than just about anyone else. In Germany, customers tend to rate very conservatively, even if they are satisfied. In Japan, it is considered poor etiquette to rate any provider too highly or too poorly, regardless of their performance.

What can be done about it? The answer is straightforward: only compare scores within a country. Trying to compare across countries can be a frustrating and fruitless exercise. It is not likely to yield any useful insights. What does work is comparing results within a country and tracking how those results change over time. The only potential difficulty this poses is ensuring you have enough respondents in each country to provide robust insights.

Regional Differences Matter in the United States Too

When researching this topic, I came across this interesting NPS analysis across various regions of the United States. 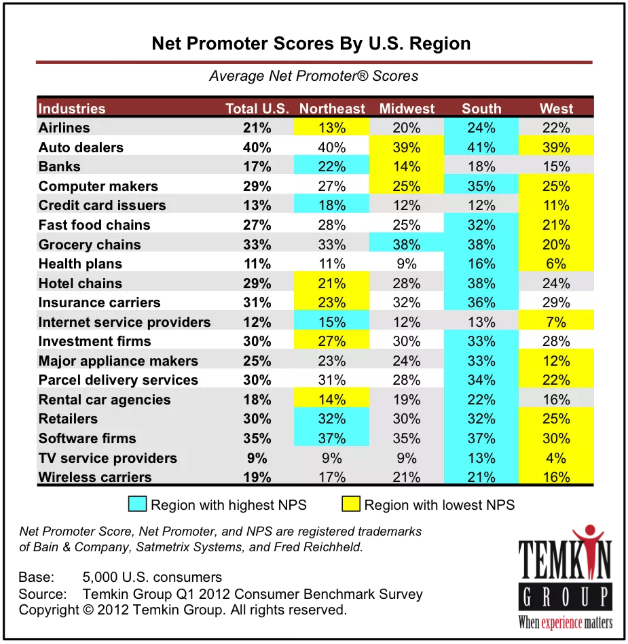 Hailing from the Midwest, I nodded my head when I saw the “middle of the road” tendencies of the people from my native part of the country, as it tends to ring true to me culturally also. I also found it interesting that people in the South tended to rate companies higher in most industries, while folks out West seemed to rate companies less effusively. The Northeast is a mixed bag.

We certainly don’t have all the answers yet where NPS variations by region are concerned, but here are a few things to highlight for the time being:

In 2019, the HubSpot team will continue to investigate the best ways to gather feedback from customers internationally. We'll publish our findings, so stay tuned!

[New Research] The State of Customer Service in 2019