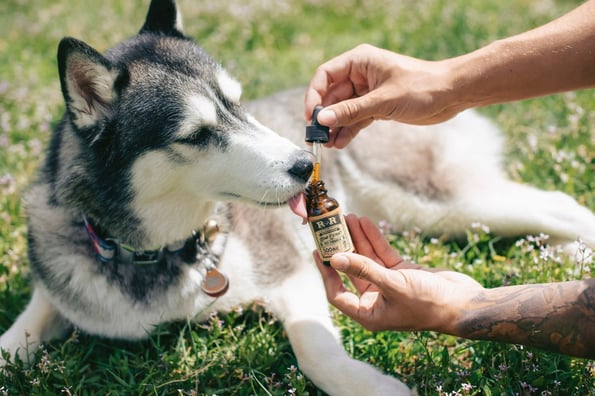 What you need to know: Pet supplements have risen in popularity because of the increase in pet ownership and humanization of pets. The $636m supplement market is expected to grow at a 5% rate, and CBD is leading the way. CBD sales are expected to increase at a 57% CAGR.

How you can capitalize:

Last month in Las Vegas, the Mandalay Bay Convention Center transformed into Super Zoo, the largest gathering of pet retailers in North America. The thousands of people who attended woke up to dog yoga and ended their days with talks on pet sustainability. In between, on the tradeshow floor, they saw ungodly amounts of hemp.

For people, CBD and hemp have never been hotter, and pets are next. According to estimates from True Leaf and the research company Packaged Facts, pet CBD sales, were valued at $13m in 2017 and $20m this year.  True Leaf anticipates they will grow at a 57% CAGR during the next several years. The overall pet supplement and wellness market is worth $636m and is expected to keep chugging at a 5% growth rate. 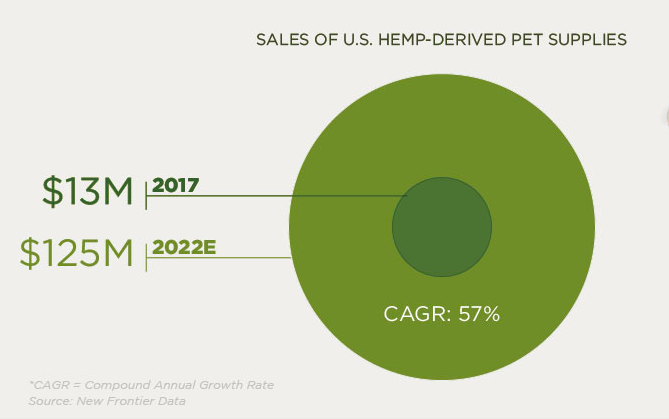 This sector of the pet industry thrives on the personification of pets. Some 90% of pet owners consider their pets family and treat them as such. They seek animal versions of the same supplements and wellness products they use: pills, chews and sprays that combat everything from depression to Alzheimer’s to joint pain. Just like with humans, CBD is being used to treat animals’ chronic pain, seizures and anxiety. CBD is most commonly used for dogs but also for cats and horses.

Bill Bookout, the founder and president of the National Animal Supplement Council, figured at least 150 companies exhibiting hemp and CBD-related pet supplements were at Super Zoo, double the number he had seen at other recent conventions. Darcy Bomford, the founder of True Leaf, which at four years old is a veteran in the pet CBD space, estimated the number of Super Zoo vendors specializing in CBD at 70. He pegged the number of companies offering a CBD product in some form at more than 300.

Three years ago at conferences, he remembers the hemp-CBD section featuring True Leaf and two other companies. “I’ve never seen anything like it,” Bomford says of the growth.

Although a number of entrants have already swelled the pet CBD market, no company has established a dominant hold, and changing regulations could lead to an influx of hemp and CBD in other pet products, creating more opportunities and potential revenues. 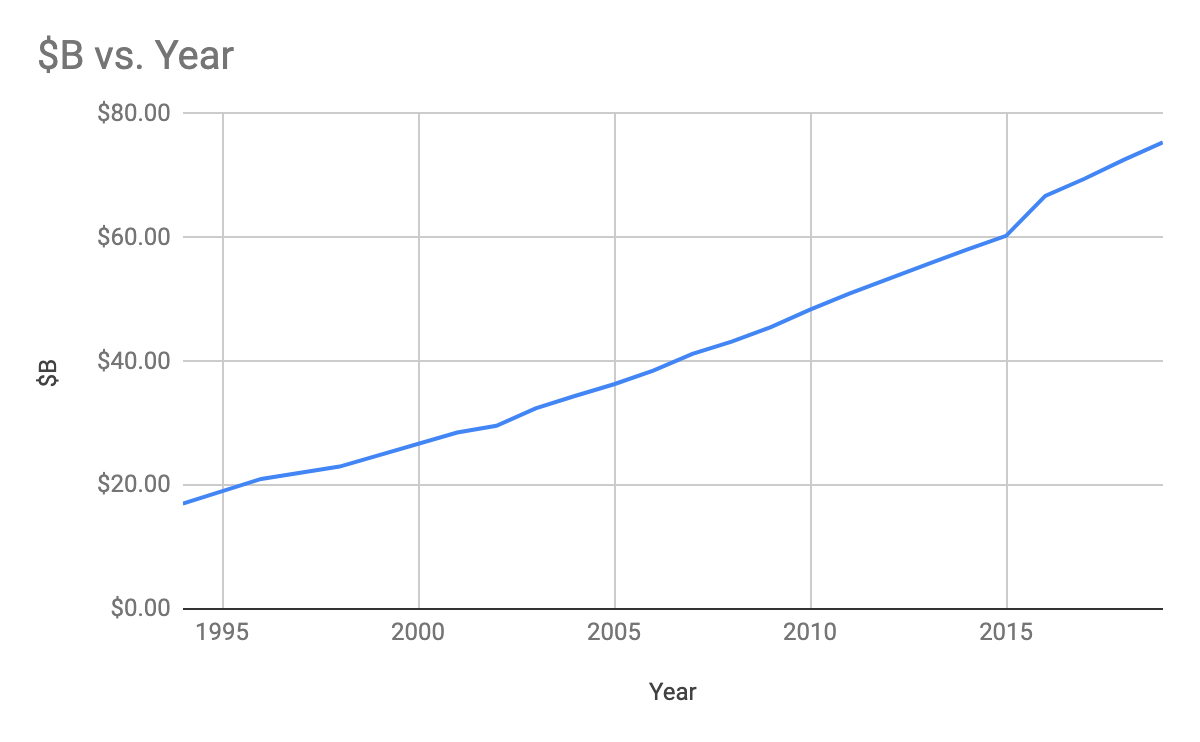 Medication, mostly from veterinarians, was once the only way pet owners could treat their pets. That changed in 1994 when the U.S. government passed the Dietary Health Supplement Act, opening a new world of alternative treatments for humans. Companies presumed the law applied to animals, too, and the industry sprung up from nothing.

Twenty-five years later, Bookout says the industry is stronger and more stable “with much more activity than I have ever seen.” The 25-to-34 age group, according to the research group Packaged Facts, represents the largest segment interested in supplements. Bookout says millennials, who are forgoing kids and buying pets, are treating pets the same way they would a family member.

The biggest goal for these pet owners tends to be prolonging their pet’s life. As journalist Gray Chapman noted in a personal essay on Vox, “I’m a sucker for my animals, largely because confronting their mortality is worse than thinking about my own.”

And when a pet’s life cannot be prolonged, the next best step is making its last years as comfortable as possible. As pets age, they tend to suffer from hip and joint pain. Bomford says past treatment typically involved failed human drugs that could potentially harm pets’ livers and kidneys.

This is why CBD and hemp products have erupted in popularity. “We incorporated the hemp seed, and it’s the same kind of ingredient you’d find at health food stores or Whole Foods,” Bomford says.

From supplement to staple

True Leaf was incorporated in 2013 and started selling its hemp-based products in Canada in 2015 and in the United States the next year. Bomford started the company, which is now public, without about $100k. True Leaf’s revenues have grown from $40k that first year to $300k to $1.4m to $2.3m.

It has raised about $25m from investors. The bulk of that money has gone to building a facility where True Leaf can cultivate its own product. Bomford has said True Leaf will be the first pet-focused CBD company with this advantage.

The facility is part of a strategy that potential entrepreneurs should heed.

And the best opportunity for pet CBD may involve placing a bet on its eventual split from the supplement category. For now, pet CBD must be packaged as a supplement. It is not approved to be used in food by state and federal governing bodies. In the future, Bomford expects those rules will change, and CBD will be allowed in pet treats and pet food.  “(It is) not generally recognized as safe, which is kind of crazy. It’s sort of been lumped in with its naughty cousin marijuana,” Bomford says.

Food accounts for about 40% of all pet spending — about $30B — meaning the potential revenues for whoever succeeds in this area could be far higher than they are for CBD supplements. 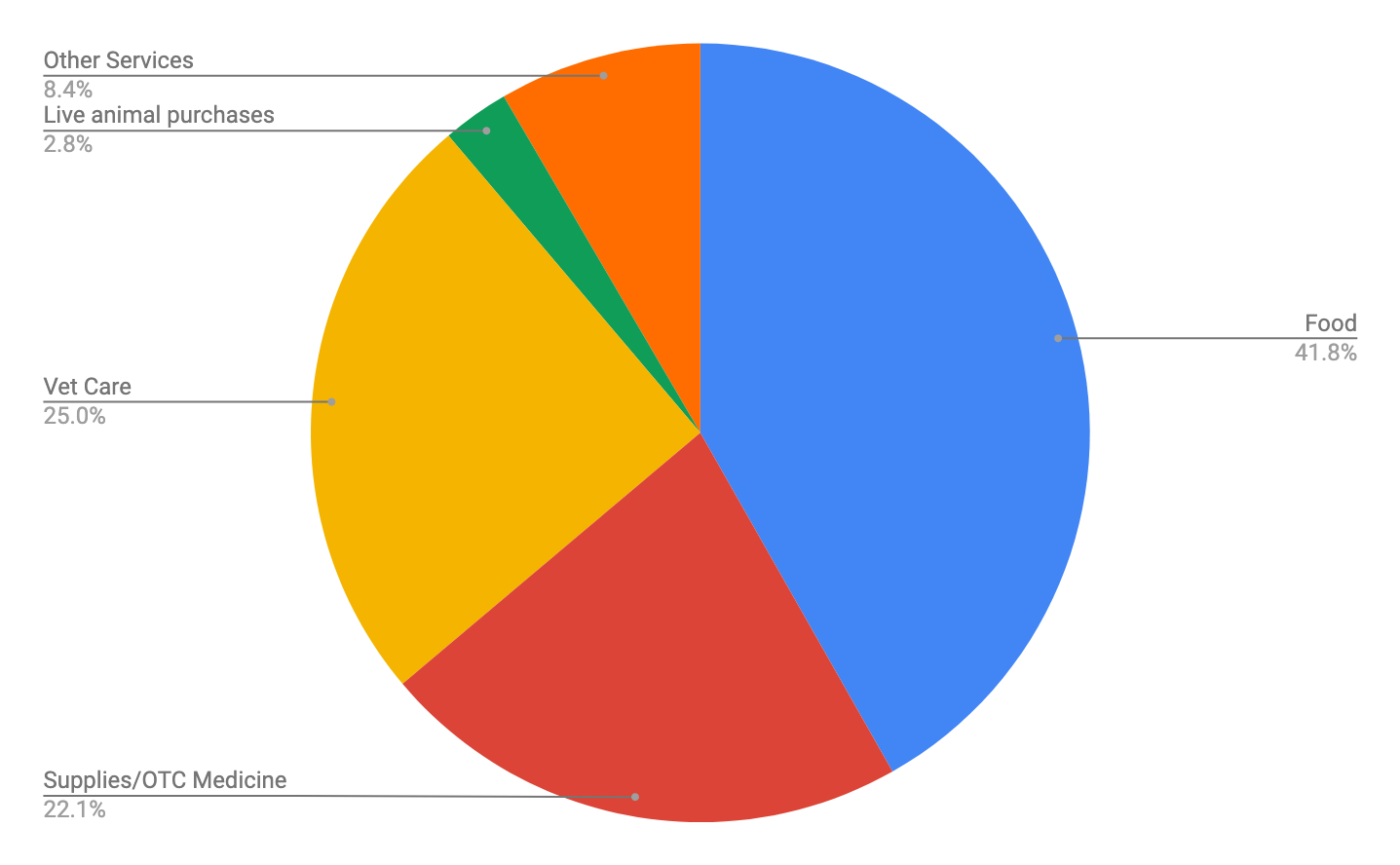 The silver tsunami for dogs

Another statistic suggests pet CBD will keep growing in the next decade.

Of the 70m dogs in the United States, about half of them are under four years old. CBD has been taking off in a population that features relatively few older dogs. In several years, these 35m young dogs will begin dealing with joint pain and other late-life ailments. More people than ever will want to comfort their pets.

“People are going to help them,” Bomford says. “I’ve had dogs my whole life and the hardest part is losing them. And you’ll do absolutely what it takes to make it better for them at the end.”