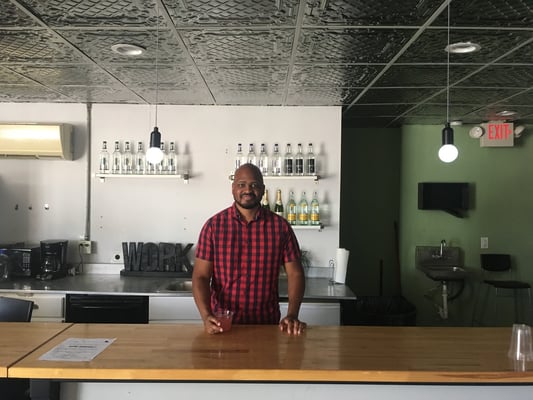 On a stretch of Austin’s eastside that features a popcorn cafe, vintage store, vegetarian soul food restaurant, and the city’s oldest black-owned barbecue joint, Chris Marshall has a drink waiting for me at his bar. And by drink, I mean not quite a drink. It’s a Rosemary and Ginger Mule. There’s no alcohol. There’s never alcohol in here.

Marshall owns Sans Bar, an Austin-based alcohol-free bar, and has also hosted pop-ups in places like Los Angeles, Portland, and Kansas City. He’s a recovering alcoholic and a former counselor. Every Friday before he opens the bar, Marshall says, he thinks about former friends and patients who relapsed and didn’t make it.

But he’s also focused on business. Sober bars, although they’ve been gaining attention in New York, have typically not worked in America, and Marshall wants to change that. His goal is to have a Sans Bar in every city and Sans Bar brand drinks in stores, to be the Starbucks for the sober-curious era.

His business right now consists of the brick and mortar location in Austin, which he opens on Friday nights and occasional Saturdays and rents on a part-time basis from a nonprofit, and a pop-up circuit where 100 to 300 people often show up to experience a sober bar atmosphere. Sans Bar serves concoctions like the Rosemary and Ginger Mule, a spicy, habanero-infused beverage called the Rattlesnake and the sugar-free Garden Dandy, which has muddled cucumber mint.

His business began with $500 of his own money and $500 from his mother. When Marshall started in December 2017, at a pop-up in Austin, six people showed up. After some local media attention, he started attracting pop-up crowds of 50 or so people. About a year ago, he decided to open the physical location.

His timing has been fortuitous, coinciding with the growth of the sober curious trend. A well-publicized British study suggested that more than a quarter of people ages 16-to-24 are non-drinkers. Young people who don’t have drinking problems are cutting back on alcohol for health and productivity reasons but still want to spend time out with friends, opening a market that a few years ago didn’t exist.

“Alcohol-free bars are a really interesting idea to us as the value proposition of a traditional bar is already somewhat separated from the alcohol––nobody goes to a bar to buy an $8 beer because it’s the best price, they go because they want the experience,” says Catharine Dockery, whose Vice Ventures firm has supported the Brooklyn alcohol-free bar Listen Bar. “Alcohol-free bars allow for a more varied experience while also catering to health conscious consumers who might shy away from drinking.”

According to a survey of Sans Bar patrons last year, 75% of Marshall’s customers are sober-curious; the other 25% are recovering from addiction. He had expected a nearly opposite ratio.

On Friday nights, an average of 35 people visit Sans Bar, though the number varies. He charges a $15 cover for unlimited snacks and drinks, and the people socialize in a setting that––with sofas, faux chandeliers, and tables––resembles a living room (ironically the space was an illegal bar during Prohibition). The music is soft and the bartenders welcoming. Customers come for an inclusive atmosphere where they can have a conversation. Many of the drink ingredients come free; Marshall has partnerships with Topo Chico and other brands, and his profit margin is high.

“These sober drinks are pennies on the dollar. Anyone that’s charging––I saw in Manhattan––like a $15 mocktail, that’s ridiculous,” he says. “No one should be paying that much no matter how great it is. Nobody should be paying $15 for a drink that doesn’t change the way you feel.”

Marshall declined to offer how much revenue he makes but said he is profitable and left his counselor job earlier this year. In addition to the Austin location, Sans Bar offers hospitality services at weddings, college parties and corporate events. The company also makes money from the pop-up events.

Marshall has been deliberate in building slowly. Although sober bars have been successful in Great Britain, they have been rare and largely not sustainable in the United States.

Counterfeit Bar in Phoenix, for instance, earned publicity and $10,000 in crowdfunding but didn’t open. Marshall reached out to as many owners as he could and asked why they failed at the challenging task of turning a profit without providing alcohol. Even restaurants make as much as 75% of their profits from selling beer and spirits.

Marshall’s main discovery from studying the other businesses was: “You’re never going to make enough money to be sustainable going at this full time right away. Because it’s such an untested concept. You need to build an audience and that’s where the pop-up model comes in.”

If the cities where he’s traveled for pop-ups bring large enough crowds, Sans Bar starts hosting regular pop-ups. That’s what happened in Kansas City, where a licensee now has a pop-up every month. Within the next couple of years, Marshall’s goal is to develop the Sans Bar drink brand and open more physical locations. He says that Atlanta, Tampa Bay, and Southern California are among the top choices.

As he deals with the challenges of growing his business, Marshall still tries to think like a counselor. If someone recovering from addiction has $5 instead of $15, he will let them in.