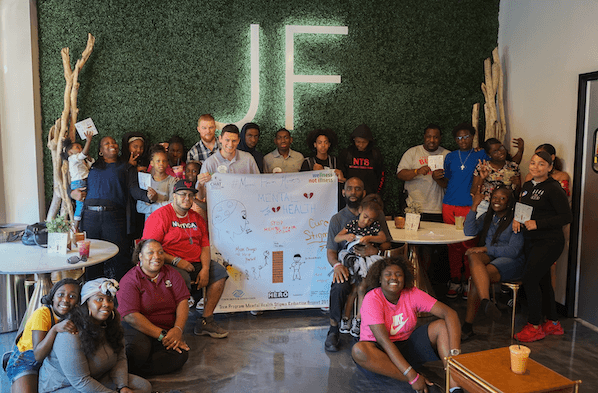 A brush with synthetic marijuana flipped Garrison Grant’s life upside down. He’s since used entrepreneurship as a vessel to help other young people.

Garrison Grant had it all in 2011: playing on SUNY Brockport’s lacrosse team, living away from home for the first time, and enjoying a new social scene. Like many college freshmen, Grant took up drinking — sometimes too much — and smoking marijuana.

But one occasion of unknowingly smoking synthetic marijuana changed the course of his next decade. The chemical formulation sent him hurdling into a drug-induced psychosis that landed him inpatient at a mental health hospital. Grant saw a slew of psychiatrists and began taking medication in hopes of balancing out his mental state and returning to his baseline.

“I went from feeling on top of the world at school to everything crashing down,” says Grant. “I went through 5 years of depression and isolation while doctors tried to figure things out.”

Grant ultimately transferred to a new college, and after 5 leaves of absence and 7 years in total, was able to graduate with his degree. But after his harrowing experience, he knew he didn’t want others to experience what he had.

“I decided I wanted to start an online space where people could chat about similar experiences so they didn’t feel so alone,” he says.

The idea led to the birth of Let’s Chat About It, an upstate New York business founded in 2017 that partners with schools to bring mental health programming to students. The venture was co-sponsored by a $5k grant from New York state to work on their anti-stigma initiative in schools. Over his 1st year, Grant met with 20 students over 8 weeks in sessions that covered topics such as “how food impacts your mental health” and “drug prescriptions and stigma.”

To fund his business, Grant raised money through competitions, grants, and accelerators. He took part in the Air Force Research Lab Commercialization Academy, winning its demo day vote, and was awarded money from the National Science Foundation’s I-Corps, the New York State Office of Mental Health, and others. In total, Grant has raised around $22k for the business and plans on raising more.

So far, he’s partnered with Siena College, Skidmore College, Rensselaer Polytechnic Institute, Bethlehem High School in New York, and the Boys and Girls Club of the Capital Area, working with more than 300 students in total.

Grant, who finds talking about his experience cathartic, also launched The We Not I Podcast in 2021, where he converses with guests about mental health issues. He keeps a varied guest list — from his close friends to strangers he found on TikTok — and prioritizes creating a place where people can freely share their stories.

Though mental health is his passion, Grant’s full-time job is at his family’s business, Grant Graphics, a graphic arts company that sells large-format inkjet and custom printers. Being part of a family business has given Grant unique insight into mental health and entrepreneurship.

He says he prizes flexibility, and understands that like him, everyone on his team goes through their own hardships. To keep himself grounded, Grant practices his tried and true coping mechanisms: playing hockey 3 times a week, meditating, and focusing on breathwork and mindfulness. Plus, drinking 3 liters of water per day.

“Come back to your physical health first and start with your body,” he says of ways to maintain mental well-being. “Sleeping, eating, and exercising. If you can hone in on the basics of that, it will always help.”