Married to the Job: Five Questions Answered by a Co-Founder Counselor

When romantic partners hit bumpy waters, they can turn to couples counseling for professional advice. But when co-founders fall out of sync — which they often do — there are far fewer resources to help them heal the rift. 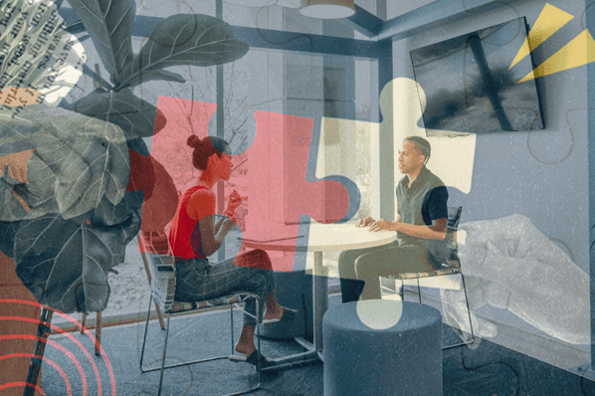 The Hustle sat down with Jones to talk about the delicate, unique co-founder relationship and practices entrepreneurs can implement to keep theirs healthy for the long run. [The below interview has been edited for brevity and clarity].

The Hustle: How can founders set themselves up for a successful relationship when looking for a co-founder?

Dr. Matt Jones: This is a layered question. Part of what people talk about from a business POV as being incredibly important is access to resources and expertise that you’re not as strong at — what they call complementary skill sets.

What I care about as a co-founder coach, though, is the psychological compatibility component. This is something I think is completely overlooked and is just now starting to get the attention it deserves.

To that end, the best way to know if you’re getting a good fit is through working together. Putting in a casual agreement and working in an informal way for a period or months so you can stress-test your partnership. You can develop skills, learn from each other, and better understand how to communicate with one another.

Sometimes the people you get along with the most are actually not going to be the best fit for a co-founder, [and] people you have a strong aversion to might not actually be the worst fit — it’s about how you grow together.

TH: What should co-founders absolutely be aligned on before going into business together?

Jones: I think it’s important to check core motivations. Is it someone who wants to make a lot of money? Is this an individual who values impact at the expense of money, if needed? Or is it someone who really wants to have control over their day, and values that autonomy over anything else?

There must be some degree of alignment on that initially, or the decisions you make down the road will start to differ quite a bit, which brings more and more points of friction.

Another thing that is super important is the degree of commitment of each co-founder. If the business is a side project for one person but a full-time job for the other, that will definitely create friction. Emotionally, there needs to be a commitment to have important conversations, give each other feedback, and reflect on how you converse with one another.

The bulk of the work I do is getting founders to think about how they are relating to one another, because if you don’t take a step back and think about how you’re communicating, chances are it’s not going to have a good result. Those important conversations will either be avoided, or one person will be defensive, or you’ll attack one another — it just escalates from there.

TH: What are some red flags to be aware of when choosing a co-founder?

Jones: If [you and your co-founder] are not able to clarify roles and responsibilities. And that’s not to say it needs to be a walk in the park, but if you’re three months in and that’s a recurring issue, then that’s a major red flag.

From an emotional perspective, red flags are things like criticism: feeling criticized or attacked as an individual, as opposed to just your work being critiqued. Or things like defensiveness.

If you’re not able to give open and honest feedback because you feel unsure of how the other person is going to handle it, that’s an important sign to take action and actually give that feedback no matter what. You actually need the data of how that person responds to make a decision about whether [you and your co-founder] are going to be able to move forward.

Once stepping on toes, not receiving feedback, criticism, and defensiveness start to accumulate, that’s where things get dangerous and you enter shaky territory.

TH: What are the most common problems that arise between co-founders?

Jones: The biggest umbrella term is communication, unsurprisingly. But within that umbrella I see several main challenges and circumstances. Some of those have to do with the process of fundraising or just after closing a fundraising round. [It’s] a time when new parties are involved and there are new pressures and expectations, which can cause a lot of conflict.

I also see challenges in roles and responsibilities more broadly: They need to not just be discussed upfront, but also continually revisited and changed. Especially as companies scale and transition from more individual contributor work to managerial, that’s another friction point internally, individually, and as a team that you need to navigate.

Some people will talk about personality differences, which can show up more as pressure grows. You might see one co-founder who is excelling in transitioning from individual contributor to management, and you might see another co-founder who’s really struggling with keeping up. That can be an immensely difficult and painful moment that founder teams have to face and navigate.

TH: How can founders better communicate with one another?

Jones: A thing founders often overlook is setting a clear frame for a conversation. If you’re going to give someone feedback, instead of mixing that in with talking about business or how frustrating a certain event is, it’s really helpful to separate it more.

Take turns in how you’re communicating when you’re talking to one another and practice reflective listening skills. That’s saying: “I know I heard you say XYZ,” and repeating that back to them to check for accuracy.

That’s a very simple skill (that can be annoying, and a time suck), but it helps the other founder feel understood. And part of what I notice as being a core cause of conflict is each individual not feeling understood, and therefore doubling down on their arguments.

TH: What types of maintenance practices can founders put in place to keep a relationship healthy in the long term?

That’s something many founders overlook until they come to see me, and then we work together for six months or a year, whatever the case will be, and after we’re done they’ll keep the same time of our recurring meetings. It helps you maintain accountability, have a better understanding, and update your expectations of the other person, all of which are absolutely needed on this journey.

I think there needs to be an ability to pause in difficult events and commit to revisiting it in next week’s meeting. Don’t let things escalate, because when they escalate that’s when more damage is done to your trust and it shuts down future conversations.