Founders Wallet: How an Advertising Entrepreneur Spends His Startup’s Money in a Month

(All figures have been converted from pounds to dollars)

When Andrew Curtin set out to start his company in September 2020, he had big ambitions. “I was trying to be the next VaynerMedia,” he remembers. But instead of building a traditional creative agency, he identified a space he thought could be even more lucrative: B2B branding. He launched Chronicmedia, a branding agency that helps employers tell their stories to increase talent attraction and company morale.

“I’m the type of guy who likes to put in a pound and get 2 pounds back, and employer branding is very measurable,” says Curtin. “There isn’t a whole lot of competition.”

To get Chronicmedia off the ground, Curtin’s father gave him $6k and said, “This should cover you for 2 months, go find some clients.” While he’s only in his 2nd year of business, Curtin has lofty goals, telling The Hustle, “I reckon in the next 2 years I could get this to a $16m company with a team of 35 people.”

And the odds might just be in his favor — a post-pandemic job market and the “great resignation” are making employers work harder to obtain top talent. “It’s a very candidate-driven market right now — there’s a lot of mobility of labor,” Curtin says. “It’s really tough for HR departments to attract and maintain people and I think it’s probably going to stay that way for a long time.”

Here, Curtin lets us inside his business — and his wallet — and breaks down average monthly expenses, salary, revenue, and more.

HOW HE SPENDS IT 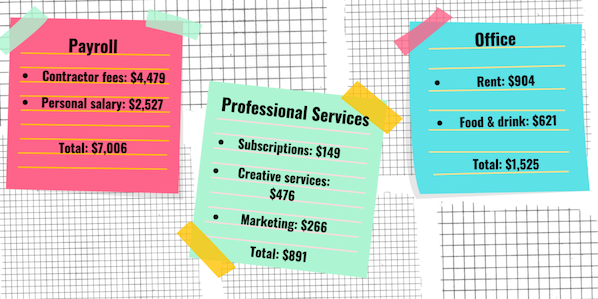 Each month, Curtin aims to keep cash on hand for himself and his business:

HOW HE TRACKS IT
Curtin uses his Starling Bank statement to automatically tag, sort, and track monthly expenses.

Curtin is doing something right — his 2022 projected revenue is set to be more than 5x that of 2021. He is on the cusp of a contract with a client that alone would bring in $330k-$660k with the option to extend. “Because of the positioning I picked with branding for construction and management consulting firms, it has opened new doors and prospective clients are coming to me with bigger problems that require bigger budgets,” he says. “I’m going to be at the stage soon where I won’t be accepting a contract unless it’s a minimum of $200k.”

In 2022, Curtin plans to bring on 7 employees to company payroll — 2 researchers, 2 brand strategists, an account manager, a project manager, and a video editor — along with 4 contractors.

His long-term objective is to use his platform to build a bigger B2B events company, but not before he reaches his financial goals: “I won’t do that until we smash a target of being a $16m company… Have to have baby No. 1 before baby No. 2.”

He’s also launching a newsletter in hopes of growing his network within the agency world to set him up for a successful expansion. “I’ve made so many mistakes,” he says, “and that’s what the newsletter is going to be about, the many stupid mistakes I’ve made and how I can learn from them.”

All in all, Curtin’s spending for November 2021 totaled… drumroll…