What Is Java: The Beginner's Guide to the Java Programming Language

Learn the basics of the Java programming language and what it can do.

FREE RESOURCE: AN INTRODUCTION TO JAVA

An all-encompassing beginner's guide to help you learn more about one of the world's most popular programming languages. 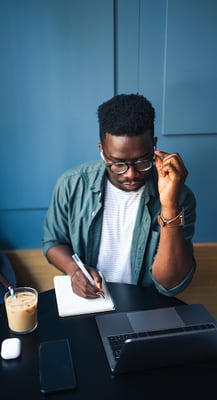 This post will discuss what Java is, its history, and the industries that use it. Finally, we will wrap up by looking at a couple of brief code examples in the Java programming language.

In Java, the code is first compiled and then translated into a binary form called Java Byte Code. Finally, the JBC gets compiled and interpreted into the native language needed to run in the target operating environment. This contrasting behavior is a significant benefit for developers as it means they can write code once and run it anywhere.

This feature became a popular concept, highly sought after by developers; it is known as the “Write Once, Run Anywhere” (WORA) philosophy. The WORA philosophy was brought to popularity as Sun Microsystems' slogan in 1995.

The following video highlights some key details on the various aspects of the programming language that are important to learn.

Now that we have covered the basics of what Java is, let's briefly look at the history of Java.

The birth of Java happened in 1991 when James Gosling and his team began work on creating the language at Sun Microsystems. Shortly after, the team switched their focus to developing the language for the newest niche market known as the World Wide Web. By 1995, Java was released to the public for use in various applications, from the internet to computer programming.

Java stood alone as a programming language because it handles code translation differently than other languages. Unlike other programming languages, it goes through two major steps before running in its environment. Most programming languages only translate one time, either by compiling the code or interpreting it. This difference made a significant impact on the rapid growth and popularity of the language.

Java began as a project for connecting systems, such as connecting office devices on a network and creating interactive television. However, the switch to using Java for the internet came on a heel-turn and led to Java taking the lead as the number one programming language for the interactive web or — web 2.0 as developers commonly refer to it in discussions.

JavaScript served the same purpose and, at first, was not very popular; however, as a marketing ploy to build on the popularity of Java, the language took the name JavaScript. This marketing ploy came after testing out several other names first, and the change to JavaScript helped push its popularity and growth.

With this new up-and-comer on the scene, Java applets slowly began to lose their hold on the interactive web. Finally, after many years, Oracle announced in 2016 that they planned to depreciate Java applets in their next release of Java (JRE 9). As a result, in 2019, support for Java applets ended, and Oracle excluded it from the release of JRE (11).

With this decision, the landscape for Java changed dramatically from one that focused primarily on the interactive web to other areas of interest. Of course, the language had already been in use elsewhere, but the discontinuation of Java applets meant that the language grew in popularity for other technologies and industries.

We have discussed Java’s history through the years and where it is today. Now let’s look at the current role it plays in today's technology and some of the industries that use it, and what that means for you.

Java is still very popular and has expanded its reach into several industries. Today Java is used for programming complex technologies from mobile applications to AI programming and more. For the rest of this section, we will dive into the various fields of technology that use Java as a programming language.

What is Java used for?

Due to its nature, the Java language is an excellent choice for building complex applications with multiple interfaces. It also works well as a programming language for mobile applications because it works great for connecting different devices.

Artificial Intelligence is a type of software designed to handle complexly automated calculations. AI software is used in various industries such as credit companies, banking, Amazon’s Echo, and other smart devices — just to name a few.

Big data is an industry that works with tracking and reporting data for various needs. Many companies use data analytics to track users, contacts, products, sales, and more. Java also makes it easy to create visualizations to represent this data in a way that is easy to understand and digest.

The usefulness of this benefit makes it an excellent choice for big data as it helps to simplify the process of working with large amounts of data.

Because Java is flexible enough to work in many different operating environments — according to the WORA philosophy — it is an excellent choice for developing software. In addition, by writing the code once and running the software anywhere, developers can simultaneously create software for several systems.

Because of the compile and interpret nature, any software written in Java can be quickly run on any device with a Java Virtual Machine installed on it. This ability is a significant reason why Java is still prevalent in multiple industries and why you can rest assured that Java is here to stay.

Blockchain sciences have grown in popularity over the years, thanks largely to the emergence of cryptocurrencies. But blockchain technology is not used exclusively for cryptocurrencies; in fact, its first proposed use was to track timestamps on scientific papers.

The benefit of this technology was that through cryptography, the timestamps — and related information — on research papers were guaranteed to be accurate. Since its popularity boom, blockchain technology can now be found everywhere, including mobile phones. This means that Java is a perfect fit for mobile blockchain sciences, much like mobile application development.

Internet of things, a term that feels ambiguous at the very least, describes the connection of physical devices that need to communicate and share data. The need for devices to communicate has grown and been accomplished in various ways. An example of this that underlines the necessity of device connection is airplanes and traffic controllers.

Thankfully the initial intent of creating Java as a programming language was to connect devices in this exact way, making it perfect for the job.

Developers still use Java to create and add interactivity to web pages and thus improve the user experience considerably.

What is the difference between Java and JavaScript?

Due to naming similarities, there has been a bit of confusion between Java and JavaScript over the years. The fact, however, is that they are as different as the words ham and hamster. They only have one or two similarities: they are both used for programming software, and they both have a name consisting of the word Java.

Outside of those two points, the truth is both languages are very different, with one that stands out above the rest. JavaScript is an interpreted language only, whereas Java is a language that first gets compiled and then interpreted into a working executable file. This separation may seem like an insignificant difference, but the truth is that it changes the way programmers handle the task of development.

Java has a few unique features that are important to consider when going down the rabbit hole that is the world of Java programming. Before wrapping up this post, let’s look at some of the main features and discuss how they affect you and your programming needs.

Java is not platform-dependent; developers can write code once and run it anywhere needed.

Everything in Java is considered to be an object. This means that everything has its behavior and or state and adds structure to the language.

The Java language has two stages in its execution process. First, it is compiled and then interpreted into a format usable by its target operating system.

The security of the Java code is strong thanks to the two-stage execution process. Because the code runs through two steps, it is more secure and safer from attempts to hack or modify the code in malicious ways.

Java is built to adapt to changes as necessary to help reduce memory waste and increase performance speed. This makes for a very robust programming language with the ability to check for errors or tampering on compilation. With the JIT (just-in-time) compiler, the code gets translated into bytecode which is then interpreted by the target machine.

Java is a language built with distributed operation in mind. It can connect devices over the internet and prompt them for specific program functions. This means that many devices — such as computers — can run the same program and tap into each other for resources and information.

Java is a multithreaded language with its own set of synchronization primitive objects. These objects make using the multiple threads in unison more manageable, resulting in simpler use and better performance.

You are now armed with everything you need to know about the history of the Java programming language. You also learned the primary difference between Java and JavaScript, eliminating any confusion. Finally, you also know what it is used for, the industries you can find it used in, and some of its standout features. Now you can get started using it in your own web applications.