Learn what Python is, resources to learn it, and how to implement it in real-life situations. 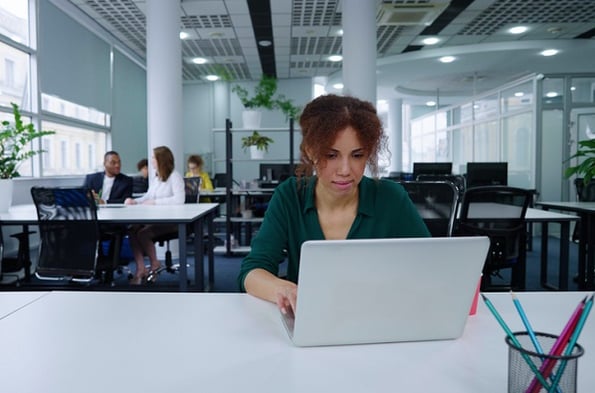 That depends on which Python we are discussing: the type of snake, The Monty Python show, or the programming language?

Today, our focus is on the programming language (we’ll save our thoughts on the best Monty Python skits for another post).

In this post, we’ll briefly discuss what Python is, what goes into learning it, and how and where it is used. We'll also discuss some resources for learning Python and which roles use it as a primary aspect of their work.

Without any more delay, let's slither right into this.

Over the years, Python has grown in popularity and functionality, resulting in its flexibility of use. The ability to quickly make and test changes to the programming code for software makes it an easy task that can be handled on the fly if needed.

Python is not only easy to use — but it’s also easy to learn. These two factors have led to this language becoming the go-to language for beginners learning software development. Furthermore, its versatility as a general-purpose programming language makes it suitable for the needs of many industries.

In this next section, we'll look at what goes into learning Python, such as prerequisites and resources you can tap into.

Is Python easy to learn?

The short answer to this question is a resounding yes. Python was built with simplicity in mind to make programming a smoother process for developers. As a result, the language is equally simple to learn. Having been around for over two decades, it is a great gateway to learning other languages.

If you are brand new to programming, there are resources on how to start coding. However, even if you aren't new, there are a few things to consider when learning any new language, and Python is no exception. Experience has proven that we should always ask a few questions. Let's look at those in a Q&A format.

This language is discussed on many platforms, starting with the Python Community Forum, but not limited to Stack Overflow. Of course, these are not the only places help can be found, but they are probably two of the most powerful resources to have under your belt. Finding resources to help you locate answers, tips, tricks, and continued education is arguably the most important skill you can have.

In my years as a developer, one of the most important things to consider when learning a new language is its resources. Let’s go over some valuable resources for learning Python below.

Udacity is an online platform built for learning technology topics. It offers courses for several different topics, including but not limited to courses on Python. It also offers both free and paid courses, and its Introductory Python course is currently available for free.

Codecademy is a very popular learning platform that is used to study and learn all things programming-related. It offers a fully equipped integrated development environment meaning you can practice and learn without the need for setup on your computer.

FreeCode Camp is a site that offers free programming courses and certifications in many different languages and many YouTube videos on the subjects. FreeCode Camp hosts most of its educational videos on YouTube for the sake of simplicity.

The Official Docs Python Tutorial is the source from the horse, designed by the Python community. This documentation is designed to make the learning experience simple, with the tutorial broken down into very precise steps. But due to the fact that the course is a deep dive into the language, it can come with a bit of a learning curve.

Understanding how popular a language is in a given industry is important, and this is true of any industry Python is used in. However, identifying a programming language's versatility across industries is also important, as it helps identify steady long-term viability, something that Python has in spades.

This long-term viability ensures that in your journey to learning Python, you will always have resources that you can take advantage of and leverage your skills in a meaningful way.

The second factor you should consider is the prerequisites of the process, such as needed software or text editors and IDEs (Integrated Development Environments). A complicated setup process will likely mean a complicated learning process.

In this case, prerequisites for learning Python prove simple enough. In fact, it's so simple that learning it can be done from some smart devices in today's age. So, you only need to have access to some basics. Let's go over those quickly. 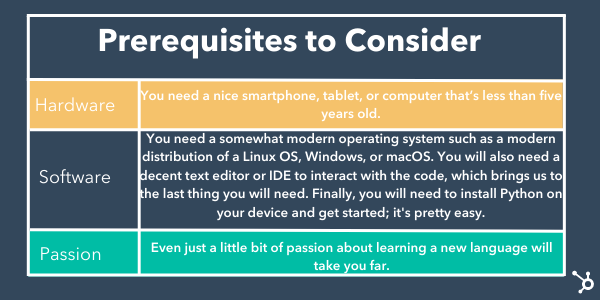 The benefit to this setup is seen in its simplicity of implementation and felt in learning it.

How to Use Python

Using Python requires — first and foremost — installing the Python software on your computer or compatible smart device. From that point, there are many different ways to use Python. The most common is to use Python with frameworks like Django and Flask, which further simplify the use of Python when programming software.

The installation process varies based on things like frameworks and operating systems. This video walks through the steps to install and set up Python on your device.

Another great source of information, especially when troubleshooting, is Stack Overflow, which has a massive community of developers you can reach out to for help.

Let's go over where you can use Python in today's technological landscape, what it's used for, industries, and the roles that use it.

The short answer to this question is everywhere. Python is in everything, from instrument programming to computer software, web development, and mobile applications. So, let's wrap up this post by covering Python's landscape over the years and where it is within that picture.

Python is great for almost any development need, whether it be programming for servers, operating systems, software, games, and much more.

Let's look at some of its common uses.

Python has been used for software development since it was first released and continues to be very popular for that purpose. Moreover, it is used to create software for several different platforms since it is compatible with many operating environments, computer operating systems, mobile, and even instrumental runtime environments.

Python is well suited for data analysis as it works well for creating effective visual representations of complex data sets and analyzing data. These two aspects of its capabilities make it a staple in the data science industry.

With data sciences, access to a wide array of data visualization methods such as bar graphs, line graphs, and pie charts is beneficial as it helps simplify the process. In addition, the ability to use one language to manage how information is sorted, managed, and viewed makes this language invaluable.

In many ways, this is similar to its use in data sciences since machine learning is a form of data science. The difference here is that less visual representation is needed — though it is often still used — instead, the developers focus on processing data in a meaningful way for the software to utilize intelligently. With machine learning and AI programming, the key is in automation, which, as we discussed earlier, is an easy task for Python.

This industry has recently become a heavy user of the Python language, which has always handled blockchain sciences. The emergence and continual growth surrounding technologies such as cryptocurrencies and NFTs have led to its growth in the industry. Its ability to handle all aspects of blockchain technology makes it a staple in the industry.

Several industries use Python for its programming benefits, many of which have been using it for a long time. As a result, many people use it for some reason or another; let's discuss what roles commonly use Python for their needs.

Python is commonly used to handle game engines, physics, and object scripting in the game development industry. These tasks control the in-game environment, character movements, and much more.

In web development, Python can create the user interface and handle data logic for the web application. Python can handle everything from how page requests get routed, dynamic data for pages, authentication, and user-submitted information processing. This versatility makes it a great choice for web developers.

Data analysts use Python because it is a great one-use-fits-all programming language that provides visualization for complex data, simplifying their work.

This role is akin to technology security work. This role aims to identify any software vulnerabilities and weaknesses that may have been missed or caused by updates. Commonly referred to as "Pen Tester," this role is vital for ensuring post-production security, and Python is a great language for interacting with software in a way that can help expose vulnerabilities.

Cloud computing has grown in popularity so much that it has also maximized all that Python offers. One of the biggest benefits is that Python is a popular language; you can find it everywhere, making it a great candidate for open source and contract work. Its versatility also makes it a great choice for handling all of the complex needs of any Cloud service.

Now you have the information you need to understand Python's uses, industries, and even whether or not it is a viable choice for your needs. As a next step, you should try your hand at it. After all, practice makes perfect.