The Average WordPress Developer Salary: Are You Getting Paid Fairly?

If you're a WordPress developer or are looking to become one, we have some good news — your skills are in high demand. In fact, over 400 million websites are powered by WordPress which represents more than a third of all sites active on the internet. 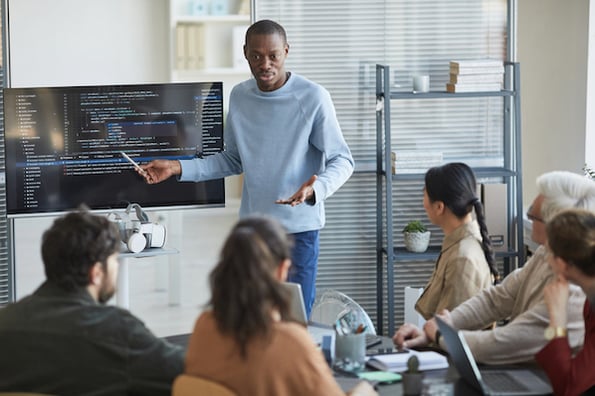 WordPress development is a lucrative industry that attracts growing companies and independent freelancers. The field covers a broad scope of work — including both frontend and backend website development — and salaries for WordPress developers vary between roles.

Because it’s such a diverse field, there is no prevailing market rate for a WordPress developer salary. But, there are multiple considerations you should account for to maximize your earnings.

With that in mind, you may be wondering what the average salary is for a WordPress developer. And — perhaps more importantly — you may be curious how you can increase your earnings over time.

In this post, we’ll review what the average WordPress developer makes, as well as what you can do to increase your salary and grow your career in this space.

Why hire a WordPress developer?

With a 42% market share, WordPress is the world’s top content management system and a popular choice for those looking to build a site. That being said, building a website can be a tall order, and some people may not have the knowledge, time, or patience to build a site on their own.

Because the work and industry vary, there is no standard for how much a WordPress developer makes.

The term “WordPress developer” is often used as a catchall phrase for professionals working on WordPress websites. This includes everything from building the site, to managing it on a day-to-day basis. Because of this discrepancy, the salary for one role may be vastly different from another, even though the job titles are similar.

Another reason to compare salaries is that many people find it uncomfortable to discuss salaries. According to a survey done by the compensation software management company, Beqom, 41% of employees were uncomfortable talking about pay. However, knowing the salary range for WordPress developer jobs can help you maximize your earning potential.

Being armed with the knowledge of industry-standard compensation can help you negotiate during interviews, so you get paid a competitive rate. 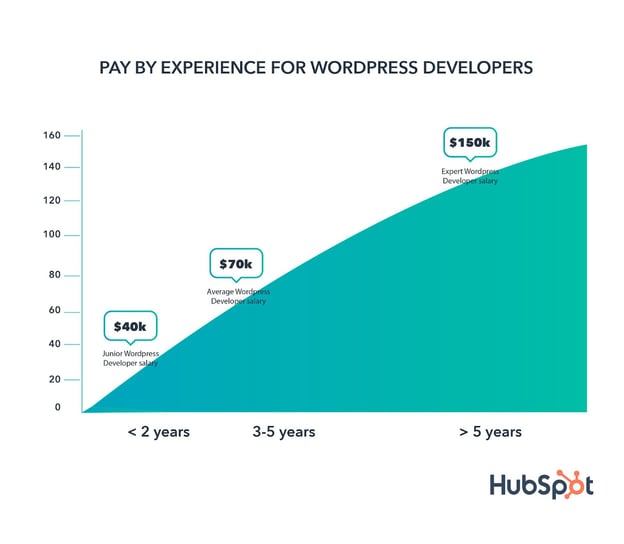 Although many freelancers charge on a per-project basis, freelancers are often defined by their hourly rate. For this example, let’s review the average salaries for two types of freelancers: general freelancers and specialists.

For this section ,we looked at data from various general freelance marketplaces such as Upwork, Fiverr, and People per Hour.

According to Upwork, the average U.S. freelance WordPress developer charges an hourly rate of $70, with rates ranging between $30 to $175/hour. When you include freelancers from other countries, the average goes down to $15-28/hour.

People per Hour found that of the 3,281 freelance WordPress developers surveyed, the majority make below $35/hour.

Note: The data collected were from marketplaces with freelancers from all over the world. There is no vetting process; anyone can sign up and call themselves “WordPress developers.”

If you live in a country with a higher cost of living, such as the U.S., salaries for general freelancers may seem low. However, they increase significantly when you look at specialized freelance marketplaces.

Specialized freelance marketplaces — such as Codementor or Codeable — require freelancers to take tests to prove their skills before they can be hired for a job. Because of the vetting process, you're guaranteed to hire freelancers with more expertise. Thus the rate is at par with standard and average freelance WordPress developer rates.

Let’s look at Codementor’s rates. Codementor charges an average of $61-80/hour (worldwide). The average goes up to $81-100/hour when only North American freelancers are considered.

On the other hand, Codeable charges $70-120/hour, depending on the project’s complexity, scope, and urgency.

If you’re interested in freelancing, check out our complete guide here.

How to Increase Your Salary as a WordPress Developer

Now that you know the market rates, how does your salary measure up?

Knowing how much other people are getting paid is just the first step, but the knowledge isn't worth anything if you aren't using it. So, how can you increase your WordPress developer salary?

If you want to earn more as a freelance developer, it’s as easy as increasing your rates.

The thing about increasing your rates is that it often sounds easier said than done. The most common reasons holding you back are not knowing how or when to increase rates or worrying that you’d lose your clients when you do.

First things first — how do you know when to raise your rates?

If you feel constantly overworked, have an almost 100% close rate, or feel like your hourly rate is decreasing, then you may need to charge more.

Secondly, if you're worried that charging higher rates would drive clients away, remember that there will always be people willing to pay for your service. The best-fit clients are usually willing to pay more and are easier to work with.

If you're uncomfortable raising your rates, here are some tips:

If you charge an hourly rate, Fred Meyer of WPShout suggests not taking anything less than $50/hour for U.S. WordPress developers. He suggests $50-60/hour as a good starting rate, but it should increase to $75/hour within a year and $100/hour within two years.

There are different pricing models freelance WordPress developers can use. Whether you choose to charge hourly or per project, remember to highlight the value you bring to a project.

2. Specialize in a WordPress area.

As a WordPress developer, you will never have to worry about work because you can get into fields such as plugin or theme development, designing the website’s frontend, managing the backend, and more.

However, one way to earn more is to serve a smaller, more specialized market. It may seem counterintuitive to eliminate 90% of your potential customers, but when you establish yourself as an expert in a specific field and limit your client base, you can command higher rates because you provide a unique service.

For example, you can choose only to serve WooCommerce business owners.

WordPress developers have three choices to specialize in — core software, plugins, or themes. You may work on all of these areas, but you'd likely reap more benefits by becoming an expert in one.

Let’s see what each area covers:

Besides niching down, improving your skill set can also help you earn a higher WordPress developer salary.

You can brush up on WordPress programming languages such as PHP, JavaScript, HTML, and CSS. You can enroll in online courses to learn additional skills and get certifications.

You can also read up on WordPress-specific resources, such as:

Besides beefing up your technical skills, you can also benefit from developing your soft skills. Also known as core skills, soft skills relate to how you conduct yourself in professional environments.

As a freelancer, besides doing the technical scope of work, you’re also responsible for everything that goes into the business aspect, such as looking for clients, brokering deals, or deciding your rates — all of which require soft skills.

Some soft skills freelance developers should have are:

When you come off as a professional, clients are more willing to agree to increased rates because they find you more reliable and capable of producing results.

Freelancers are nothing without a toolset that makes their jobs easier.

Freelancers should have software for:

You don't necessarily need to have all of these, nor should you choose the most expensive tools. Instead, choose freelancer tools that automate the less desirable aspects of running a business.

As a WordPress developer, you will have clients asking you to build them websites.

Besides web hosting, building websites will often require products such as form builders, page builders, or backup and migration solutions. Some clients will have their preferred solutions, while others will ask for your recommendations.

Since you’ll be suggesting solutions anyway, why not earn passive income from those recommendations?

This is called affiliate marketing, wherein you get a percentage commission for every sale a customer makes using your affiliate link. Check out HubSpot’s affiliate program as an example.

WordPress Developer Salary: Are you getting paid enough?

WordPress development is a very profitable field, especially at a time when businesses need websites to compete in their industry.